At the beginning of the month, I presented at the AHRC research network conference – ‘Culture, Capital and Communication: Visualising Chinese Borders’ (CCC-VCB) at Manchester Metropolitan University (yet to blog about this). I’ve been a network member of the project since it began in 2014, where it’s taken me to Hong Kong and Taiwan to participate in pivotal research lab sessions.

Curated in conjunction with the conference was ‘INHERE’, a solo exhibition of the work of Hong Kong artist Enoch Cheng (4-8 April 2016) at Grosvenor Gallery, Manchester. I’ve met Enoch many times through my time as Research Curator at Centre for Chinese Contemporary Art (CFCCA) (2012-2014) and various research trips to Hong Kong over the years, where at the end of last year he took part in the Whisper Residency programme at CFCCA to create ‘Funny Water: Last Time at Mancunia’.

Honest, articulate and a big thinker, Enoch is dedicated to a physical and emotional engagement with the space and place within which he transitions or resides, always acknowledging the wider global contexts. This experiential representation, reflects a unique perspective of a place or moment in time underpinned by references from history, literature, film and popular culture, where for ‘INHERE’ he considers ‘the notion of becoming in relation to identity construction and relocations of place.’ 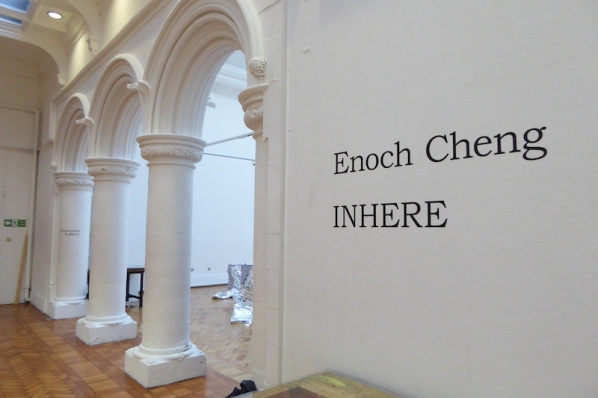 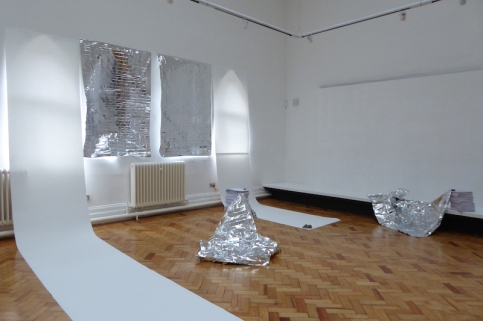 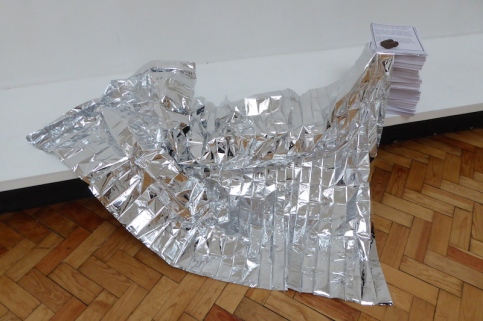 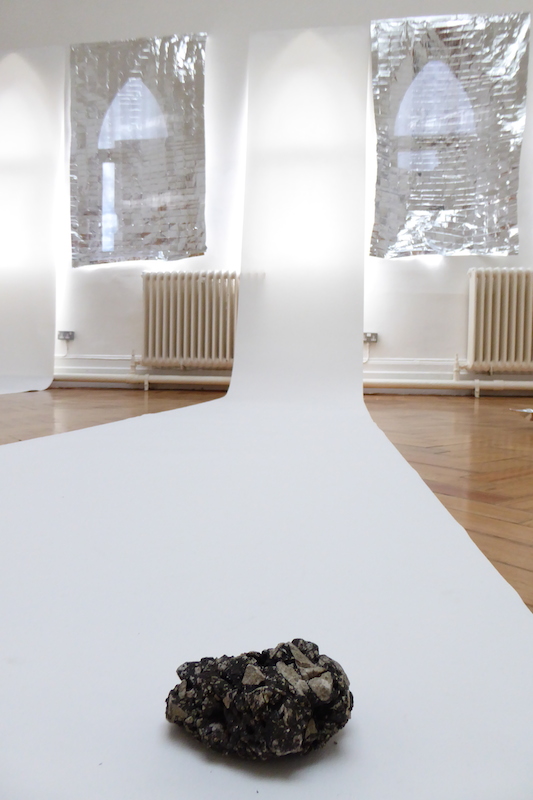 ‘INHERE’ includes Enoch’s new film installation From Now On (2016, video installation, 14 mins, colour) and his 2015 film Operation Pina4 (video installation, 25 mins, colour), both investigate border crossings experienced when people are forced to consider their social role – from a new citizen in a foreign land (which I know very well) or as a character in a new story. Often communicated through verbal or written language, on paper or on screen, it is this idea of changing roles, changing place and changing socio-politcal contexts, which consumes Enoch’s practice.

‘Operation Pina4 depicts an actress who is casting for a sci-fi disaster film set in 2003. Dialogues in the audition jolt her memories when she recalls being a stand-in actress in prolific Hong Kong director Wong Kar Wai’s film-set on one fateful night in 2003, the night when the Hong Kong super star Leslie Cheung committed suicide during the episode of SARS.

“Were such memories once real? Or is it just a story?” – Enoch Cheng

People in front of her look oddly familiar, overlapping with people she encountered from the past. In this short, the actress experiences the passage of time, but no one is sure if it is forward or backward. At this very moment, could she be simply playing a role from the past?’

‘In From Now On, the protagonists similarly negotiate their “temporo-spatial” positions and roles. Three professional Chinese actresses are asked to perform the text in a casting session, using the government announcement broadcasted in Vietnamese in Hong Kong during the 80s and 90s as the script. Speaking in a language completely foreign to them, they have to deliver different roles according to instructions. To overcome the language barrier – like how a child first learns to articulate words – they memorize the sounds of the text. At the same time, they assume the new given roles with their acquired acting skills, such as facial expressions, sound projection and bodily gestures. Inevitably, they delve into their own living experiences, memories and imaginations. The result is an image where these formally trained actresses shift in between the border of themselves and the characters, drifting from their own state (sometimes derogatory) for the Vietnamese people.’ 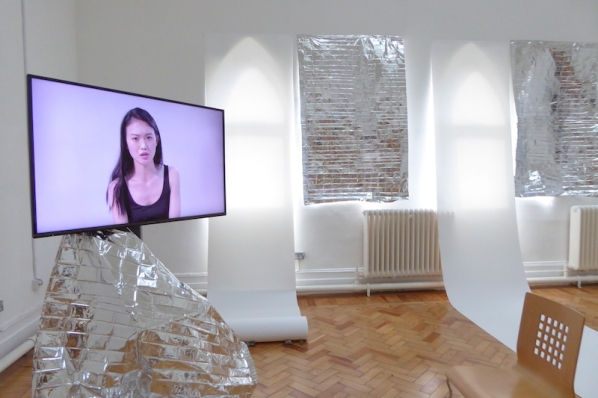 The films are installed in a disjointed reflective, paper landscape. Stacks of A4 sheets stand in towers, printed with English and Vietnamese text – the government announcement broadcasted in Vietnamese in Hong Kong during the 80s and 90s, the focus of Enoch’s film From Now On (2016):

“From now on, a new policy regarding Vietnamese boat people has been implemented in Hong Kong. Hereafter, those Vietnamese boat people seeking to immigrate into Hong Kong as immigrants due to economic reasons will be considered illegal immigrants. As illegal immigrant, they will not have the ability to settle in a third country, and they will be detained until repatriated to Vietnam.”

The piles of scripts throughout the space reinforce the notion of the “temporo-spatial”, interrupting the space as if borders in place, also highlighting the language barriers that come with border crossing, and the limitations, boundaries and overcoming of personal borders. Ultimately, what is our identity within and beyond these borders? (Apologies to artist Heman Chong for use of “beyond” – a word he loves to hate using. It’s application in the art wold is somewhat overplayed much like post- or post-post as a prefix).

Whilst Enoch was installing the exhibition, we spoke about his use of silver foil survival blankets, where he was concerned about their connection to Ai Weiwei’s recent work and representations of the global refugee crisis, more specifically their presence at the Berlin ‘Cinema for Peace’ fundraiser event at Berlin Konzerthaus. Every attendee, from the average joe to high-line celebrity, was given a gold survival blanket by Ai Weiwei. They were worn, adorned, idolised where images of the occasion consumed social media, going viral in the press. Ai Weiwei was immediately questioned for what I see as a clear publicity stunt. It became less of a reminding opportunity of the refugee crisis at large to create a community of change and, in my opinion, more about celebrity solidarity, “celebrity as art” (I’ll be blogging about this soon). Therefore, and in response to this, Enoch was concerned that his use of survival blankets would be linked to the object’s new symbolism as part of Ai Weiwei’s art practice. Even if this connection was made when viewing ‘INHERE’, it would never be translated in the same context as Ai Weiwei as first and foremost there’s not celebrity presence to set the scene and no clear interplay with media and press. Instead, I see the blankets highlighting alternative understandings of border crossing representation and an inherent need of mankind to survive…survival in different places and with different priorities. For Ai Weiwei, perhaps his survival comes through the need for celebrity? Whereas for Enoch, it is definitely about his critique and translation of survival, past and present…and the representation of our individual and collective identity during this process of physical and emotional border crossing.

Enoch Cheng is an artist, writer and director. His practice involves the moving image, installation, theatre and performance. Concerned with the everyday subtleties in contemporary urban lives, his works explore recurrent themes of place, travel, fiction, memory, time and destination. His works have been shown in festivals and exhibitions in Brazil, China,Germany, Hong Kong, Iceland, India,Italy, Taiwan, Thailand, and UK. He received his MA in Creative Writing at Goldsmiths, London and BA in English Literature and Art History at the University of Hong Kong. 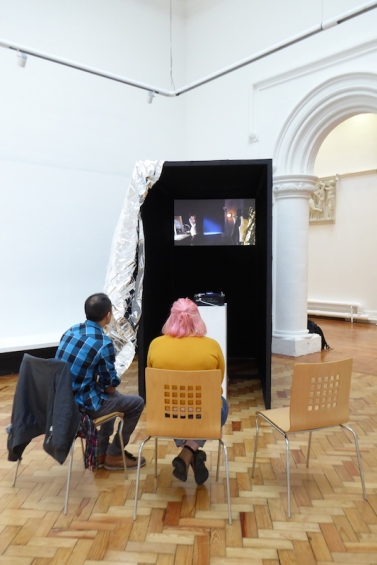 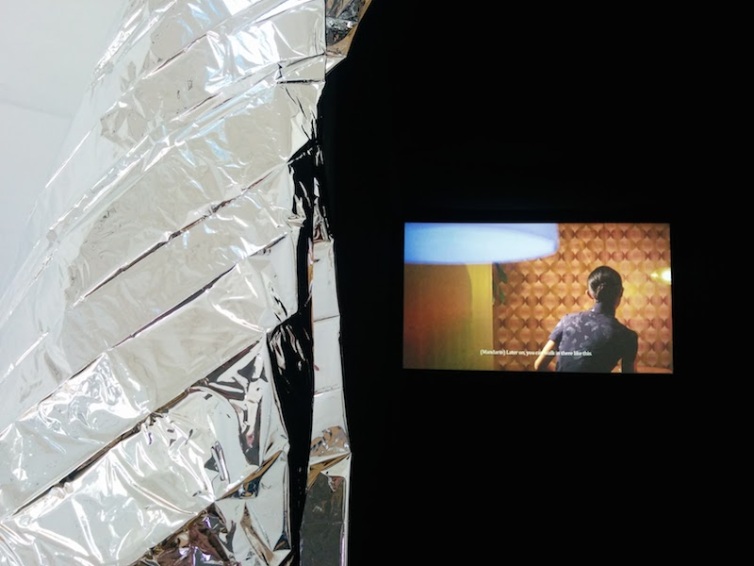