“No knee slides.” The words I was told by the gallery assistant at the South London Gallery when entering Heman Chong’s exhibition ‘An Arm, A Leg and Other Stories’. I walked across the gallery floor, lined with black business cards, an installation, which now begged the question, why no knee slides? Did a child get really bad paper cuts? Blood on the art floor?! Who knows, but they were certainly slippery underfoot. It immediately made me think “no fun allowed” and that this exhibition was to be taken seriously. In reality, the strange, comedic verbal opening (not part of the exhibition by the way) reflected the intellectual parody within the show and its multi-narrative voice – a critique of the (art) world at large and a new (in part visual) style of art writing. 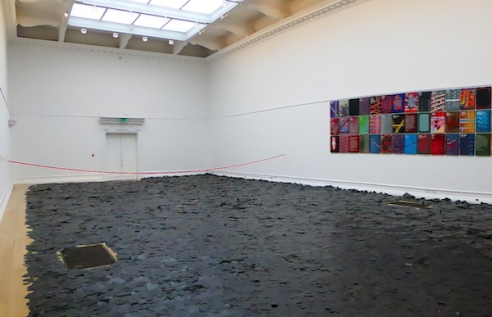 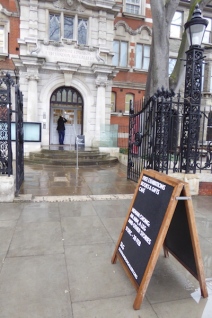 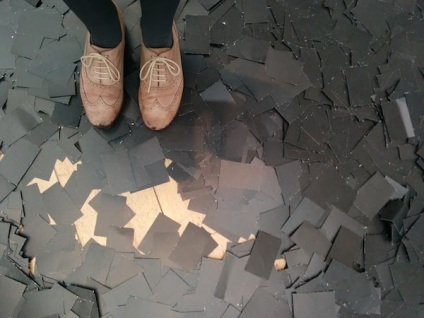 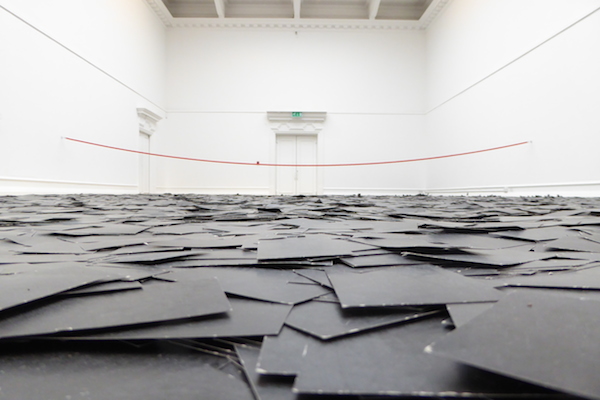 You say “business card”, I think of the emblematic scene in the film American Psycho (2000) where every details of the card is caressed and emotionally acknowledged. A piece of card laced with intent and power, acting as a conscious status symbol…yet disregarded within an instant as the phone number, email address or twitter handle gets added to your digital device. Are business cards even essential in 2016? I know from working in China they’re expected and a sign of earned “guanxi” (building relationships), but isn’t that what Facebook is for? 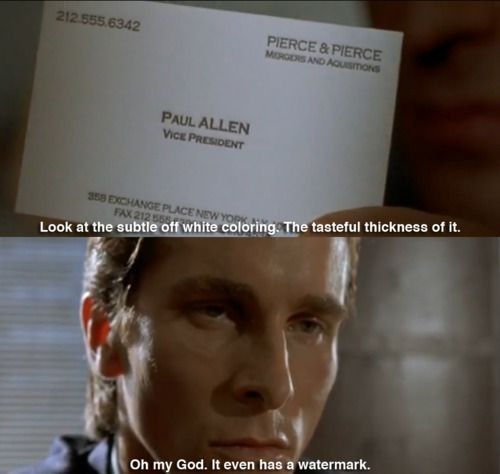 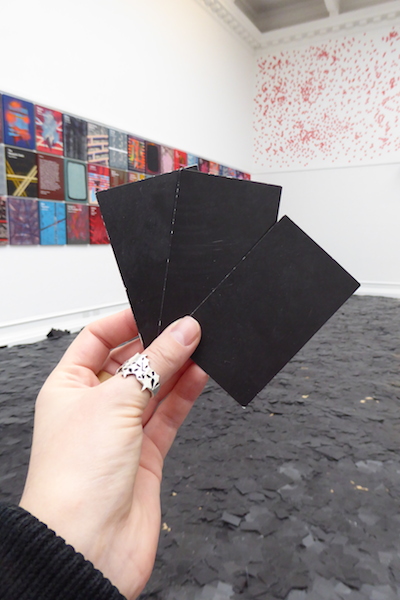 The wealth of black business cards lining Heman Chong’s exhibition – ‘Monument to the people we’ve conveniently forgotten (I hate you)’ (2008) – made you consider the many levels of connection-making we engage in on a daily basis, and how empty, bleak and soul-less this process can be – rather than human. There are no names on Heman’s black cards…no details, no titles, no roles…no opportunity for self-referencing, implied social hierarchies, design critiques or personal disappointment as you assess the card and think “they do something more interesting that me”. They are devoid of human representation. What does a business card even mean today? The potential of a future happening? Future meeting? The potential of the new? Does it represent more than I am? Making connections to lead you to that next step in life (you think) you want? All the business cards I receive or have been given (I won’t say connect as that implies a finding and searching inertia to the process), sit in a pile on a side table in my study, next to a half-organised, categorised box of them, waiting to be…well, I don’t know what they’re waiting for…they could pretty much be on the floor as if a carpet of contacts (I want to say contracts, because they are like a contract of exchange) like in Heman’s show for all that they’re worth.

Going back to the exhibition, meeting your waist, about two-thirds down the gallery space, a red rope divides the room in two to impart a boundary. It stands as a clear sign of the power of the art institution…their power to restrict and control viewing and what is viewed. ‘Rope, Barrier, Boundary’ (2015), is a new work by Heman Chong, a reference to the red ropes used in galleries and museums to create a performance space and third exhibition area for a weekly intimate performance called ‘An Arm, A Leg’ (2015), which I didn’t end up experiencing as I went to the gallery on a Tuesday. For some reason, I did think in my head that it was a Wednesday. I’m always wishing time away. The red line cuts through the space, leaving a pinch of wonderment as to why the stage is left empty. What are we waiting for? Apparently, a verbal performance between an instructor and audience member – a memory game, where the audience member is helped to memorise and recite a 500-word short story written by Heman Chong. There is no given timeframe and as the artist states, ‘the only way you can read this story is to participate in the performance’. I’m still waiting for story time, waiting for the narrative escapism that I’ll never experience. 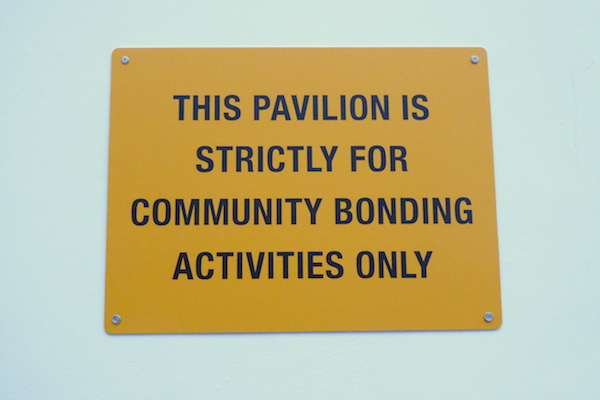 An artist statement punches into the space – black typography on a yellow metal sign – ‘THIS PAVILION IS STRICTLY FOR COMMUNITY BONDING ACTIVITIES ONLY’ (2015). A re-appropriation of a sign the artist saw in Singapore, acting here as an artist advertisement implying, again, a sense of parody and play in the space yet, like the red rope, making a clear reference and interjection to the hard lines of institutional authority. At this point I questioned whether he was questioning Singapore and certain cultures of Asia, and the art system. The latter is obvious. Is the red rope a reference to the “red line” of power in more socio-political terms? As I ask that question, I realise it’s such a cliche… 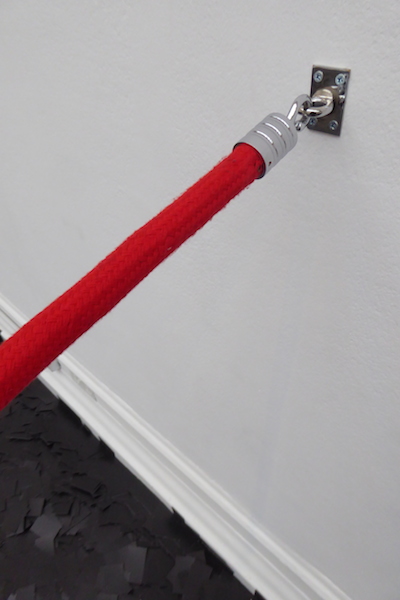 The amalgamation of three different painting series – ‘Things that Remain Unwritten’, ‘Cover (Versions)’ and ‘Emails from Strangers’ – line the right-hand side of the gallery space bringing together representations of books, spam emails and purely abstract book cover designs. I felt like I was browsing a giant’s bookstore, Penguin publishers on steroids, drawn in by a book’s cover not by its contents, realising my eye was always taken to hyper-colour abstractions or those books with textual, personal affiliation through word association. Had I already read its contents? The spam emails raised questions as to the value of words and language, bringing their collective narratives into focus as if a page from Heman Chong’s latest novel, which I think would be a great read…but only memorised and verbally, right? 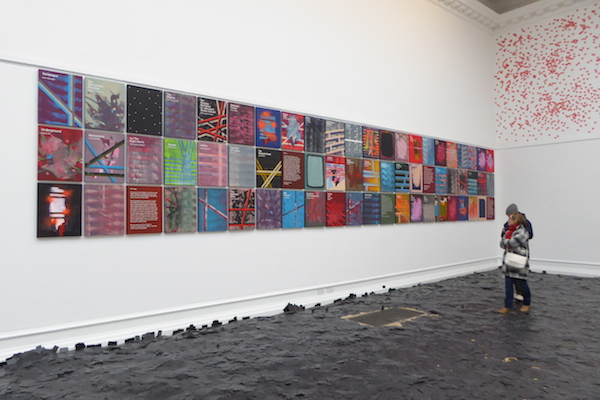 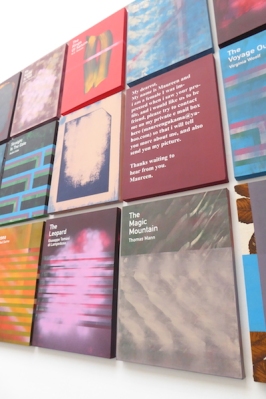 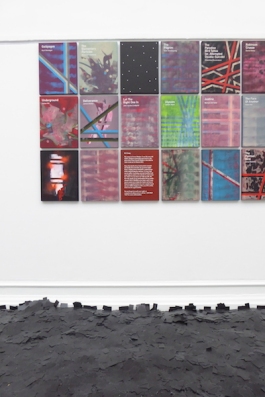 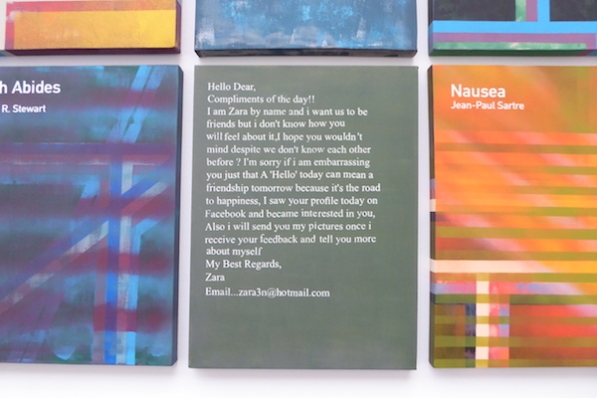 When I stepped out of the main gallery space to peruse the artist’s intervention in the bookshop, I got distracted as I bumped into a good friend’s younger sister who is a gallery assistant at SLG – small (art) world as always. She is currently studying curating at Goldsmiths. So engrossed in chatter, I completely forgot to go back to look for the 38 second hand books he chose to place and re-sell through the bookshop. Instead, when speaking to my friend’s sister, we watched two art students clear areas of the business cards in the gallery floor to create a smiley face – art engagement aftermath and there’s the humour again… a symbol of happiness, marked in a symbol of capitalism? At the same time, a lady kicked up the business cards with her feet whilst staring at the paintings saying “I just don’t get what I’m supposed to think…do the contexts of the books even matter?” Maybe they don’t, maybe their more for the artist than us, but their three-fold representation from abstraction, to reality (book covers), to fiction (spam emails) did. This relationship spoke its own new narrative of the world today; in turn representing the cultural experiences of Heman Chong. It was his novel, (art) writing in progress. 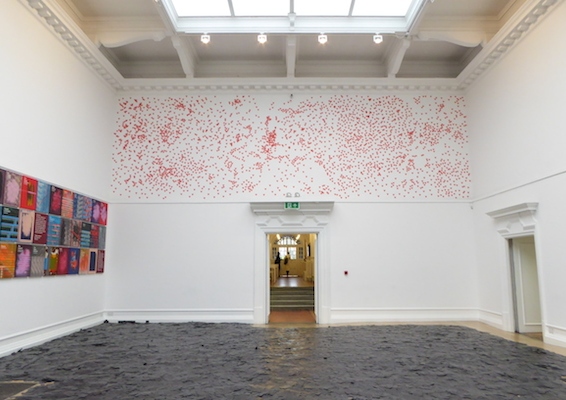 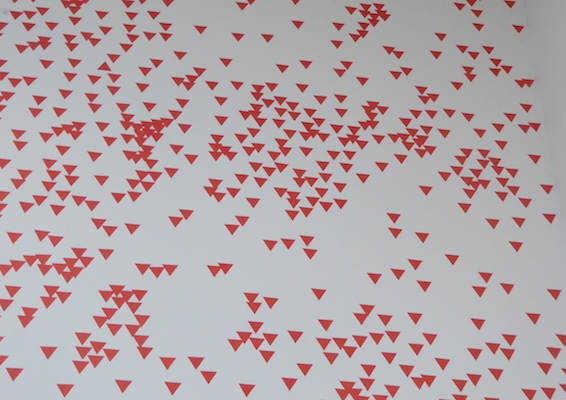 Red triangles hung in their hundreds and thousands on the wall above the entrance doorway to the gallery. Um…what were those red triangles for? They didn’t make sense to me. Entitled ‘Index (Down) from the series ‘Surfacing’ (2009), they were to be seen as the twelfth reiteration of the exhibition, an artwork to be imagined, defined and restricted by its architectural parameters. It was another reference to control, but who is controlling whom here?  Was Heman controlling me or the institution? Was the institution controlling Heman? Was I controlling it all by simply being in the exhibition space? I suddenly lost all sense of my place in translating art.

Heman Chong’s exhibition attempts to cut into your ways of seeing, translating and interpreting yet, it is viewed with such convention by the audience. Is it possible for the audience to acknowledge and understand different ways of reading art? Can they contest and question the systems and structures of the everyday institution and corporate system? Can an artist change the rituals and expectations of engagement? Can I not take that business card that is offered to me at the next art opening I attend? It is time to write a new juxtaposed narrative, just like Heman Chong – push the art system to write something new.

P.S. “Text as art” was so last century. This was typography at play. A novel in writing. 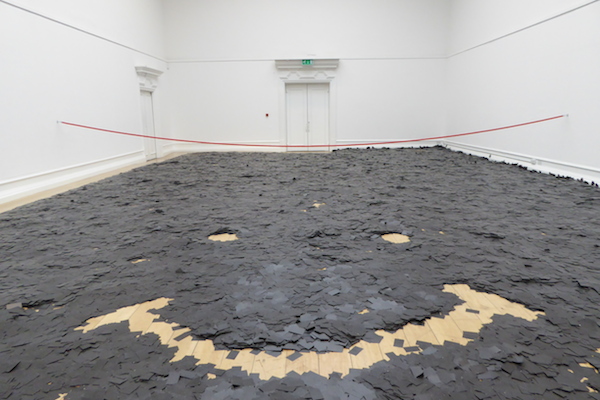 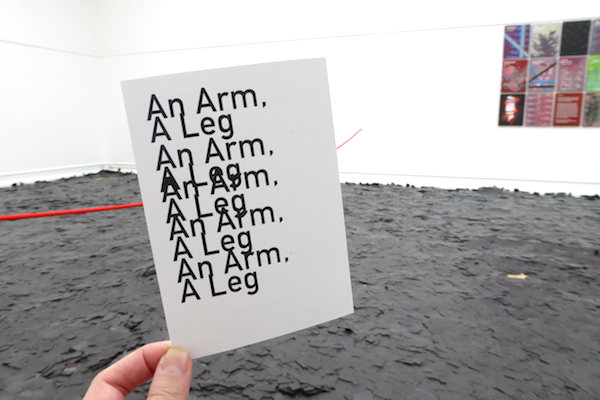