During my two-hour (still wasn’t long enough) catch up with friend and artist Morgan Wong in his studio, he said I should check out 100ft. PARK space at 220 Apliu St. seeing as I was heading in that direction for the opening of ‘Jungle of Desire’ by Wong Ping at Things That Can Happen (98 Apliu St). I hadn’t checked to see whether it was open or what was happening but thought there was nothing to lose by going…and you know me, I have to try to see as much as I can whilst I’m here.

As I negotiated my way through the packed Apliu St. flea market crowds, I found a sign for the space leading up to a stairway and what seemed like a residential highrise. As I buzzed the buzzer to be let in, I was followed in by a gentleman who I knew I’d met before…eventually finding out that he was David Clarke, academic and Professor of Modern and Contemporary Art from Hong Kong University who I’d interviewed during my PhD fieldwork research back in 2010. FIVE YEARS AGO. Time really does evaporate. We didn’t realise that we’d met before until we left gallery. Anyway, David and I went into the space to find that there was no exhibition on show, although the previous project was still installed. 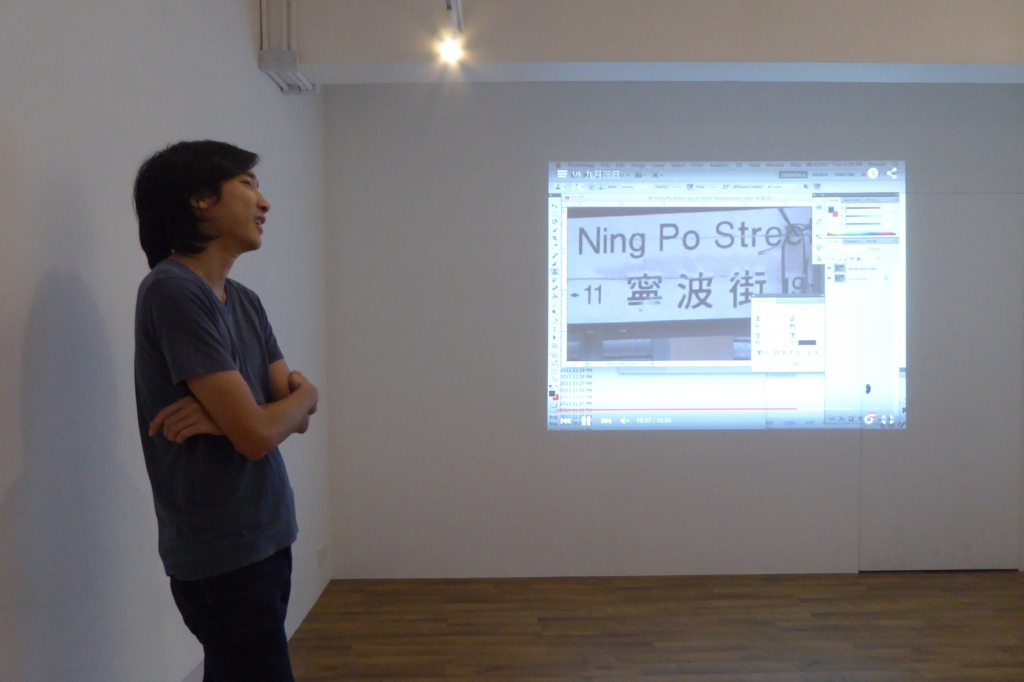 South Ho, co-founder of 100ft. PARK with Stanley Siu, talked David and I through the project – the outcomes of 100ft. PARK‘s first residency programme with Chinese artist, now living in Hong Kong, Ip Wai Lung. During the residency, the artist continued one of his ongoing projects, culminating in a performance on 3 September 2015 (when I was still in the UK about the fly) where he was observed “live” working on images of some of Hong Kong’s road signs through Adobe Photoshop. He was altering the Chinese text that sits under the English text on the road signs, changing it from traditional to simplified Chinese characters. The images, once altered, were uploaded to a Facebook folder on the artist’s own page, where they are shown below. The entire performance lasted just under half an hour.

It seems that not only is sex a recurrent theme as part of artists’ practice here (as you’ll see in Wong Ping’s exhibition review to follow), but also examinations of digital media, media representations and the use of social media as a curated space and exchange platform (as in Para Site’s latest exhibition too). Another key theme is that of re-examination of the world around us, the thing we negotiate and read on a daily basis…the textual or visual languages that are referential to our identity. In Ip Wai Lung’s case, how altering signs brings Hong Kong into focus, specifically its history and relationship to mainland China and also its relationship to it’s (British) past. Traditional Chinese characters literally present a traditional representation of that named place…is it not time to renegotiate this or as Ip Wai Lung does, re-appropriate this? More to the point, why are the signs not in Cantonese? (Any information welcome!)

Ip Wai Lung, born in Guangdong, now works and lives in Hong Kong. He started taking photographs in 2012 and then released his first works in 2013. In 2015, a trip to Tibet for meditation, and to explore his self-worth, inspired his first thoughts on being an artist. Using sexual innuendo, and through examination of daily life situations, his works explore personal repressed emotions and convey the bizarre distance between people and the city. His subjects include wrapped up motorbikes, sex addition and distorted mirror images. Original appearances of subjects and characters are altered so that their basic composition is totally destroyed to reveal new purposes and functions, as with the outcome of his residency at 100ft. PARK. Thanks to South for talking to us!