Every so I often I feed my love of ballet, my life (once) as a ballerina that I’ve spoken of many times before here on my blog, where last month, manaXi and I went to see ‘Tree of Codes: A contemporary ballet’ as part of the Manchester International Festival 2015 (MIF15).

Directed and choreography by Wayne McGregor, visual concept by  Olafur Eliasson and composition by  Jamie xx, it was a must see in the book of wordgirl. With brief information provided prior to the performance, you had no idea what you were going to see…only an expectation based on prior experience of the artists’ works…which was enough to make me buy two tickets…also as manaXi has a background in Performance Studies (he tends to keep this quiet), I was intrigued to see what he thought.

Some of the works I’ve seen before by Olafur Eliasson include ‘The Weather Project’ (2003) in Tate Modern’s Turbine Hall, London, and ‘Take your Time’ (2008) at PS1, New York. Both monumental in scale and immersive environments, they shift viewers perception referencing meditation and experience of place and self. I can remember lying underneath the 40ft in diameter mirror as it slowly rotated in PS1 for what seemed like hours, thinking about my nomadic existence as I was then living in New York, and who I really was…was this me?  Was this real? Somewhere I have photos, but as my hard drive got erased then re-discovered, the images are lost amongst a numbering system from 1-14,000. Maybe that’s how the photos are supposed to be…hidden in the ether.

‘Tree of Codes: A contemporary ballet’ as part of the Manchester International Festival 2015 (MIF15), was inspired by ‘Tree of Codes’ by Jonathan Safran Foer, a book carving re-appropriation of his favourite text ‘The Street of Crocodiles’ by Bruno Schulz. This is now feeding my book arts practice. Soloists and dancers from the Paris Opera Ballet and dancers from Company Wayne McGregor formed the company for the performance, with a site-specific environment created by Eliasson to a score composed by Jamie xx. This creative team worked together for over two years to make a contemporary ballet that responded to this beautifully intricate and distinct artwork…and it came through. 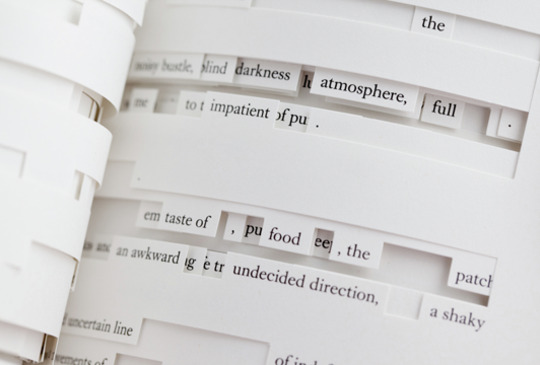 The performance was born from pitch darkness with small lights on the skin of the dancers’ clothing…a light dance that grew in clarity and brightness, leading to an eventual and overwhelming rainbow light immersion…to a space consumed by light. The dancers shifted and changed as a narrative progressed (but towards what conclusion?)…twisting, turning, and consuming every ounce of their energy, largely in female to male coupling, into a multi-layered performance reflecting the book’s staccato story of disjointed-reformed sentences and adhoc punctuation. I was unsure of where it was going, what was being said, and how it should be visually read. This sense of questioning and lack of clarity made you look, seek and try to find the conclusion, the meaning, the end of a potential story playing out in front of you…when in reality, it was a story of engagements, relationships, comings and goings, intensities and fluidities as with the book’s articulated, unordered (or reordered) words. There was to be no answer. Just experience.

The music by Jamie xx was atmospheric, electronic, meditative, in part repetitive playing against the somewhat disjointed nature of the performance, cosmically reaching to a transcendent crescendo unusual to other contemporary ballet soundtracks I’ve heard. In a word, distinct…you occasionally wondered whether you were at a gig or a ballet. I’m looking forward to buying this (if possible) and playing it at home through manaXi’s bass high sound system.

The set by Olafur Eliasson began with the emptiness of nothing, finishing with an everything of colour…a true Eliasson experience of light, diffraction and mirrors. It was constructed through the introduction of multiple layers in front of the audience…both reflective and transparent screens descended on to the stage to partition lines of movement, where these screens went from being static to twisting and turning circles, making the final scene into a room dominating, experiential, colourific, soundscape wonderland (quite a sentence but true). A hypnotic assault of the visual and aural senses…a comment and definition of today’s contemporary arts and culture… 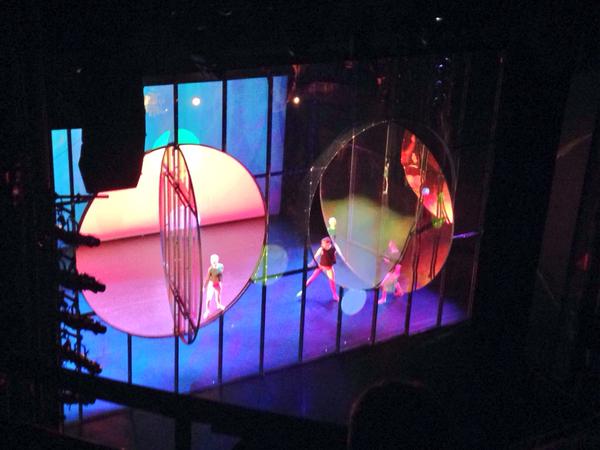