The end of another week, spent in another city, this time to Manchester to contribute to the second (out of five) research networking lab meetings for the AHRC funded project ‘Culture, Capital and Communication: Visualising Chinese Borders’ (CCC-VCB). Hosted at Castlefield Gallery, it followed on from the first research networking lab session in November 2014 at the Centre for Chinese Contemporary Art (CFCCA), where as a group, we contested what is art, what is “Chineseness” (that I recently discussed at a 3-day symposium in Lisbon), what is “Chinese art”, and what constitutes protest art.

CCC-VCB Lab 2 started (with sushi and sashimi) by looking at the “working terms” as part of the research, using them as a starting point, whilst questioning the recent Occupy Movement (Hong Kong) and civil liberties…whether they art in their own right. Beccy Kennedy stated that anything is art or design as long the artist says it is. Here, we are more interested in artists that are not attached to an institution – the self-defined artists, the notion of borders as a loose category and border studies as an academic phenomenon, and identity formations in Mainland China, Hong Kong and Taiwan and the differences in those regions.

Kwong Lee, Director of Castlefield Gallery introduced the afternoon saying his point of reference for the lab comes from being from Hong Kong, interested in border between Hong Kong, Mainland China and Taiwan, how art has a role in politics, in the role how people live, the role of art reflecting society. He reflected on his time of working with artists of Chinese descent/diaspora from Chinese Arts Centre many years ago, and at Castlefield Gallery in 2008 as part of Asia Triennial Manchester 2008, where the word and use of borders has been an issue citing a recent example ”Taiwan as a country” and the notion of political control, which in Manchester isn’t often come across this unless working with Greater China. He is interested in how practitioners deal with it, not interpretation practitioners…cultural studies as such. In the West, it is seen as political…a disconnection…it is about intention and perceived effect especially when politics is involved.

Ying Kwok, freelance curator (who used to work with Centre for Contemporary Chinese Art (CFCCA), Manchester) started the session stating that the research labs offer so much possibility where she wanted to just focus on Hong Kong. As a freelancer, it puts me in an interesting position…often away from Hong Kong. The bureaucratic side and the expectation when working in and with Hong Kong and how to deal with that, Hong Kong’s arts system, the different types of organisations, and what might be interesting or match work here in the UK for potential exchanges. Ying mentioned the projects Organhaus, Arrow Factory and Homeshop in China…the importance of supporting artists that don’t fit in the organisation or commercial gallery system…international exchange with limited resources.

Ying spoke of the Leisure and culture Services Department (LCSD) in Hong Kong supporting the work of 19 museums; Art Development Council (equivalent to Arts Council England); art promotion office; cultural development: West Kowloon Cultural District and M+; Experimental: artist-led space less than 10 people; Private foundation: with specific interest and agenda; commercial sector: commercial gallery where there are more than 200, art fairs such as Art Basel, Hotel Art, Affordable Art Fair, Art Central, and auction houses now the 3rd largest in art world since 2007. She discussed the understanding of the term “curator” in Hong Kong and how it is understood differently. She questioned whether Hong Kong is an arts-conscious city even though it is a leading art market in the world; the increasing number of non-commercial art spaces; the development of creative hubs supported by the government including PMQ-designer and makers zone. Ying stated that the general public are interested in art and see it as a recreational activity, where art is getting more media attention. She cited the piece ‘Rubber Duck’ by Florentijn Hofman (shown below) part of Mobile M+ in 2013 questioning whether these pieces make art look like a theme park where interpretation is lacking. We need make a bridge between art and the public as to how to interpret art, and educate others and they don’t often view art in the right way.

Since the Umbrella Movement, political sensitivity and boundaries have moved slightly. She cited the piece ‘The Reality of Pixel’ by Otto Li (shown below), eliminated from a touring exhibition between Hong Kong, Macau, Taiwan and Shenzhen…turning factual information in a visual sculpture, seen as being sensitive, it was removed from the show. Still shocked about this censorship issue in Hong Kong.

Ying went on to discuss what is missing in the art system is the importance of the art critique citing her work through the ‘Collectors Club’ that allow the public to get involved with their work and the projects they create, and the ‘Art Appraisal Club’ founded by Ying to initiate critical thinking and initiate effective discussions. Hong Kong has no professional art magazines…there is the art map Hong Kong and The Stand News…serious art writing cannot find a platform, art writers are not paid or acknowledged in the way they should. Without this art criticism and art support it is questioned how far contemporary art can go in Hong Kong.

Paul Gladston questioned why are localised boundaries so important to this platform? Why don’t other titles such as Journal of Contemporary Chinese Art (JCCA) from England and titles from China count? It is a virtual world, I’m so convinced these spatial boundaries are so important. They become paradoxical in terms of critical space as a platform. National ownership is paradoxical to the art critique. If you don’t have enough local people having that critique and context, how can you move forward? Localised responses…do they exist within a privileging that they are the only place that art criticism can take place. It is about acknowledging art writing coming from Hong Kong. Nothing wrong with localised platforms, and different modes of writing. Essentially there is value of a local platform…it is problematised by a wider, transnationalised, discursive platform. The argument of privileging versus lacking local knowledge.

I followed Ying, giving a quick five-minute soundbyte talking of the rise of the art gallery and museum in China (that I recently presented at the ‘Ahead of the Curve’ symposium last week), spouting statistics against the issues, problematics and confused understandings of the current field, then presenting a handful of books that I’ve recently been reading (shown below). 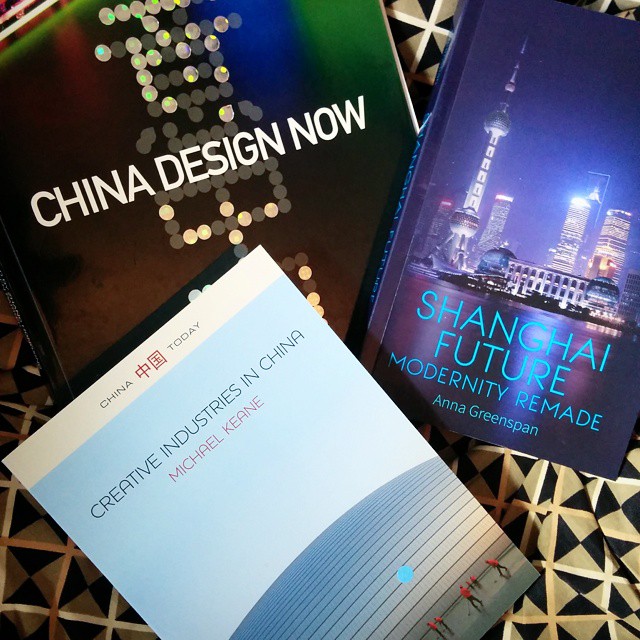 Jen Wu spoke of her 10-week residency at Taipei Contemporary Art Center in Taipei, Taiwan in 2014 and her examinations of the ideological structures and forms as to why the Sunflower Movement happened, issues of identity and the influence on cultural production in Taiwan. She mentioned outcomes of the ‘Socially Engaged Art Talks IV’ series at the center raising questions around protest movements and how they changes what you do as an artist.

Do we live in a protest resistance culture? Jen went onto to speak of DIY culture in Taiwan…and how students do not go and create projects/interventions in the city. She cited the two-day symposium called ‘Movement’, the group “The Untouchables” Liberation Taiwan whose spiritual home is the Halfway Cafe. The difference between the Sunflower Protest and other protests that preceded it in terms of “revolution” meaning something different in today’s mediatised culture and a nation of non-violence – is that the appropriate response? She finished on showing video documentation from a ‘political rave’ that took place in Taipei, used as a response to/reminder of the Sunflower Protest.

Paul Gladston questioned to what evidence does this work creates social effect? It performs the process of socially-engaged art without any evidence that it has a social effect. What’s the impact? It is instrumentalising…directing from here to there…does this mean it becomes a solipsistic activity? Jen spoke of the nature of “true resistance”. Are these projects therapeutic or do they have impact? How do we judge its impact? Are we judging it as an “end” or as a “process”? Do we need to come up with an answer or is it about creating platforms? What is the nature/judgement/assessment of the impact? You need to be clear of what your goals are…you cannot make empty gestures. Is it for ones self to determine this? All socially-engaged art has some kind of impact…how do you measure this social impact?

Artist Yu-Chen Wang (who is currently doing a residency at MOSI, Manchester) followed Jen speaking of the Treasure Hill Artists Village in Taipei Artist Village, Taiwan, and her work ‘This is the end…’ (2014) as part of the Taipei Biennial 2014 responding to the theme of ‘The Great Acceleration: Art in the Age of the Anthropocene’. She was thinking of how she began her journey in life in Taiwan, returning after 14 years in the UK, questioning is there a new world, a new beginning, the end, is everything is collapsing? The curator of the biennial wanted to interpret her work as sound…as various notes, if put together as a piece of music, each note engaging with each other. This work is a fictional text questioning who she is and where she comes from…a projection into the future, what our future world will be like with the potential of a bright future that we don’t always see. She was interested in how to deliver a message to the general public where it was in two languages, not a translation, operating in two different domains…two different personal messages…two different experiences of her life. 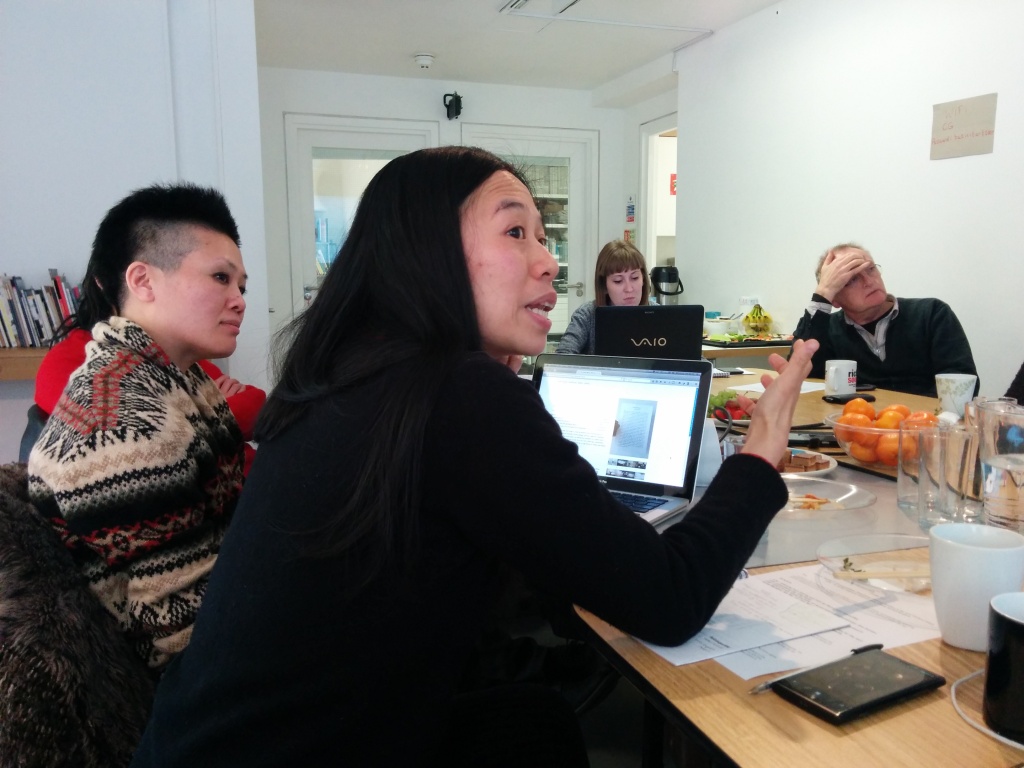 Zoe Dunbar, the new Director of CFCCA in Manchester, spoke of her first and recent trip to China and Hong Kong…from architecture to gallery infrastructures, art spaces, projects, residencies and funding. We need to not underestimate the power of sponsors and sponsorship for the institutions in China.

The session continued with a short active research and discussion groups – breakout sessions – where we were asked in three separate groups what are the differences between the production, display and distribution of art in mainland China, Hong Kong and Taiwan in terms of: 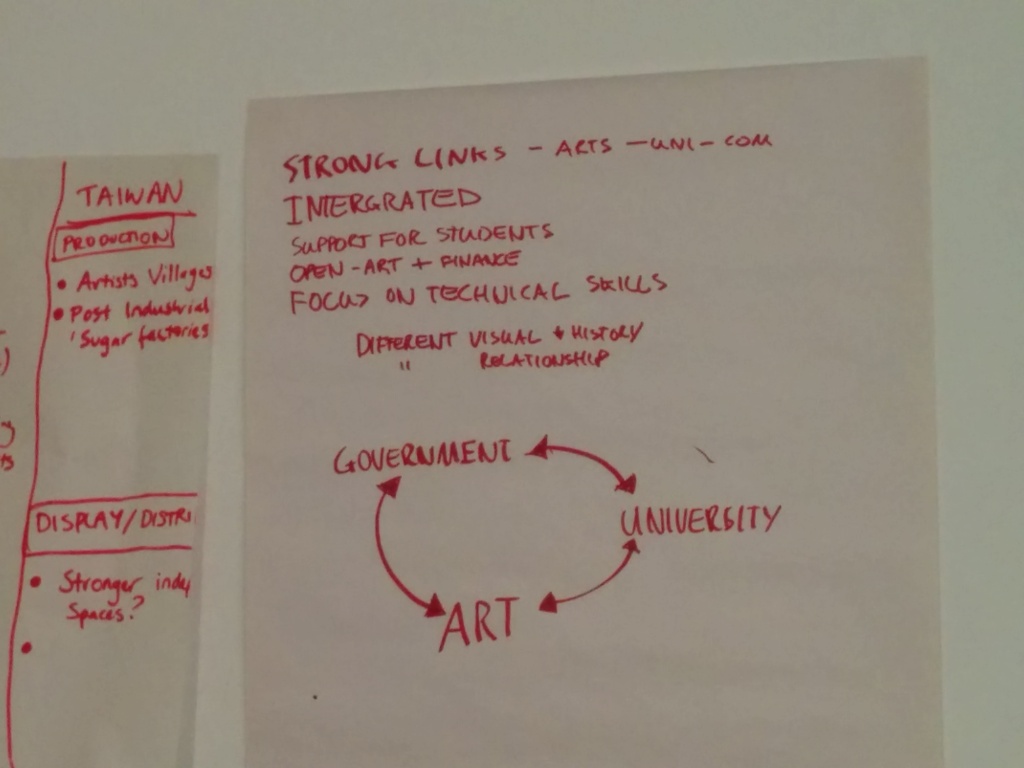 The session ended a little abruptly after this exercise as some of us had to attend a leaving party for one of CFCCA’s most dedicated interns who is going to be very missed. (Good luck with your next adventures Denise!).

The next research networking labs for CCC-VCB will take place in Hong Kong and Taiwan in September 2015 and I am lucky enough to be funded to go! Can’t wait to return to Asia (twice in one year is a privilege) and to go to Taiwan for the first time. Any recommendations, send them to me…in the meantime, more reports from wordgirl to come…