During my daytime gallery hopping, from location to location, show to show, across Hong Kong near and far (sometimes too far)…one show, for me, was a definite “must see” due to my current research interests in the art of, and from, Occupy Movements, including their legacy and re-representation, specifically Hong Kong’s Umbrella Movement, Umbrella Revolution, of late last year. As you know, I have often provided visual insight into its development and documentation on my blog here alongside more formal pieces of writing including ‘Hong Kong’s Visual Politics – A city observation or global “agitprop”?’ from the recent Transnational Dialogues publication, and an online interview with artist Ye Yun regarding her “Wishing Knots” project for Hong Kong’s future…so I couldn’t wait to see this show…

‘Art of Protest: Resisting Against Absurdity’ is by Hong Kong artist Kacey Wong on show at the Amelia Johnson Contemporary (AJC) Gallery. As timing goes, when I went to the gallery, Kacey was there giving a talk to his current interior and exhibition design students, and to a journalist from SCMP too, so I discreetly joined the group and was lucky enough to get a first-hand insight into his practice and his experiences of the protest. So here are Kacey’s thoughts from his “pink political dystopia” as I’ve called it… 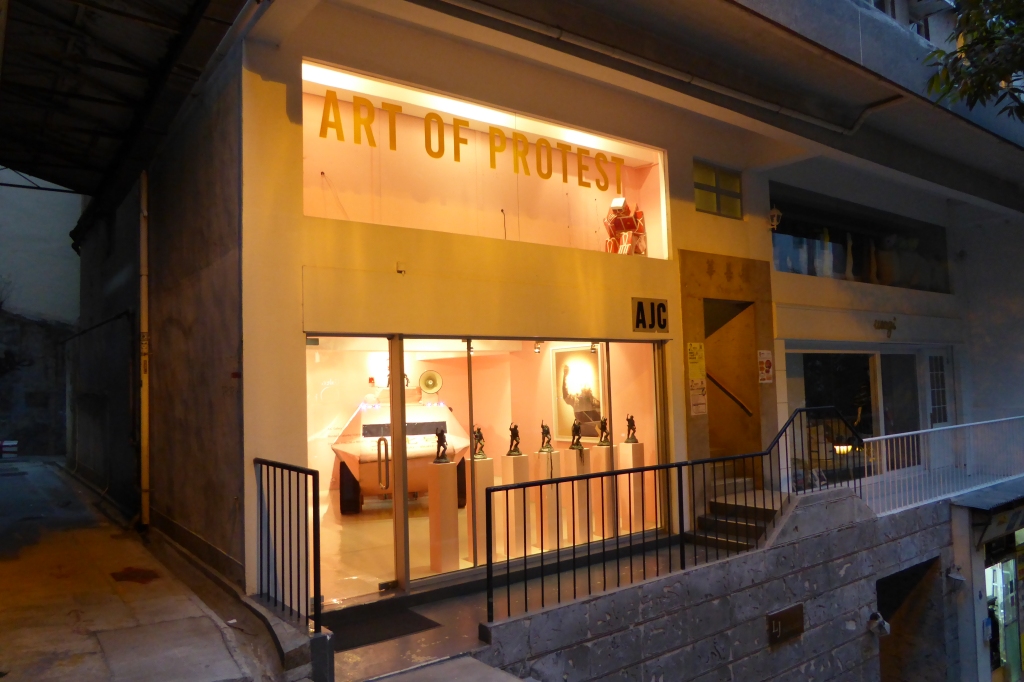 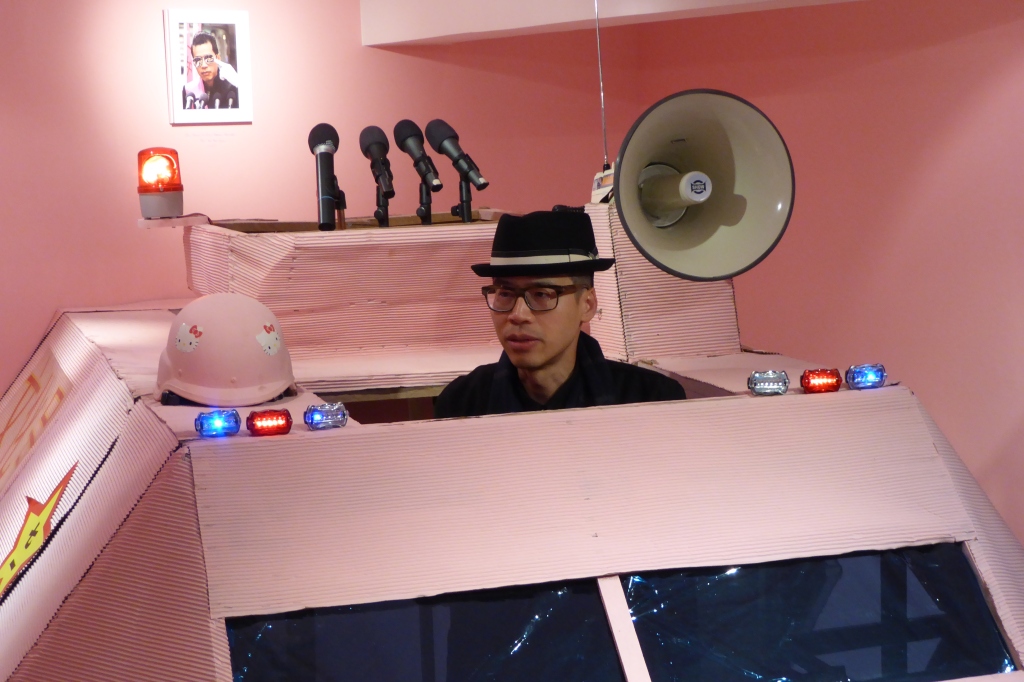 ‘Art of Protest’ is a collection of works since 2011, instigated since the Ai Weiwei protest, which to Kacey signified a political weakening of China. It is full of his wit, humour and sarcasm showing personal enquiries into practice around political issues, his projects that have taken to the streets as a form of demonstration…’installations, videos and images portraying his role in initiating, engaging and collaborating with the public in order to generate momentum in social discourse’. Kacey considers the political climate in Hong Kong a phenomenon of “absurdity”, a contradiction between the desire for freedom from unreasonable authority on the one hand and passive resistance or acceptance of the other. ‘I want to end universal suffrage. The show portrays as a concept the alternative-real, Hong Kong’s black politics.’

“Whatever you think, think the opposite.” – Kacey Wong

Kacey was questioned about the exhibition’s relationship to Art Basel Hong Kong stating he and the world need an awareness of what different platforms are about, who they are for, especially when working with commercial galleries. This show is within a commercial space, the AJC Gallery, therefore I am channelling all the funding to something I believe in.’

The candle works reflect the most recent violence of the police, the brutality of the police that’s new to Hong Kong that we are not used to. The TV screen series of installations on the first floor are a multi-faceted commentary of how people are willing to be manipulated by the media…the older generation are nosey but not been there or been there in a different era. It is different reality that is not well-informed creating a generation gap called in the protest the blue ribbon people. This can be said about different countries including China and North Korea and also regarding censorship…censorship of freedom. The police and force of police, the dangers, imprisoning us…politics are complex.

KW: The walls of the gallery and the tank are not pink but red. Pink is red with white. It is about selling communism in Hong Kong as the older generation escaped from China to HK. A knowing of what the real evil of communism is about which they don’t talk about it here. It’s “nicer”…there’s an absurdity to it. The government here don’t work for the people of Hong Kong and have created a bad form of communism, which apparently works…it’s own utopia…whereas in China it is not like this. It is about greed and corruption and how to encourage this.

Q: How do you see the use of art in political movements, as a symbolic form or a way of expression…is there a democracy of art? Art by the general public not by the artists.

KW: I see it all starting in 2013, all eyes on Umbrella Movement though it was far before that. Traditionally in protests, people make banners and posters. Technology has made this process easier…it is not an invention, it’s always there. I have a duality of being a citizen and artist…I have an artistic standard, like writing my own brief, and my own theory of five points:

It is through the public usage of art that people get to express themselves and criticise the government. From 2013 to the Umbrella Movement, it has been a time for trial for people of Hong Kong. The first of 1 July protests since the 1997 handover was a time of a symphony of complaints. The power of the Umbrella Movement came from the sudden release of public space, subverting use of roads to create a new use of space for art. Three months after…on the one hand we can see the power, such as the umbrella man sculptures, umbrellas used to protect from pepper gas used to create a canvas, the Lennon wall…on the other hand we see the weakness of the art as it is not an art festival but referencing true universal suffrage – we don’t have democracy, but we have to pretend that we do. The spirit of putting up a good fight is the priority where art is the vehicle…it is the strength versus the weakness of art. It is not the main aim but a means to an end. It’s not performance art, its political struggle.

Q: When you planned this exhibition was it hard to find a commercial gallery?

KW: AJC Gallery approached me in May 2014 prior to the Umbrella Movement. I originally wanted to do a political show from my work regarding an Island from Japan, then the Umbrella Movement happened causing my whole traditional art activity to stop as my energy went into the movement. The show had to reflect part of that as the struggle is still happening. I doubt we can resolve this in my lifetime. In terms of the gallery, self-censorship is getting more and more in Hong Kong. I’m glad I’ve had full support. In terms if how it relates to Art Basel its perfect timing.

The impossibility of the Umbrella Movement…when the world looks at it they expect violence…when Hong Kong does it, it was highly civilised, organised and art. I question is this a protest? The civilised way still doesn’t work as we are not dealing with a civilised regime. It is a continuous struggle that will continue to transform into other movements. Having this exhibition at this time is important. It is for the internationals interested in what happens outside the “fun fairs” as it shows a different side of art. The function of art in relation to a civilisation is art of the people, that’s their story and that’s what I’m offering in this show – the story of the Hong Kong people. A lot of artists here are concerned about their society and vision, traditionally part of their central focus apart from something abstract. I’m not saying all artists should engage in this political ground.

Q: What is your understanding of the word democracy?

KW: There is high quality and low quality democracy.During the Umbrella Movement everyone going through this understanding of democracy there is even a “Mobile democracy classroom”. We don’t have democracy so we have to pretend – it’s an awakening…here I’ll quote the back of my book.

We are all learning. The three months of the Umbrella Movement were “the democracy streets”. Never be superstitious of/happy with any system…anyone can be the leader. Concentrate more on the morality that the system.

Q: Can you talk about how you curated the show?

KW: It is looking at the inside/outside relationship of the space where the tank is the trophy piece to dominate the space with the candles lining the window to attract people in. Upstairs is a reversal of what’s downstairs. The main concept isn’t the machine, it’s home, coziness, darkness…that’s what upstairs is about…darkness through violence where the finale is at the end of the landing. The exhibition has been curated with a spatial rhythm…big narrow big…where you conclude by sitting down, falling into an architectural trap through being forced to watch TV, where the peripheral becomes masked a metaphor for falling into a jail…a metaphor for HK. I’m trying to gather the crowd and get them to move and negotiate the space in a certain way…getting the viewers to experience the work through spatial movement poisoned by pink. Poisoned candy with sugar candy…to show my absurdity and sarcasm.

KW: I was so naive back then…how can nothing happen? I was expecting a kind of Hollywood communism. Today it is welcome to the new 1997…where after 1997 it will be the 1984. I’m used to the violence…but I worry about you guys. 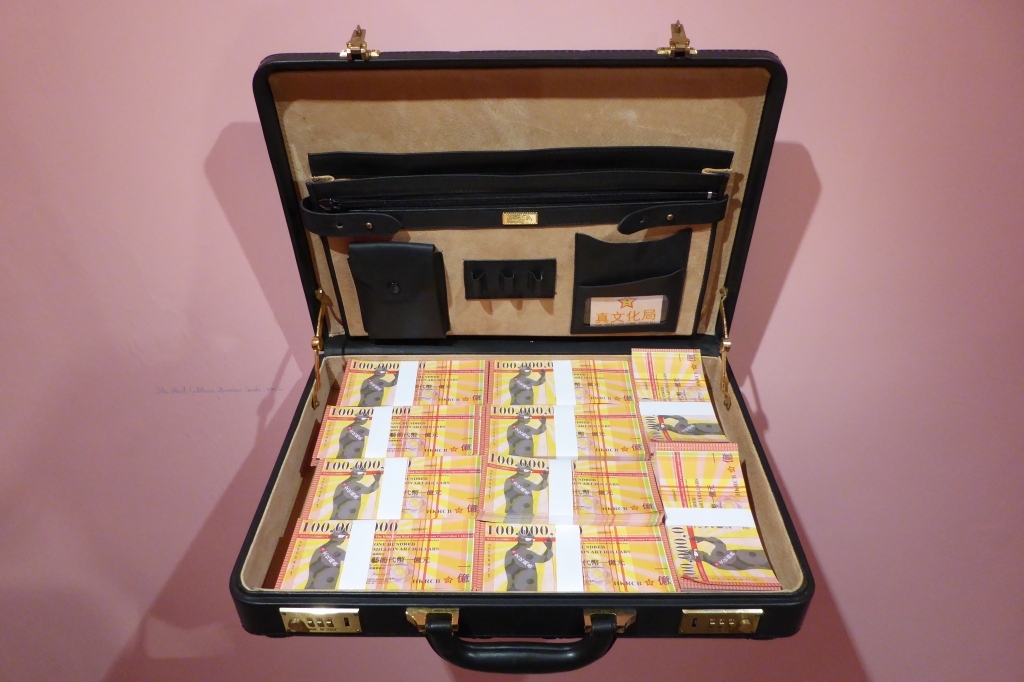 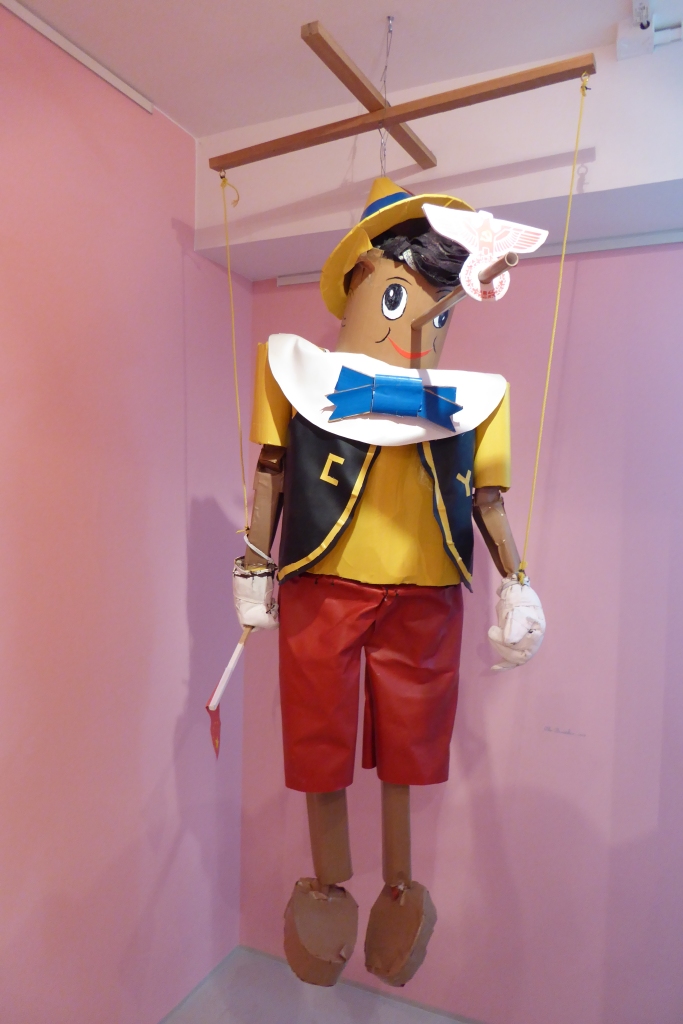 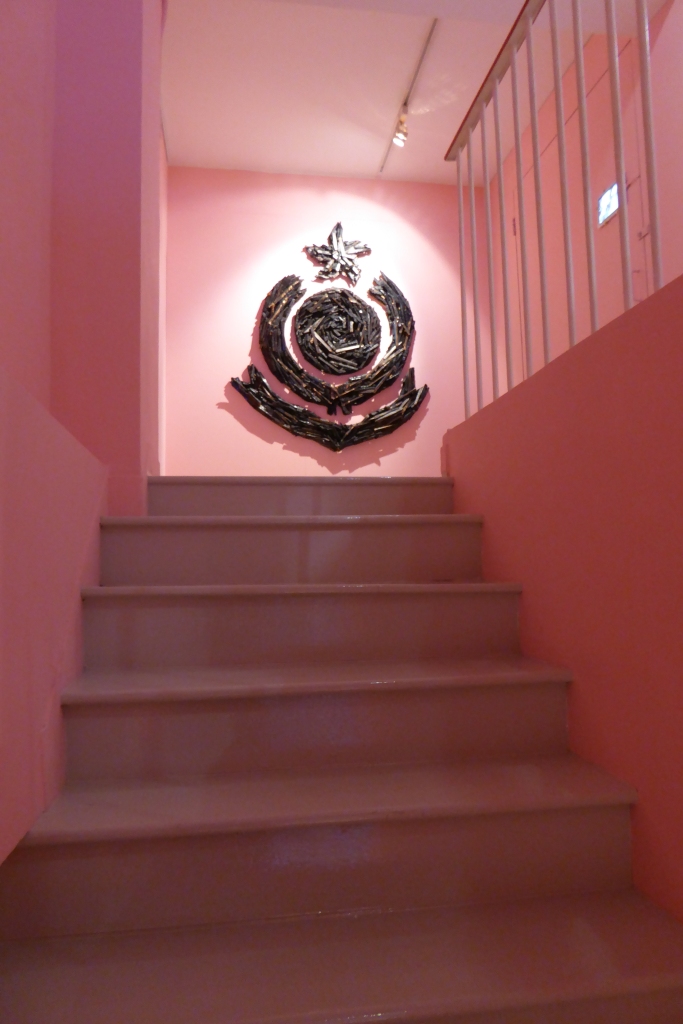 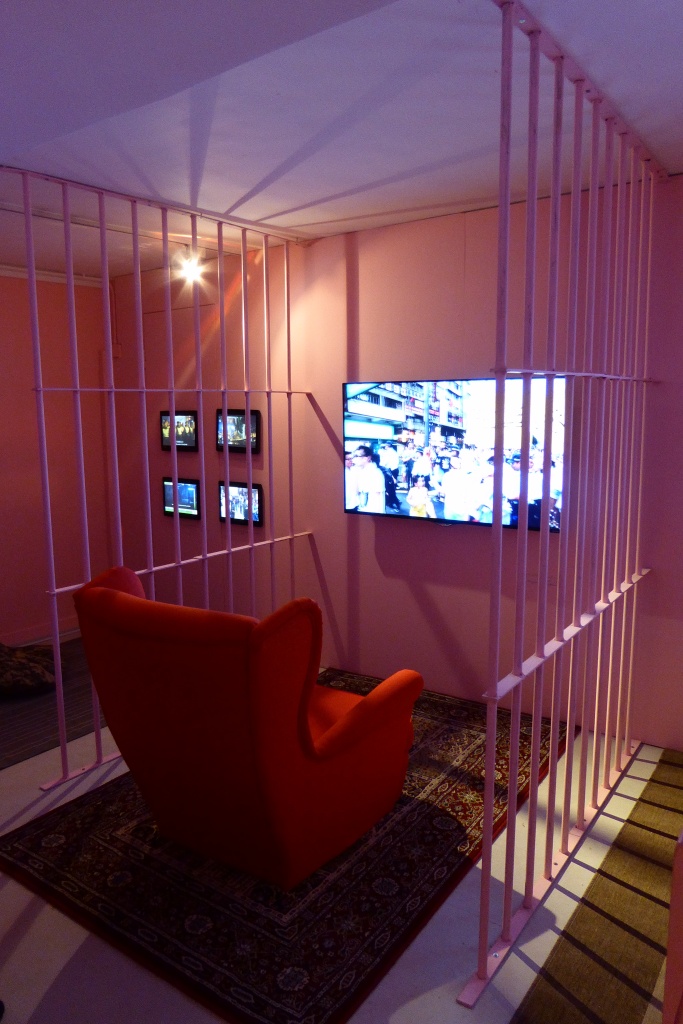 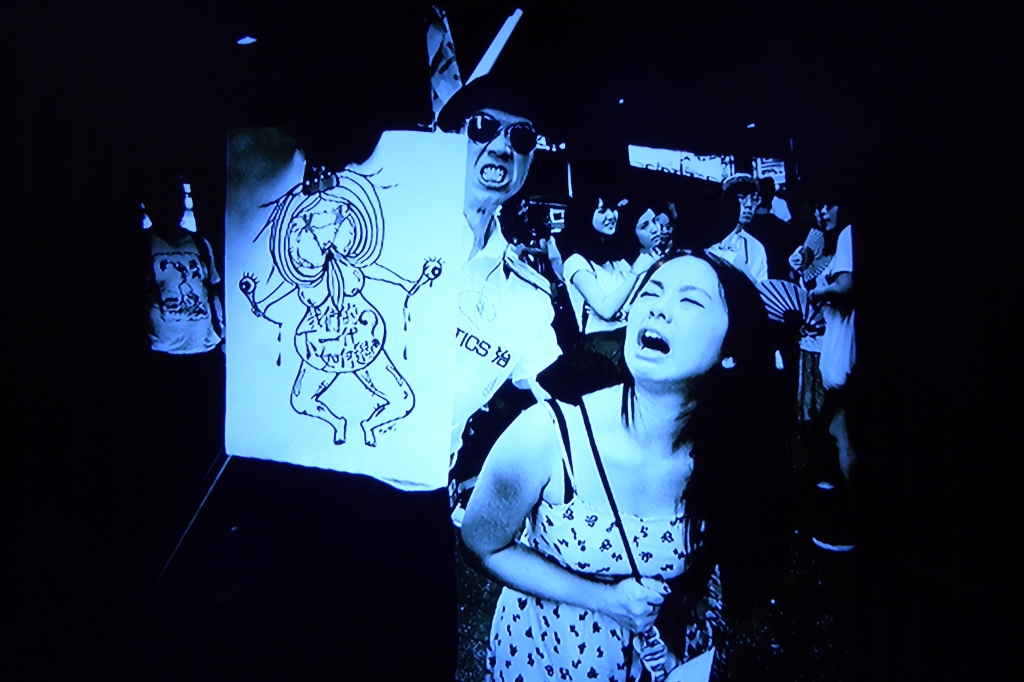