During a three-day jaunt to London at the end of January with the normal want to see and do as much as possible, manaXi and I went to see Christian Marclay’s solo exhibition currently on show at White Cube, Bermondsey including a performance by saxophonist/composer/experimental musician Laurent Estoppey. On this lazy Saturday morning, we wandered south from Bloomsbury where we were staying, across the river through the light drizzle rain, to be greeted at the entrance by some of my friends and familiar faces who now worked at White Cube.

Pub Crawl (2014) lined the main corridor of the gallery, a new installation where the artist has recorded sound from empty glasses and bottles that he found abandoned on the streets of East London during an early morning walk. The series of projections run the length of the gallery where as you walk further and further into the space, the sounds of the discarded vessels get louder and louder…rolling, crushing, breaking, bouncing against and off the concrete…a parallel to the sound of footsteps and cars. Here, Marclay considers sound exploration as a way of composing a score, a street melody of what I call “found sound” encouraging different ways of seeing. When you look to the floor you usually expect a certain resonance…a certain scene and view. Marclay makes us review our foot’s engagement with the floor…the sound it creates…whilst making us look below instead of ahead or up high. A different melody of the streets, an aftermath of the night before.

Surround Sounds (2015), a new visual-digital installation by Marclay, continues a relationship between image and sound, this time a collated lexicon of the sound effects made by characters in superhero comics – to me a next level onomatopoeic work. The scanned swatches taken from graphic novels are animated and choreographed to suggest the acoustic properties of each word. From Shhhh to Mmmmmmm…KKKkkkkk to Pop…boom to whooshhhh…you see the sound, moving sound, silent sound as there remains no audio. The words dance on the walls at speed into a visual language of freedom, when it usually is static on the comic page. It’s educational infrastructure references the paradox of silent sound through a visual, non-verbal language…therefore, it works as a new type of language education. This strand of research is further examined within his paintings overlaid with screenprints, which I see as static silent sounds representing a fragment in time, gesturing the eras of Abstract Expressionism and Pop Art. These works immediately remind me of the visual, digital language installations and video pieces of Tsang Kin-Wah. 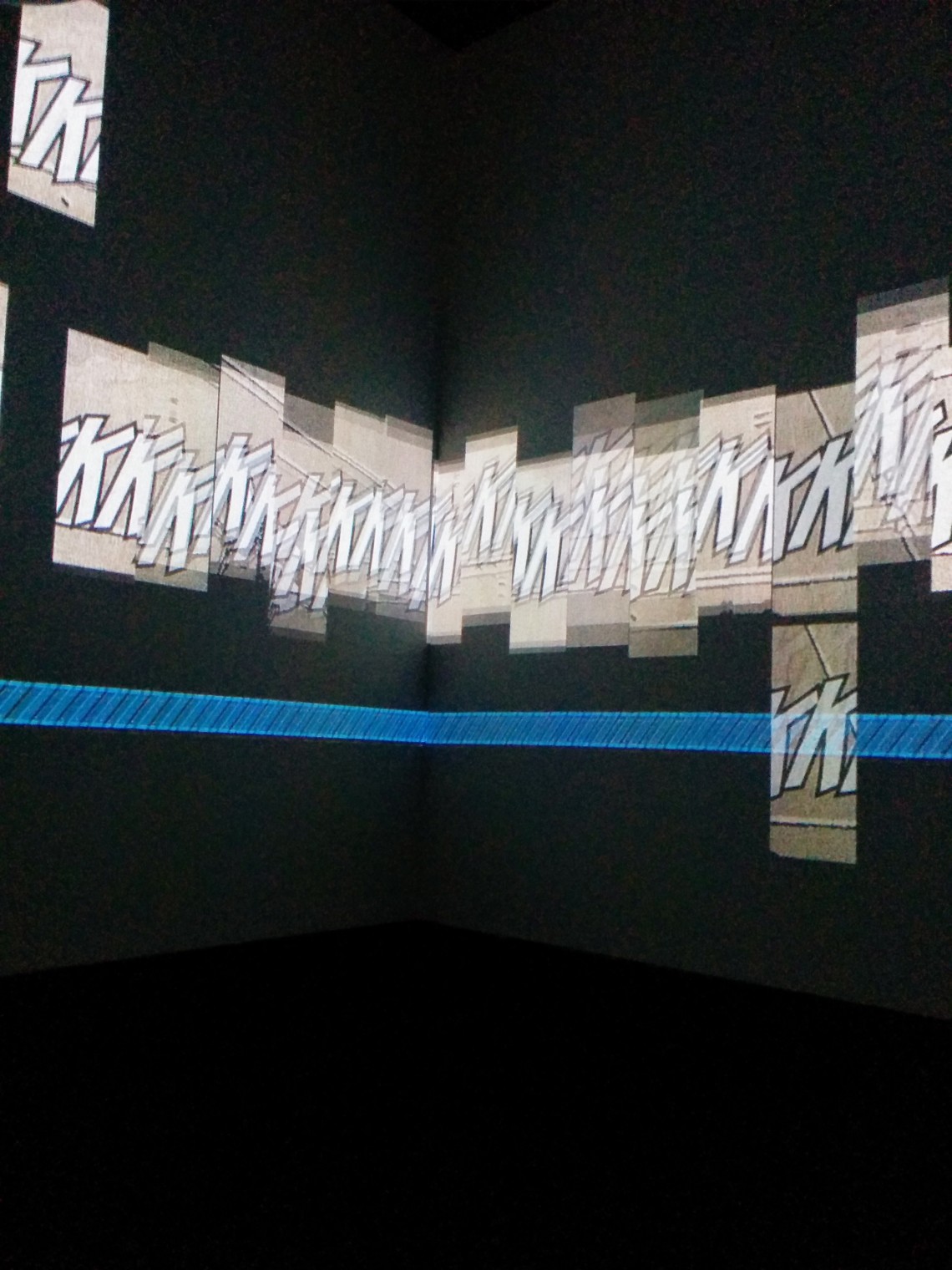 Throughout the exhibition and each weekend, are a series of curated performances led by London Sinfonietta and Marclay. The performances are recorded in situ then, with the help of The Vinyl Factory, a shipping container installed for the duration of the exhibition in one of White Cube’s gallery spaces, audiences are able to see the unique process of producing vinyl records – in-house production. From recording, to cutting, to pressing and to the printing of the sleeves (by Coriander Studio), this production studio feeds the main exhibition by showing the reality of creative commercialism from all angles (as the White Cube itself represents commercialism in a high art world sense). All week, every week this collaborative process will take place where the vinyl will be on sale through The Vinyl Factory website.

manaXi and I attended the performance by Laurent Estoppey, which took place at 12pm on Saturday 31 January. In South Gallery II (Room 2), the space was lined with a waist height shelves full of differently branded beer glasses, a vinyl cutting station in the rear corner and a handful of instruments. Not knowing much about Laurent‘s work, I didn’t know what to expect. He began by using a pint glass as a mute in his saxophone where you could hear a specific resonance through the microphone. It seemed as though he was responding to previously recorded sounds viewed on his laptop, as if a visual sound score. His cyclical non-stop breathing, reed-less airplay, puckering tongue rhythm to reverberation, against the roof and base of his mouth created piercing heightened tones like a boiling kettle at its peak – crescendo edges – to written scores of abstract melodies and soft momentary sound breaths. Glass cylinders were rolled clearly on the polished concrete floor adding another aural layer. In the background you could hear the street soundtrack of Pub Crawl (2014). It was a sound story-time. From his saxophone performance, Laurent went onto to play the glasses that lined the South Gallery II walls, sampling and looping them as he went chronologically round the room, sounding out like church bells. In the final part of the performance, he moved toward the vinyl cutter, to where the cycle of sound finished and yet begins when it is pressed, printed and sold to audiences.

This exhibition when standing alone without its performative streak is simple in its aural and visual landscape…what you see and hear is well, what you get – surface interactions and examinations of the tensions between sound and language, how we talk about sound and language, how we interact with sound and language and ultimately, their paradoxical value through the presence of an in-house site of “art” production. Through curating events,curating the real and ephemeral sound and language experience, the White Cube has started to deconstruct the themes Marclay presents, delving deeper through collaborative exchange with other artists, creatives and of course, audiences…new, establish, old and young…where it was something special to see children engaging with the mystery of Marclay and Laurent that day.

Further information on the show and a video showreel from Week 1 of the exhibition including Laurent Estoppey’s performance can be seen here.  On show until 12 April 2015. 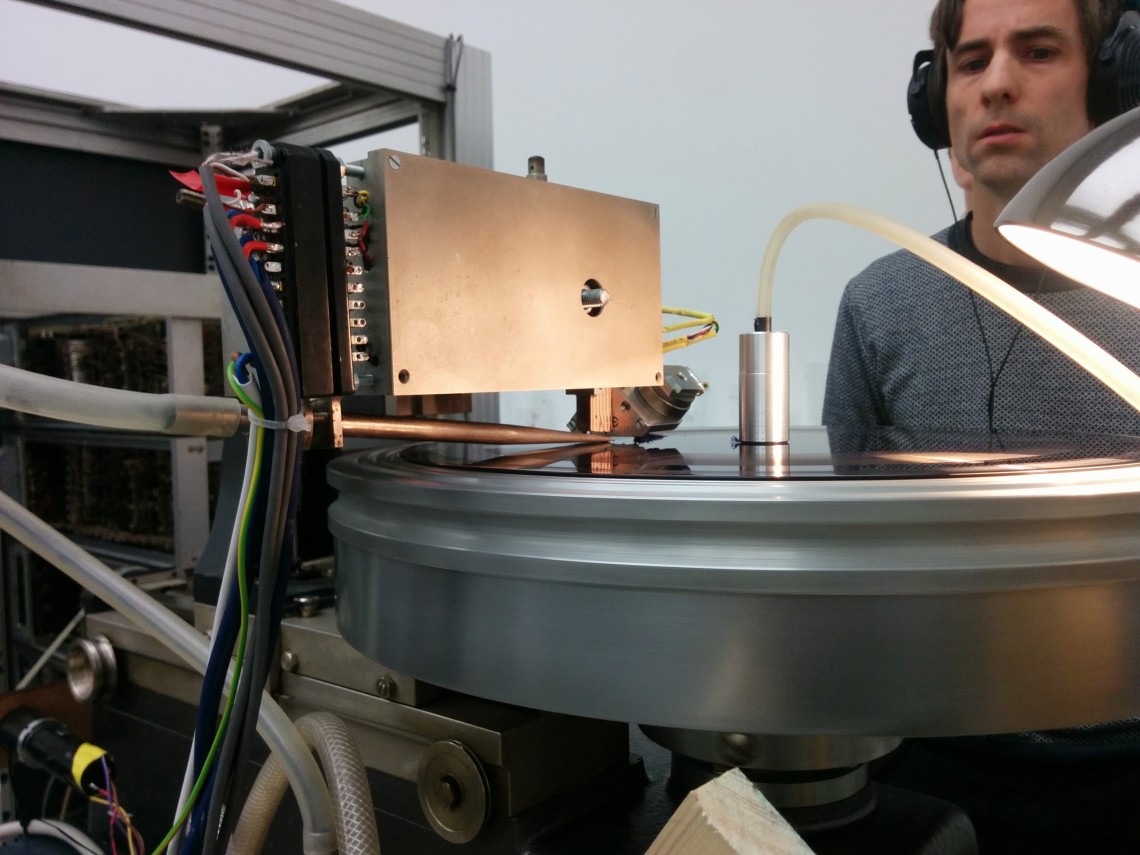