Following on from the self-publishing workshop I recently facilitated with the Part B Fine Art students at Loughborough University School of the Arts, I was invited by Andrew Hewitt from the University of Northampton to do a similar session with their second year Fine Art students…what was also my last teaching day of 2014. Under the title of ‘Self-publishing from Print to Online: The Promotion of the Artist and Creative’, I had five hours to work with the students throughout the day where I broke down the session into six parts, much like the workshop in Loughborough, as outlined below:

For the entire workshop session and day, I had 7 students (thanks to those who came!), where other students would periodically pop in and out. It would have been great to have more students but the smaller group allowed me to engage with them on a more 1:1 basis and for longer, also developing their group projects more personally related to their current professional practice module and forthcoming Spring Show. I was just pleased to engage as many of them as possible. Many of the students were familiar with my practice and I as I had given a lecture to the full second year Fine Art year group back in October 2014. This, in part, made things a little more relaxed and calmer as a starting point. The students had also recently been given an introductory workshop to bookbinding and bookmaking with Catriona Leahy from the department…so they all had real, first-hand knowledge and skills fresh in their mind. Great to finally meet Catriona too after all the to-ing and fro-ing with emails and introductions.

After this short exercise, the second part of the session was to introduce self-publishing through a lecture and material I’d brought along and laid out across tables for students to peruse, leaf through, smell (as print smells great) and gain inspiration from…this included my own artist’s books and self-publishing including from the recent ‘The Temporary: 01′ project; books by creatives Mengxi Zhang, Xiaoxiao Xu, Xu Bing, Hans Ulrich Obrist, Céline Condorelli, Mikko Kuorinki, Liz Hingley, Fiona Banner; examples from self-publishers including Pam Flett Press, The Caseroom Press and Rope Press, and publications produced as project outcomes such as Where you going?, Transnational Dialogues, Book Art Object…and so many more as you can see. I felt it was very important to bring a reality of self-publishing to the session so students could get a tangible idea of what is out there. These books moved from the lecture room to print room as the day and group project progressed, where printmaking and fine art staff became engaged in the works on show too. Great to see so many reading, looking, holding, examining the pages, texts, images, content… 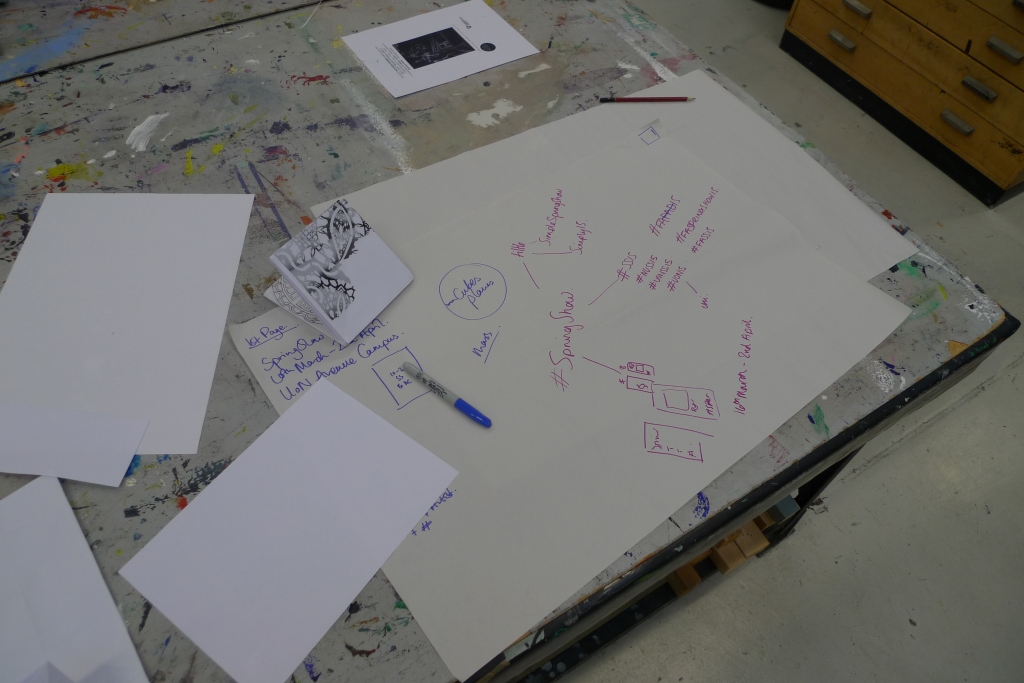 Parts three and four of the session took part in the Fine Art block’s printmaking studio…a place where I feel very at home. They have a world of resources there, which I reminded the students they might not have again in the near future, so to use it as much as they can! Here, they developed in small groups, a short illustrated proposal of a form of self-publishing/self-publishing platform, relevant to their fine art practice. They both chose to create proposals that related to current work-in-progress…their professional practice module, specifically the construct of a creative CV, and their forthcoming Spring Show taking place in early 2015. During the feedback session, the two groups discussed their proposed projects :

I look forward to seeing whether they put the proposals into use in the coming months…well I’ll see when I go and visit their Spring Show. Until then…there’s Christmas to keep me busy, and finishing my PhD…back to it… 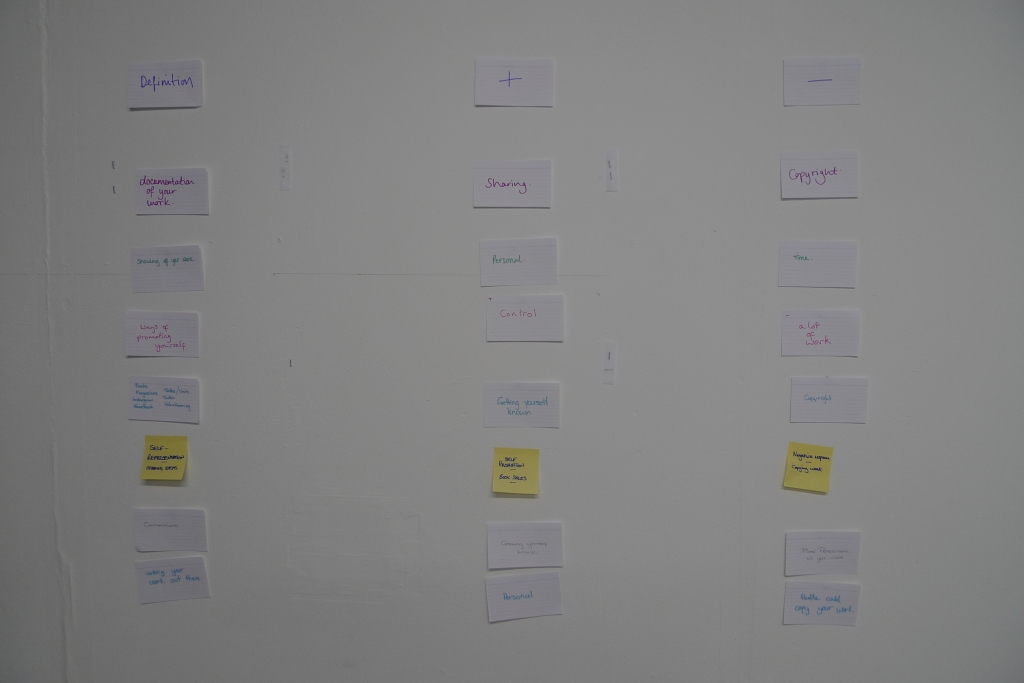 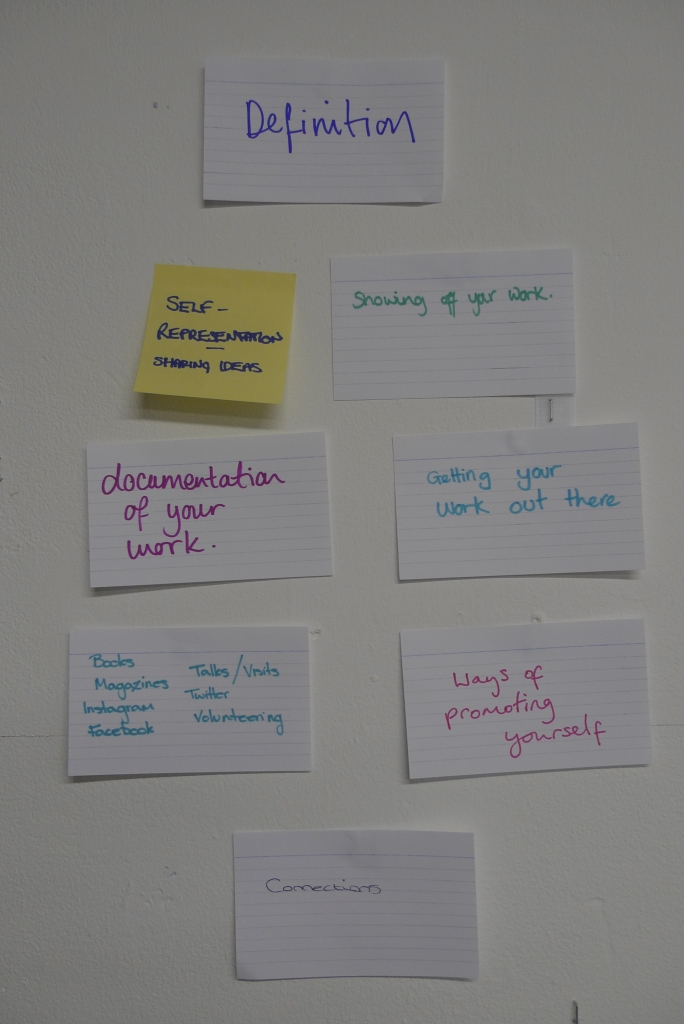 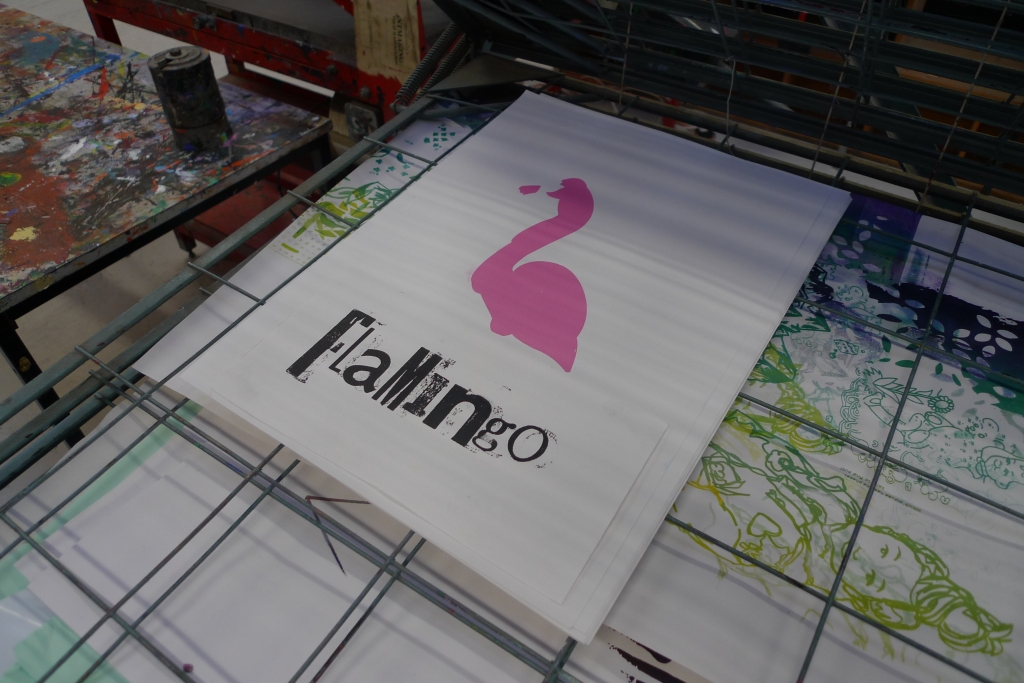