Before going into University today – yes, I’m back to it, back to many words, determined to see the end of PhD kingdom by the beginning of 2015 at the latest. Even four days in the research office this week! – I went to the Ikon Gallery in Birmingham to see their latest exhibition, and first solo UK exhibition, of female Korean artist Lee Bul. I initially came across her work back in 1998 when she was nominated for the Solomon R. Guggenheim Museum Hugo Boss Prize, funnily enough she was up against Chinese artist Huang Yong Ping (I’m wondering now if this is where my interest in East Asian art started to develop(?)…food for thought). An immediate thought as I first viewed the works at the Ikon Gallery were that they reminded me of sculptures by the British artist and designer Gerry Judah, examples shown below. I worked on his solo exhibition ‘COUNTRY’ in 2009 during my days at Wolverhampton Art Gallery. As you can see there is a clear affinity with Lee Bul’s practice in terms of a cityscape and landscape mapping through miniaturised models and building constructions…specifically in relation to her piece ‘Mon grand récit: Weeping into stones…’ (2005) shown in images 4, 6 and 7…they are also both laced with a politicised undercurrent.

The first floor gallery spaces are very much curated in the White Cube minimalist format. Large-scale sculptural forms, conceptual architectural models and maquettes, and 2-D drawings and paintings were sensitively installed with enough space to breathe – these politicised “utopian visions” are multi-dimensional in context and in material so they desperately needed this space to be negotiated and investigated. Very randomly as I was wandering through the space, another visitor was humming quite loudly the Darth Vader’s anthem from the Star Wars films…which, in some strange way, made you look at the works differently, as if they were space stations, interplanetary, galactic constructed kingdoms, the things that we create and imagine in sci-fi dreams or see in movies. It made me smile and wonder what the guy was thinking about the works. I should have asked. ‘After Bruno Taut (Devotion to Drift)’ (2013), image 1 below, is a new commission inspired by modernist architect Bruno Taut’s glass architectural fantasies…a constructed land of elaborate elements “meant to interject an element of social reality to the world” as it related to the impoverished South Korean female workers who earn their living making beaded necklaces up until the 1980s, thus symbolising social and gender inequalities – a hot topic right now thanks to Emma Watson’s recent speech at the UN. ‘Mon grand récit: Weeping into stones…’ (2005) shown in images 4, 6 and 7, is part of Lee Bul’s grand narrative referencing Jean-Francois Lyotard’s definition of post-modernity as the end of great narratives, alongside Thomas Browne’s quotation “Weep into stones…” referencing mortality. This visionary world encompasses roads, buildings under construction/in progress, bright light advertising and commercialism, 22nd Century city ideals and skyrises,  the destruction of the land referencing climate change, all on different scales and sizes almost looking, in its entirety, like a model of a somewhat twisted reality of a fairground ride. Perhaps this is a connection to how the negotiation of a city feels today? I’d certainly say that about Shanghai. Other works on the first floor included ‘Bunker (M. Bakhtin)’ (2007/12), images 8, 10 and 11, which resembles an island in its own right, an installation with a sound element that helps to build a sense of language, communication and fragmented narratives that build an associated meaning for the space.

On the second floor, two of the gallery spaces on the second floor were installed with the works ‘Diluvium’ (2012), presented in three different curatorial amalgamations hinging design and art. Firstly, the drawings and planning 2-D framed works were hung in a salon format, in series when needed, if not feeling virtually every piece of wall space. Secondly, the flat concrete gallery floor was then interrupted with ply wood ramps to soften the experience of engaging with her sculptural pieces, works in process and maquettes meant to destabilise the viewer…although as I was watching people in the space, it actually made them engage with the works more easily as it cut though the clinical nature of a gallery space. Finally, 3-D works were also shown as if in a workshop or studio, on work-like benches and platforms, referencing the possibility of how the artist might work.

Many of her 2-D drawings had vector-like qualities, organic land forms are broken down into fragments and more designed shapes and structures. As you enter the second floor you are confronted with a visually confusing mirrored installation that encompasses the space wall-to-wall. Called ‘Via Negativa’ (2012), it is a labyrinth constructed to muddle our sense of space through multi-faceted and highly reflected walls and surfaces. Needless to say, a few bumps and near misses happened, and a few obligatory mirror selfies taken. They should definitely have a sign saying to go in with no baggage. The maze culminates in the fun of an infinity tunnel of mirrors. It is to communicate an analogy for the human mind, or in my opinion, a window into the mind,

More playful in my opinion than uncomfortable. This exhibition is a must see, one of the strongest I’ve seen at Ikon Gallery for while, both in the artist’s concept, the works on show and its curation. At the moment, investigations of the utopian-distopian global city, within a sci-fi imagination, is somewhat of a contemporary culture trend having very recently worked with a handful of East Asian artists that are investigating similar trains of thought…and I’m about to write an article for the Transnational Dialogue 2014 catalogue (a project that I need to fill you in on) about the relationship between the artist and city…so perhaps she might get cited too alongside Cao Fei, Wu Chi Tsung and The Temporary. I’ll keep you posted.

‘Lee Bul was born in 1964 in Seoul, Korea where she lives and works. Lee Bul was initially academically trained in sculpture but her interest quickly diversified into other techniques including performance art. She incorporated her own body, contradicting general perceptions of idealized human appearance, sexuality, gender, and rebuking the repression of women within a patriarchal society. Her installation entitled Majestic Splendor (1997) at the Museum of Modern Art; rotting fish encrusted in sequins, a commentary on the ephemeral nature of beauty and the powerlessness of women, caused a furore and affirmed her global reputation as an intrepid emerging artist. Much of her attraction lies in her ability to bring together diverse themes, at once traditional, contemporary, provocative and timeless.’ – Galeries Thaddaeus Ropac 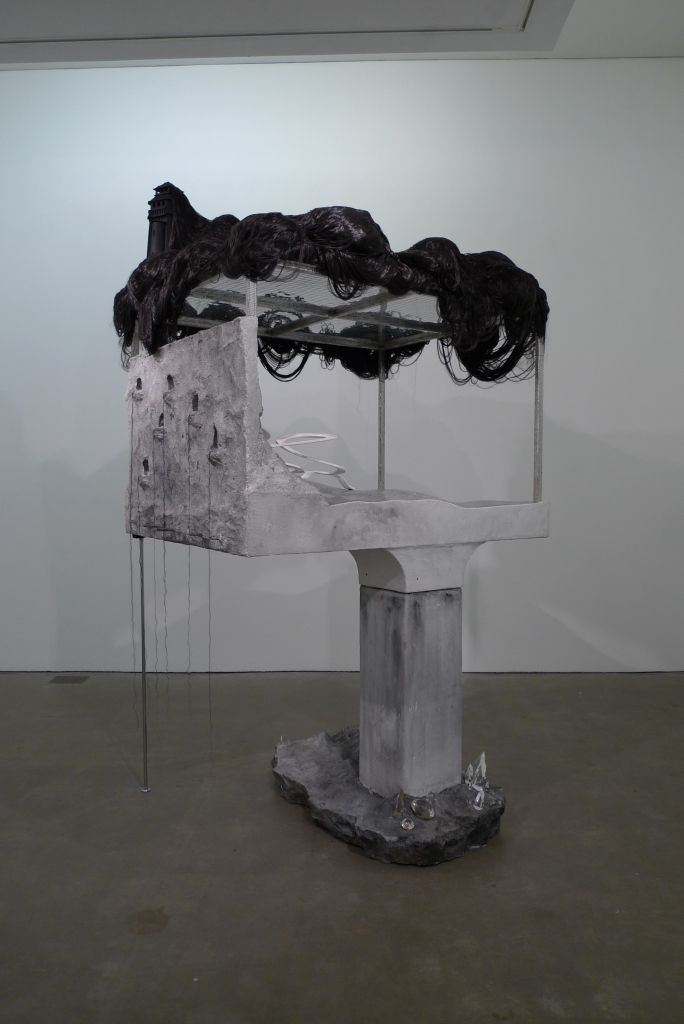 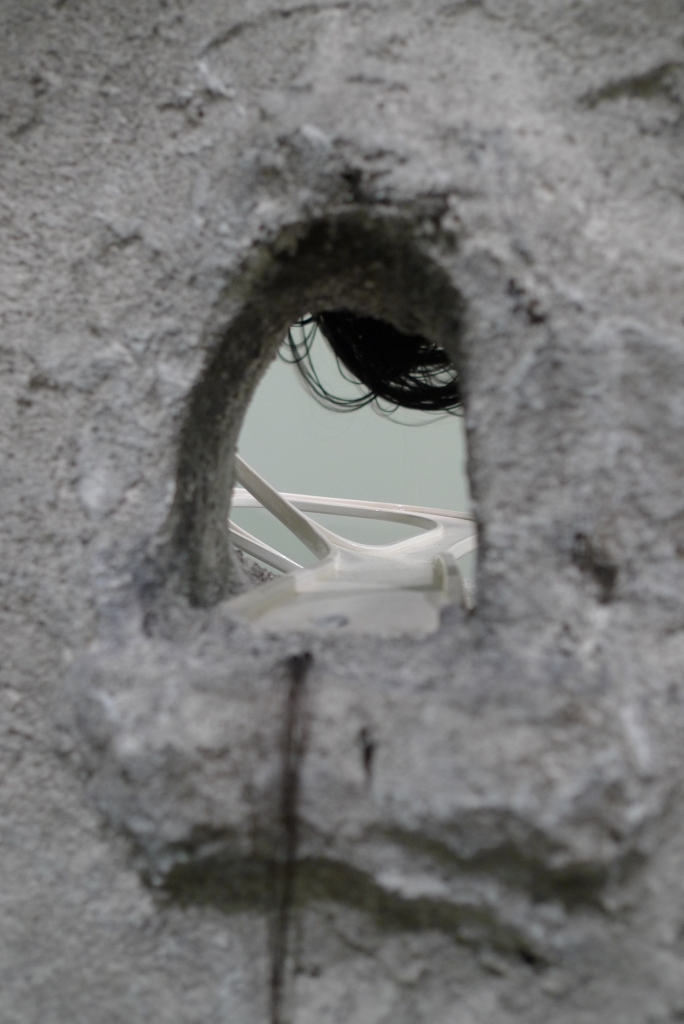 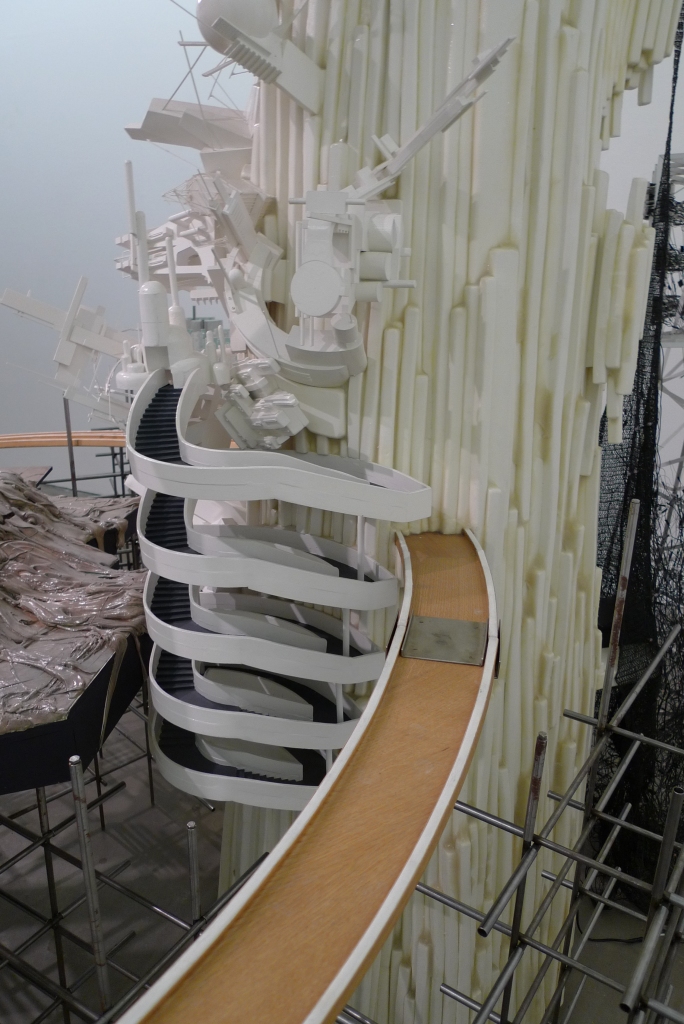 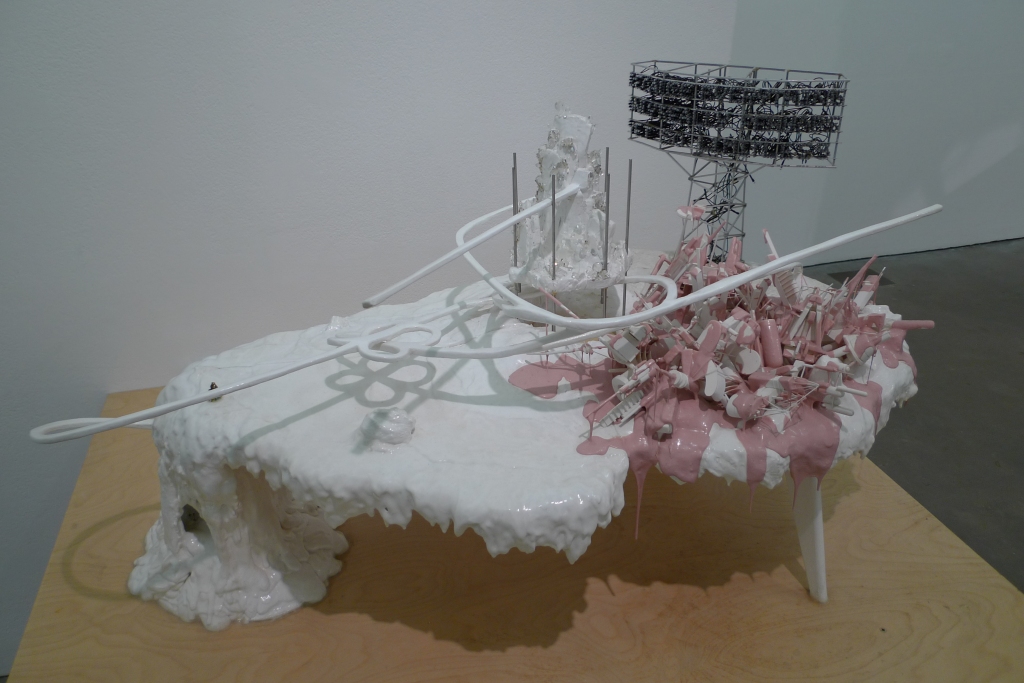 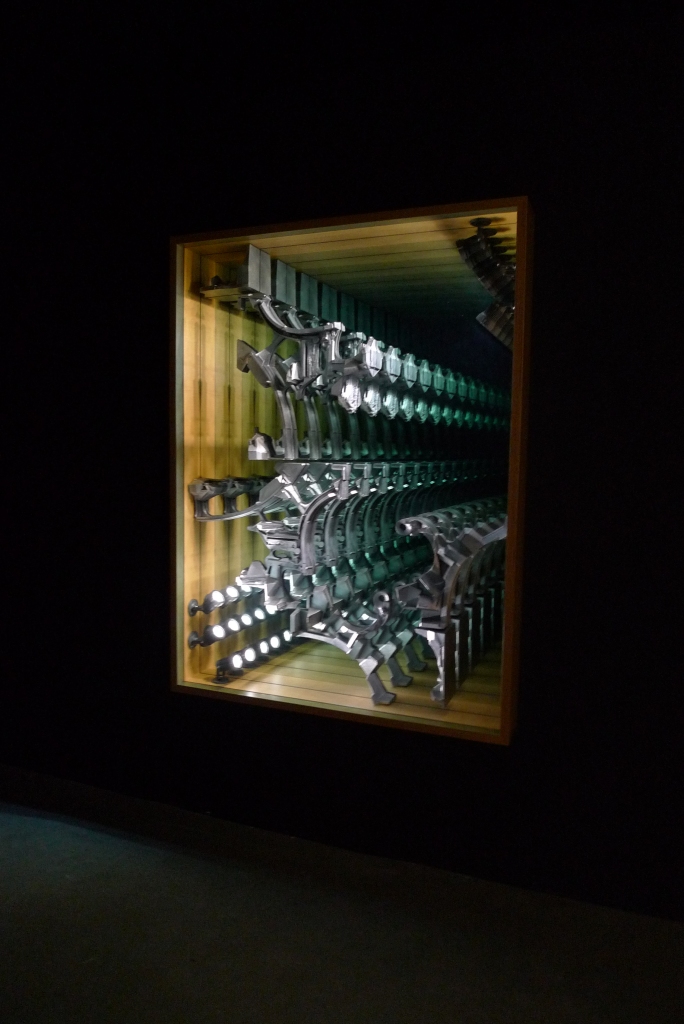 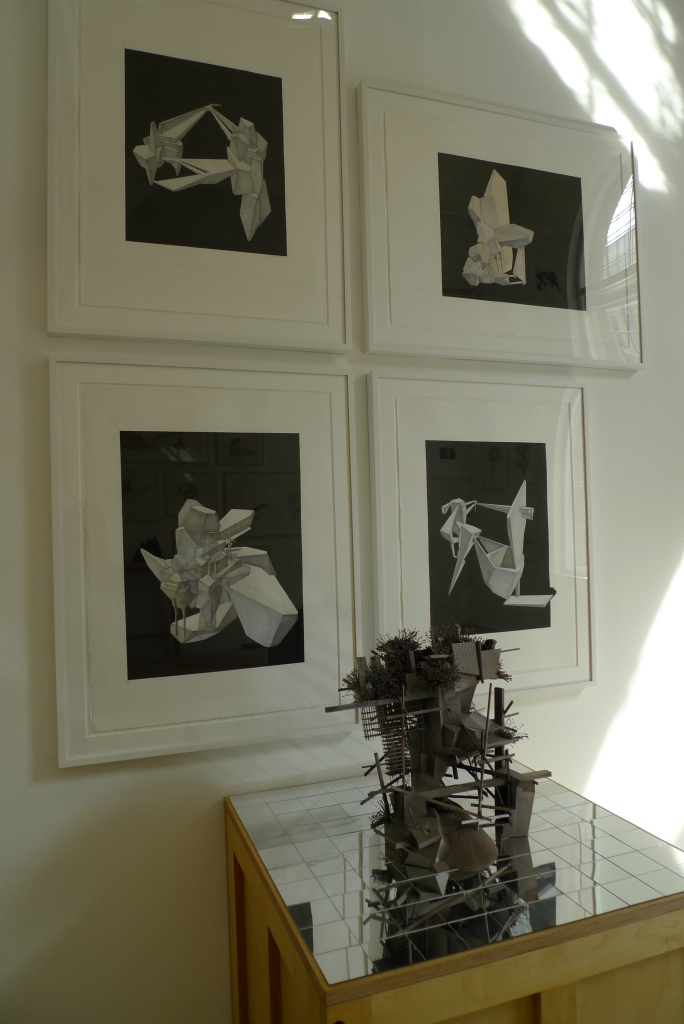 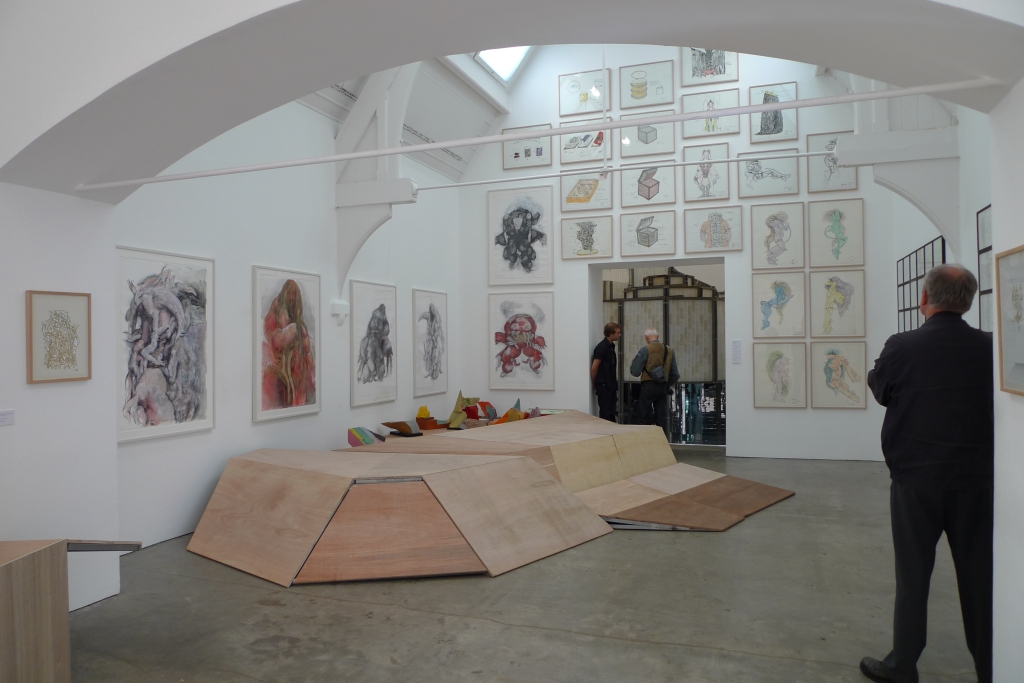 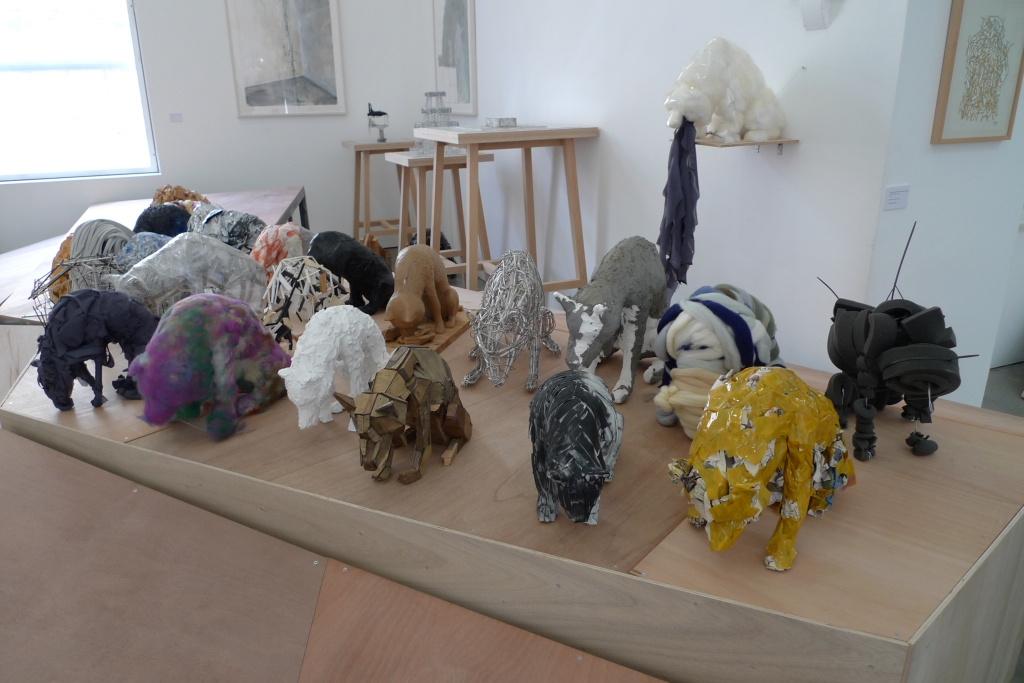