Last night, after a round trip from Northampton to Milton Keynes for all things arts workshops (and to sort out an glitched up Apple product – always a faff), I went to see two contemporary Chinese design shows that are currently happening in London. The first was ‘Graphic Design in China 2003-13 Exhibition’ at Asia House, as part of the London Design Festival 2014 and the second, ‘Design Shanghai 2015 Preview Party’ at the new China Design Centre, which only opened earlier this year and is slowly establishing itself in the Chinese and cultural circuits here in the UK.

‘Graphic Design in China 2003-13 Exhibition’ at Asia House is based on one of the most influential large-scale integrated design competitions Graphic Design in China (GDC).  The competition, run by Shenzhen Graphic Design Association (SGDA), celebrates outstanding achievement in design, and shows work by top designers alongside emerging talent. With the theme of ‘Design for China’s Future 2003-2013’ this pop-up exhibition displays a broad range and certain strength of Chinese design. “The works on display reflect the relationship between modern design, culture, commerce and daily life.”

The idea of the pop-up exhibition is a curatorial strategy that I feel is on the rise as arts funding becomes more restricted thus encouraging more “grass-roots” creativity, versus in general the arts becoming more interdisciplinary and collaborative in practice, transcultural and international in terms of access. This show had to be “temporary” as it is only on for 5 days (15-20 September 2014) as part of the London Design Festival 2014. It was simplistic in its design, largely floor based in terms of presentation and installation where 2-D-lo-fi-high quality prints of designs or design process were displayed on fold out table-like stands where the table tops were made from paper. There was minimal wall design or interpretive information, provided only through another table top in the centre of the main gallery space. The edge or innovation in this show was that you were asked to take home the artworks if you liked them (I might have gone a little overboard with this freebie offer but I see them informing a future workshop day on self-publishing with BA Fine Art students at one of the universities where I teach) as the prints were produced on this lo-fi-high quality scale, piled up under each table where the prints were displayed. Works on show ranged from book design, typography, web design, advertising and marketing, visual arts and more…as you can see in the images below. The simplicity bred a kind of creative clarity as there were no distractions, just a focus on each of the stands. This show made me think of the Croatian Design Superstore that I saw in Zadar, Croatia, earlier in the Summer…it was very similar in terms of its exhibition design and curatorial strategy. The exhibition initially toured in Seoul and will go on to tour in Melbourne after London. 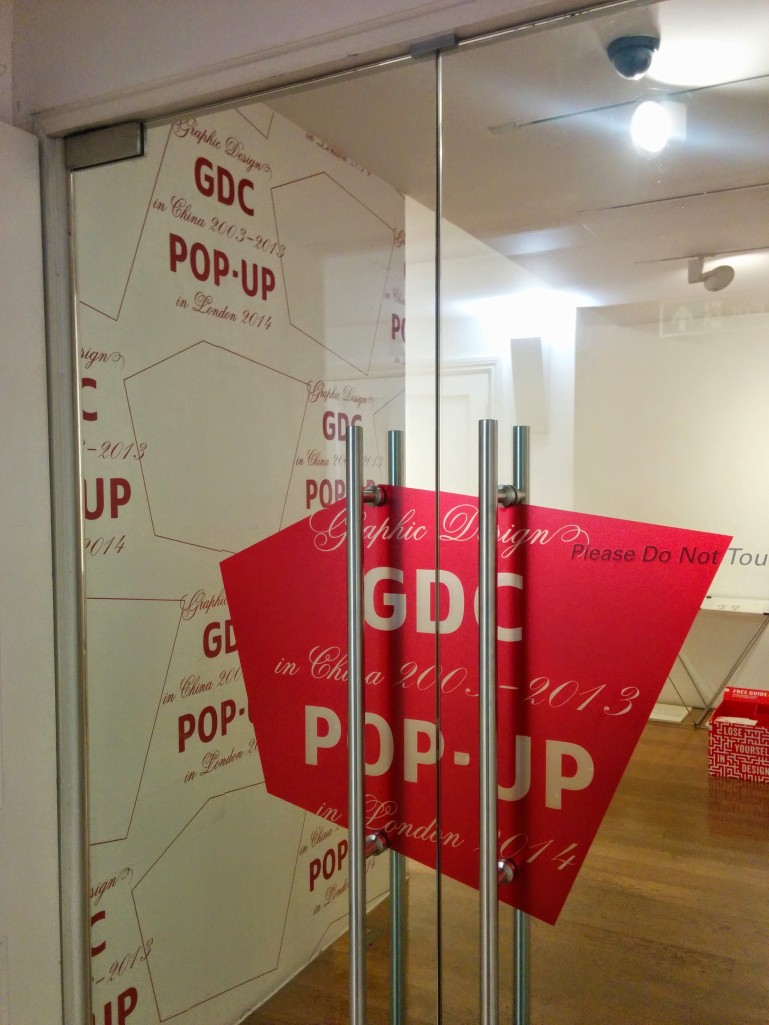 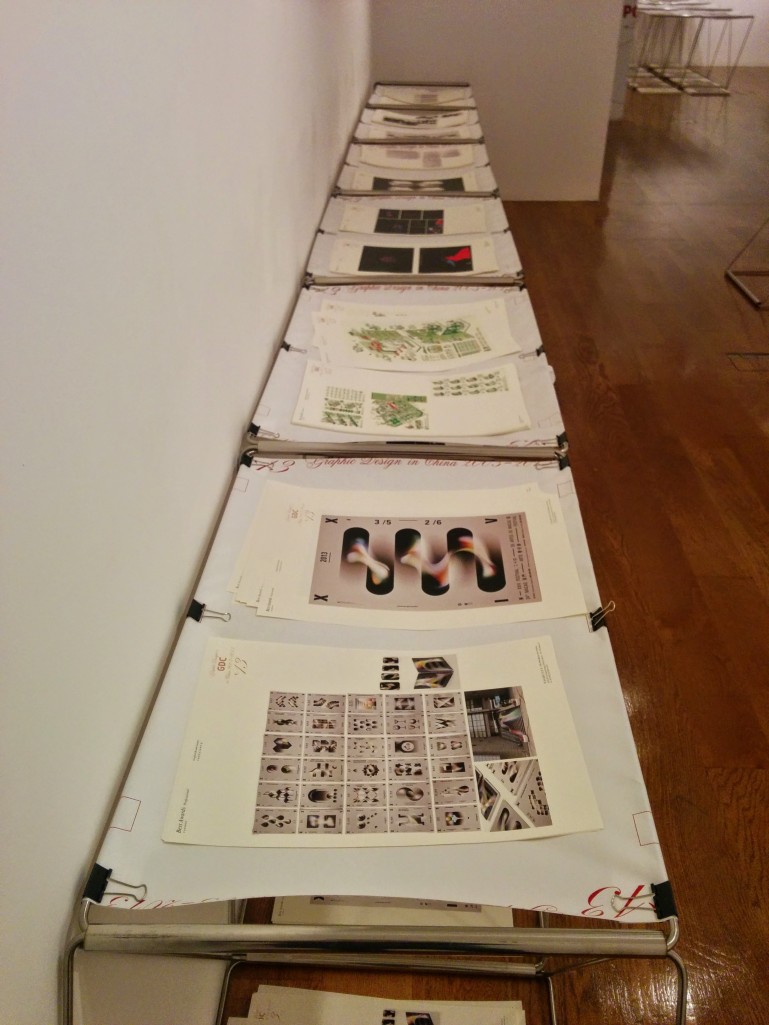 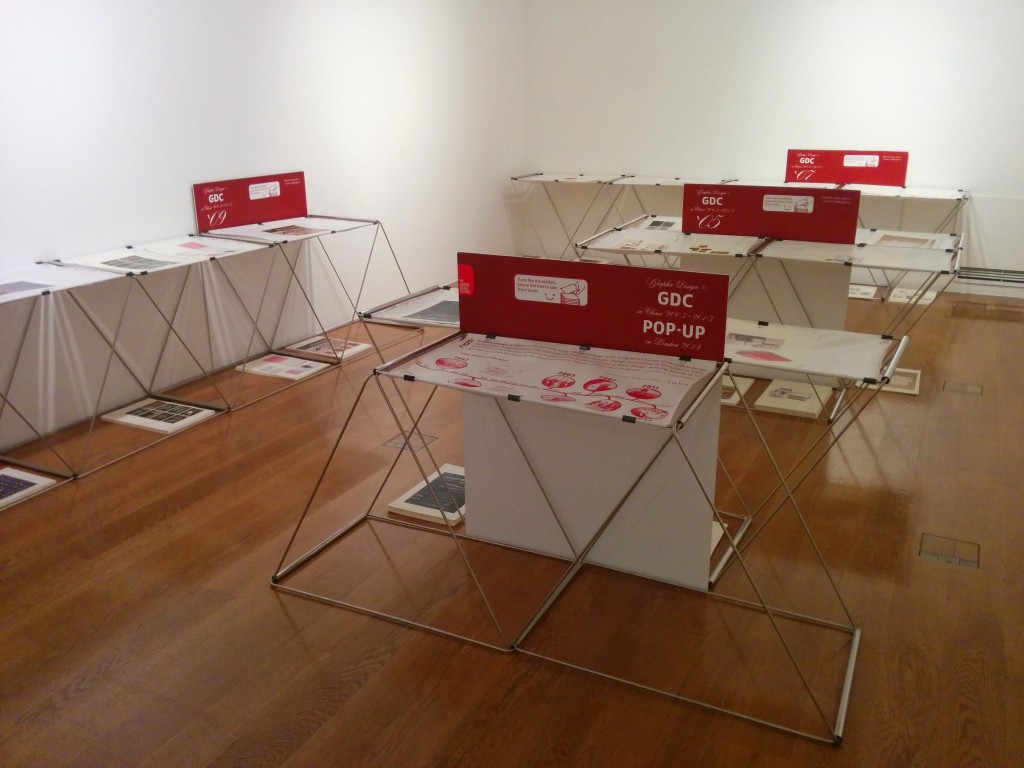 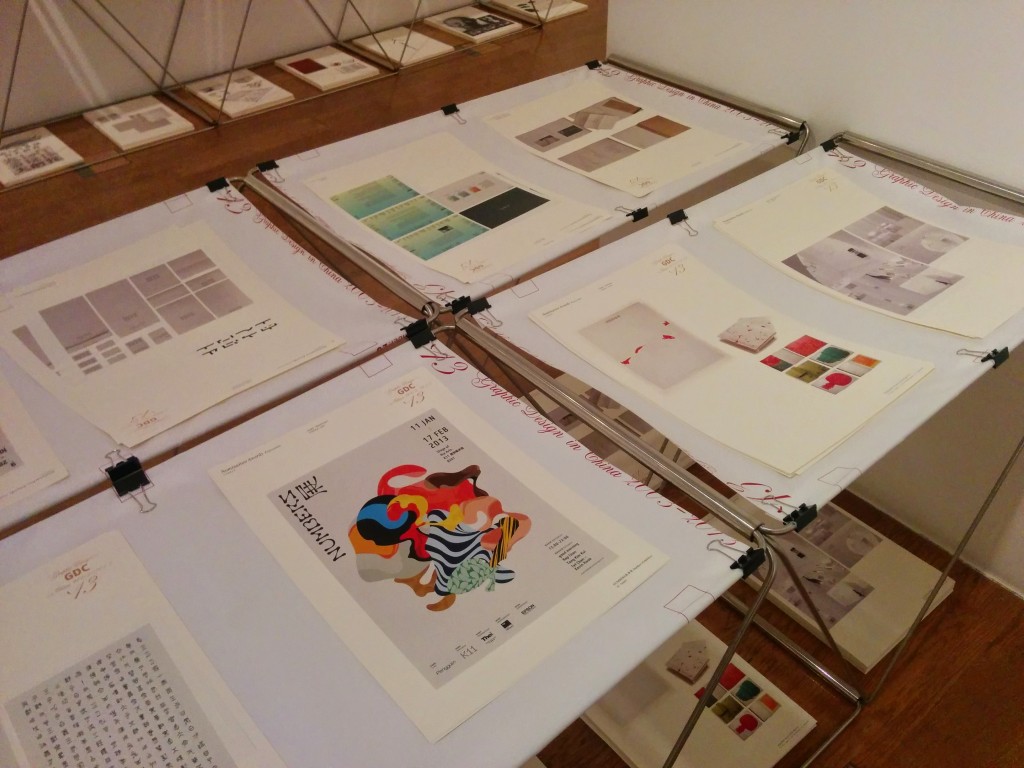 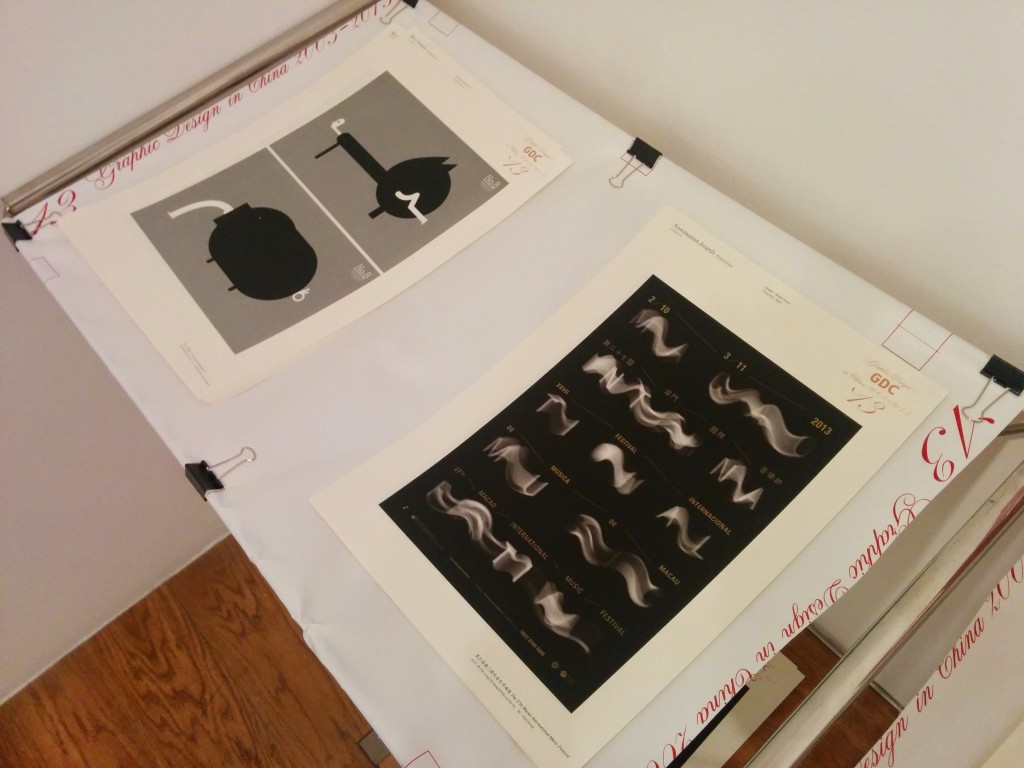 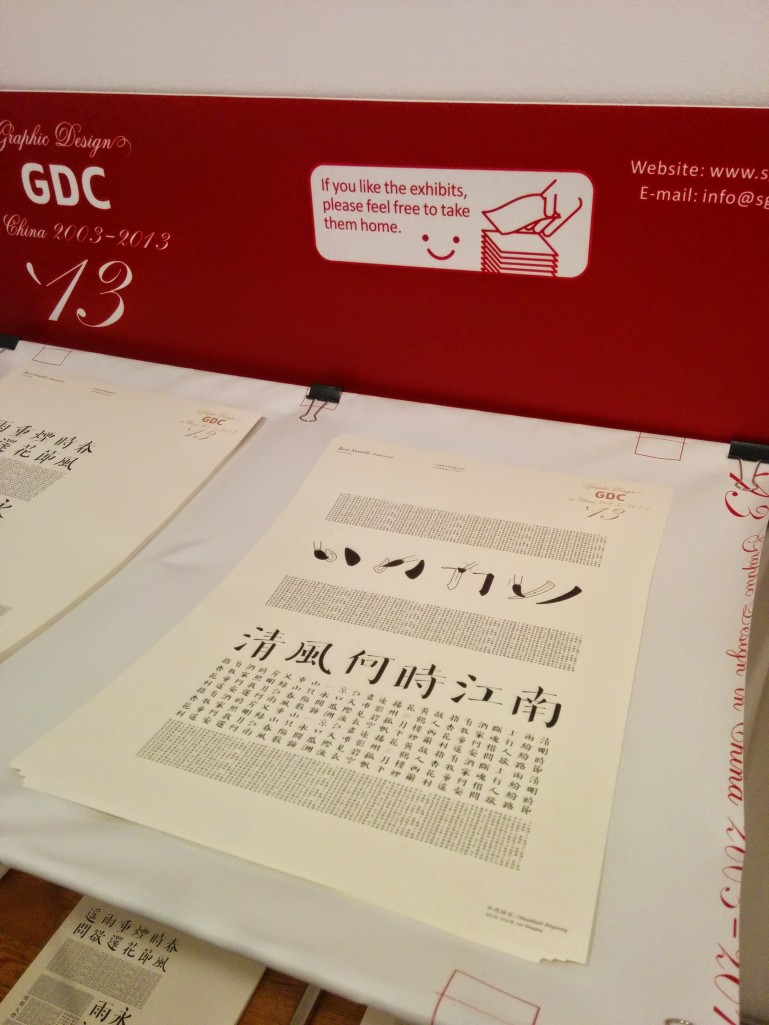 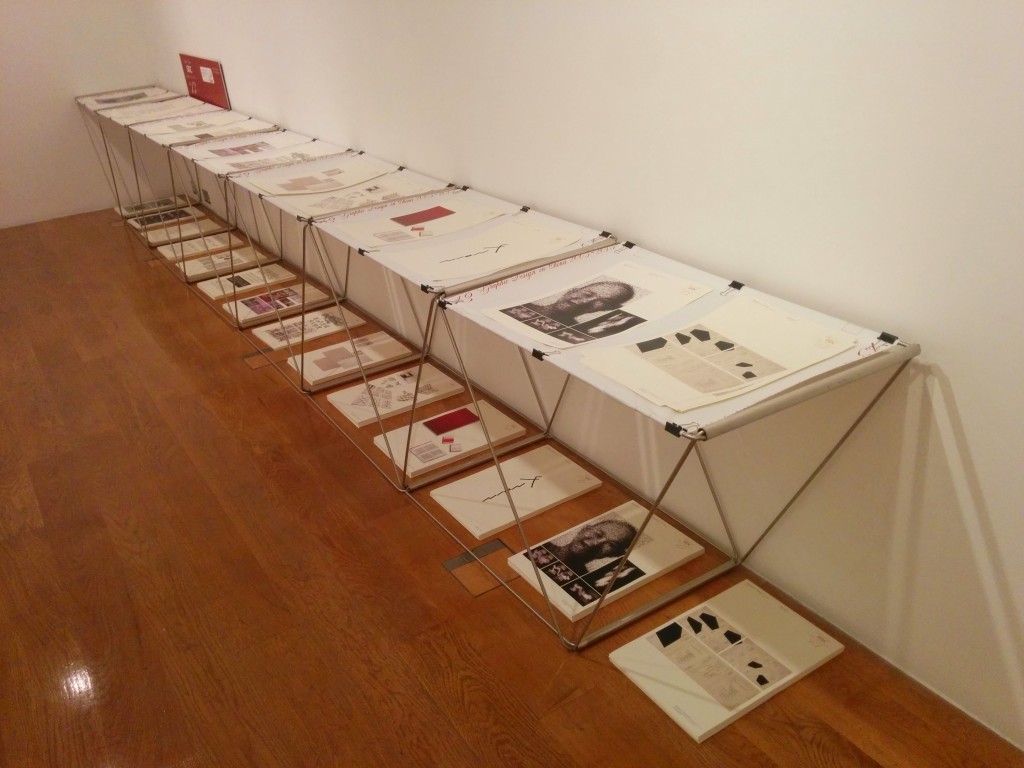 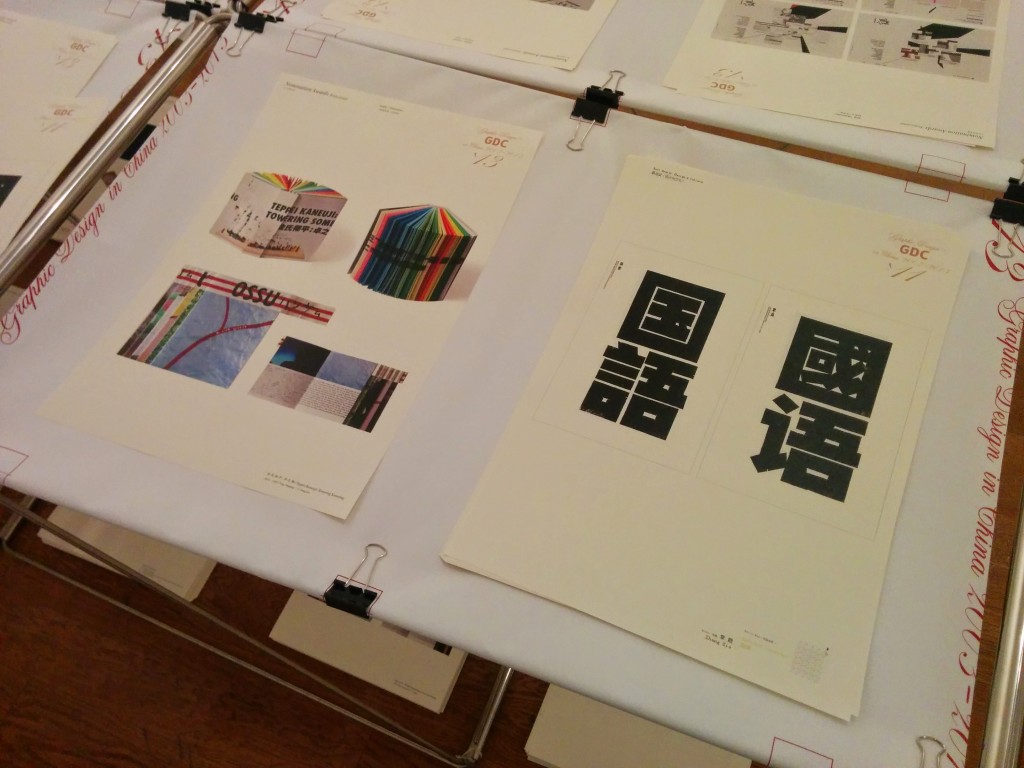 The ‘Design Shanghai 2015 Preview Party’ at the new China Design Centre attempted to give the UK a preview of what was to come for next year’s Design Shanghai show, building on the success of it’s 2014 inaugural exhibition with over 47,000 visitors, organised by Media 10. The 2014 show, aimed to ‘break new ground and set a precedent in China’s ever-growing design community by showcasing the best design brands from across the globe to become China’s premier design event.’ The China Design Centre was founded in 2013, with the centre only opening earlier this year, by a team of architects and designers with a professional and creative network across China, China Design Centre promotes the understanding of China’s rapidly evolving design culture. 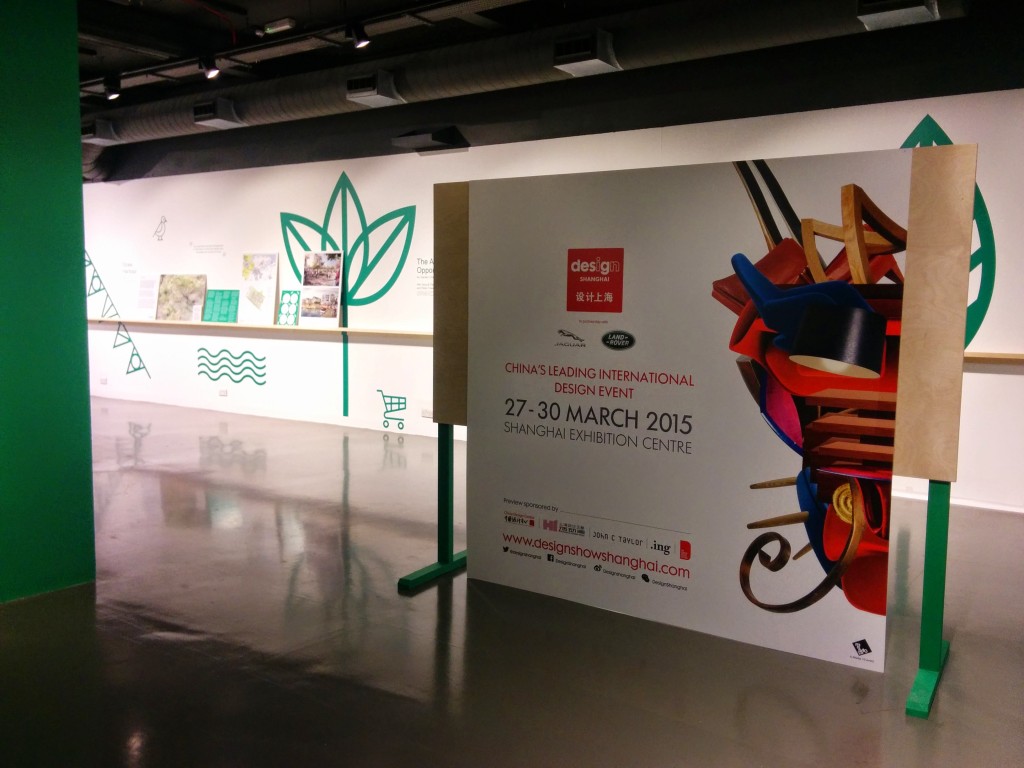 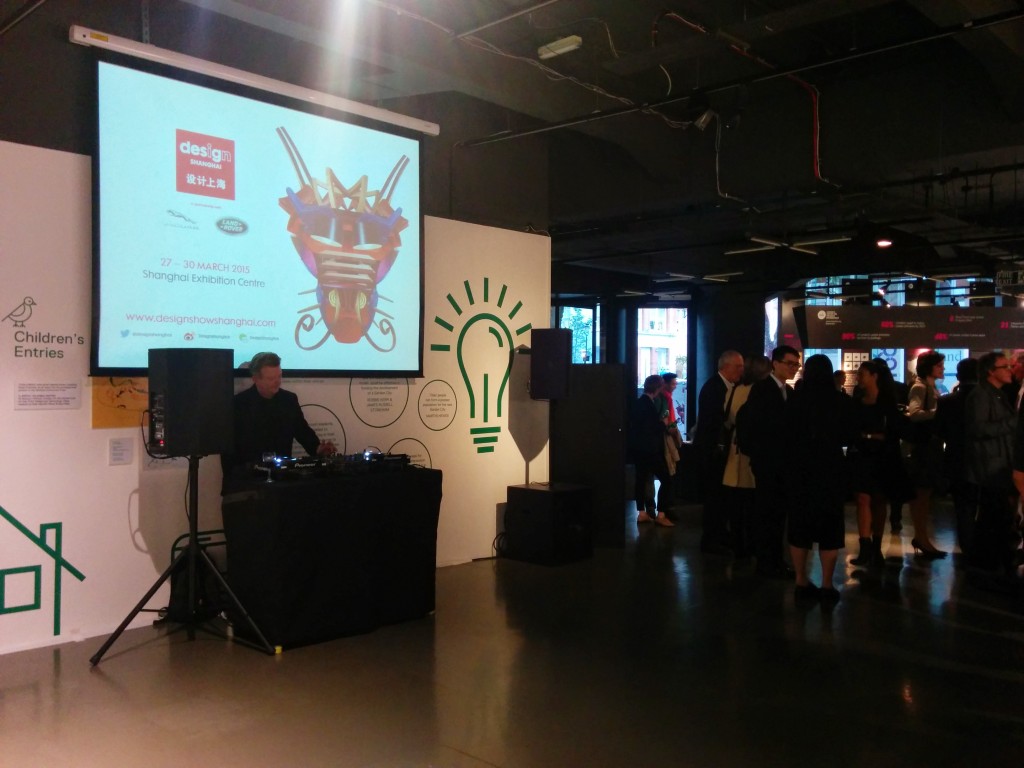 The evening was more of a corporate “exhibition centre”-like affair, expected to some degree, with a crowd that I was unsure of as to their relationship or potential impact on the project. The selection of design on show was also very limited, somewhat safe with only a couple of works that I felt showed strength in concept…and hardly any Chinese design. It seemed more of an event to encourage business partnership and potential sales whilst presenting a survey of international design, rather than to cultivate or celebrate creativity that the ‘Graphic Design in China 2003-13 Exhibition’ at Asia House could be seen to clearly communicate.

In my opinion, I see design as a creative discipline that is more translatable in terms of its visual language in comparison to contemporary art, as it is bound to semiotic, hermeneutic and linguistic infrastructures to inform a necessary form of communication. It is easier to identify what is good design as so much is down to detail and finish…a certain edge…and ultimately, communicating a very specific outcome or purpose. Contemporary art is, again in my opinion, so much more subjective in terms of quality and taste, value and likability…but you readers could have a different opinion. These exhibitions and previews showed the spectrum of design concept to design commercialism. ‘Graphic Design in China 2003-13 Exhibition’ at Asia House is on show until 20 September 2014, and ‘Design Shanghai 2015 Preview‘ until, well, I’m actually not sure, as I can’t seem to find concrete information on the preview show anywhere. I’ve been in London four times in the last five days…today I have nothing in my diary apart from family commitments. I’m looking forward to the train hiatus, at least for one day.