At the beginning of March when my PhD exhibition – ‘The Temporary: 01’ – was opening at the ARTicle Gallery, Birmingham, manaXi, who I’d only been with for two months by that time, gave me two tickets to Soundwave festival 2014…a music festival that I’ve wanted to go to for years. Two months into a relationship is pretty confident right? We knew, as we still know now. So on the 17th July, we got on a plane to Zadar, Croatia, for a week of silencing to deafening escapism, always with a beautiful view, along the Dalmatian coastline. I love flying. I love being in transit, in totally untouchable space. 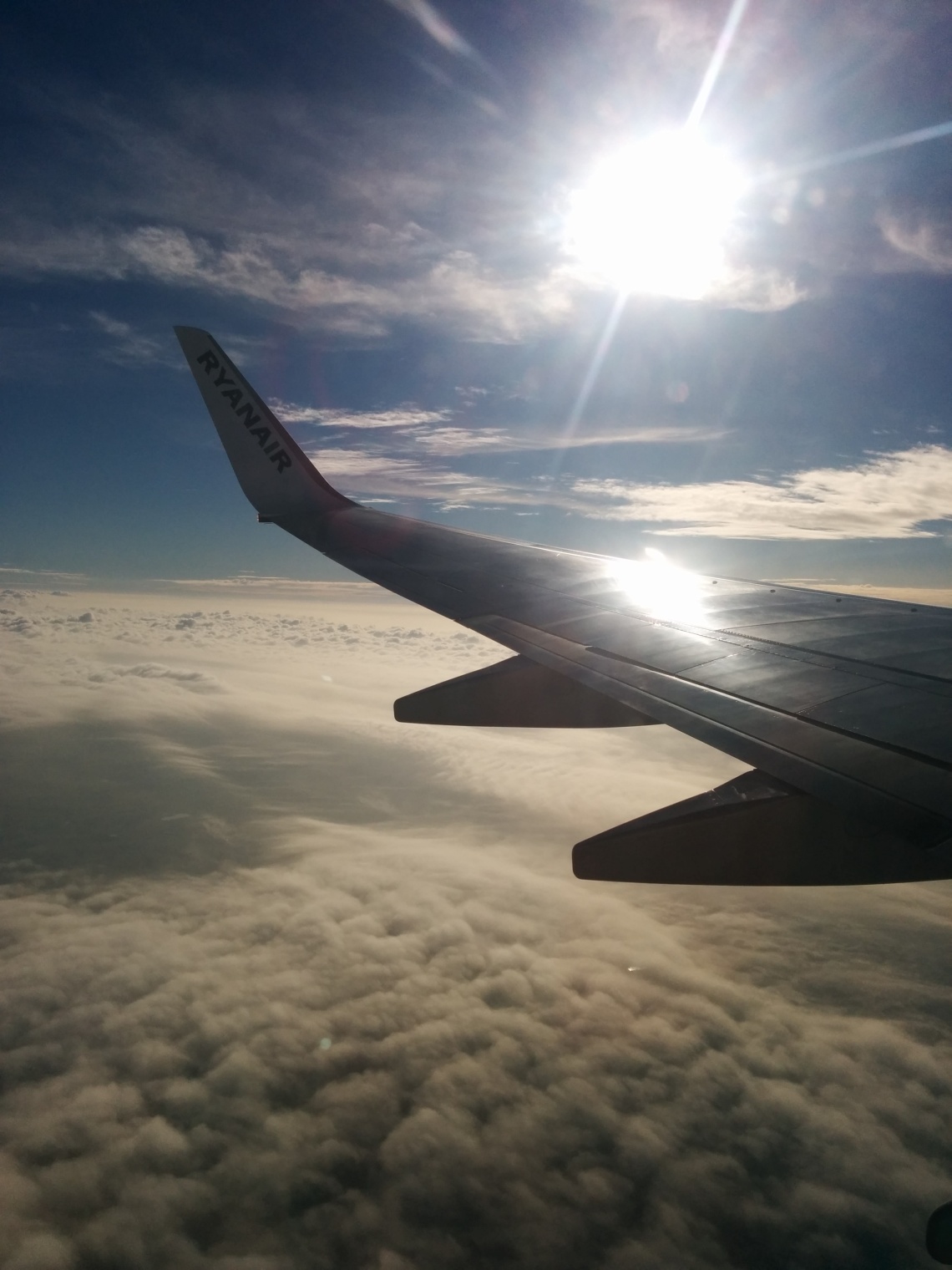 We flew into Zadar for one reason only – to see the renowned sea organ (in Croatian Morske orgulje) and ‘Greeting to the Sun’ (or ‘Salute to the Sun’), both public art installations that I’ve spoken about here before in my post ‘Zadar’s sound and light’. After a very early 7am flight from London Stansted, where Rachel went apparently “a bit China” (it’s now become a wordgirl stock phrase) as I rather curtly asked people to move down a very packed bus to get to the airport at 5am, we arrived in Croatia, collected our hire car – a Mazda 2 – and set off north for about 10km to get to central Zadar.

After a parking meter faff around, it was exploring time, straight to the sea organ, which immediately silenced us, stopped us, consumed us, and those around us. So simple and discreet in its physical presence and form, yet aurally unmissable, a completely unpredictable seaphonic cacophany from sea level to shoreline…sound art and public art…where in fact, when swimming in the sea by the sea organ, your sense of the sound changed due to your proximity to and in the sea (a very salty and choppy sea there too that I miss swimming in every day). As I said in my previous blog post about it, the organ, which looks like an average set of steps from a distance, is seventy metres in length running along the Croatian Dalmatian coast. It is connected to the sea by 35 pipes of different lengths, diameters and tilts. As the waves push air through the labiums (whistles), it plays out 7 chords of 5 tones through the perforated stone stairs producing the sound you can hear in my films below. 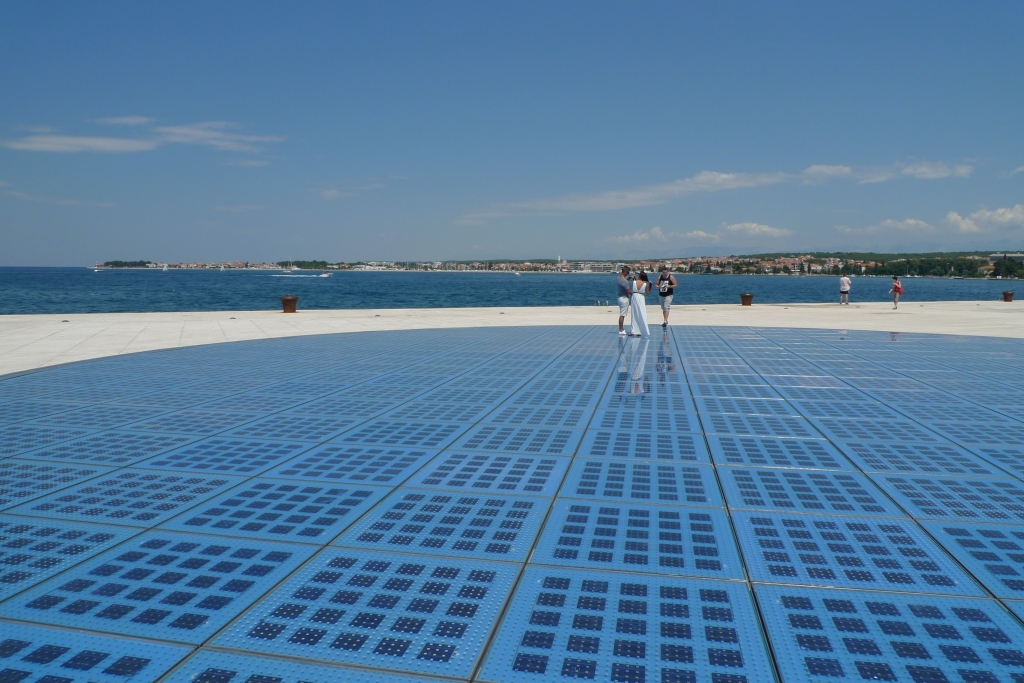 ‘Greeting to the Sun’ looked a little odd in it’s daytime territory. Burning hot bright blue glass underfoot, almost looking like a sundial waiting for a midday shadow, but you had to wait until dusk for it to come to life. In the meantime, manaXi and I wandered the city streets, reading histories and stories, taking in views, places including the Land Gate and Town Loggia…stopping for needed Pivo (beer) and macchiato (coffee that became a holiday addiction), although the first time I ordered one I got served cold milk and a shot of coffee – total lost in translation until I learned macchiato veliki (large milk coffee). Language learning curve as always. manaXi and I established there are a lot of cafes and restaurants by Toni. A common Croatian name? Who knows. We also caught a pop-up design gallery, the Croatian Design Superstore, which I thought curatorially was rather special. Constructed use of compacted plywood. Simple label hangings. Relaxed shop-like display. Some of the products on sale were pretty nice. They have a Facebook page if you want to find out more. I particularly liked the typographic prints, simple fashion cuts by I-GLE, and wicker rucksacks (there were typewriter bag designs too)…all very wordgirl. 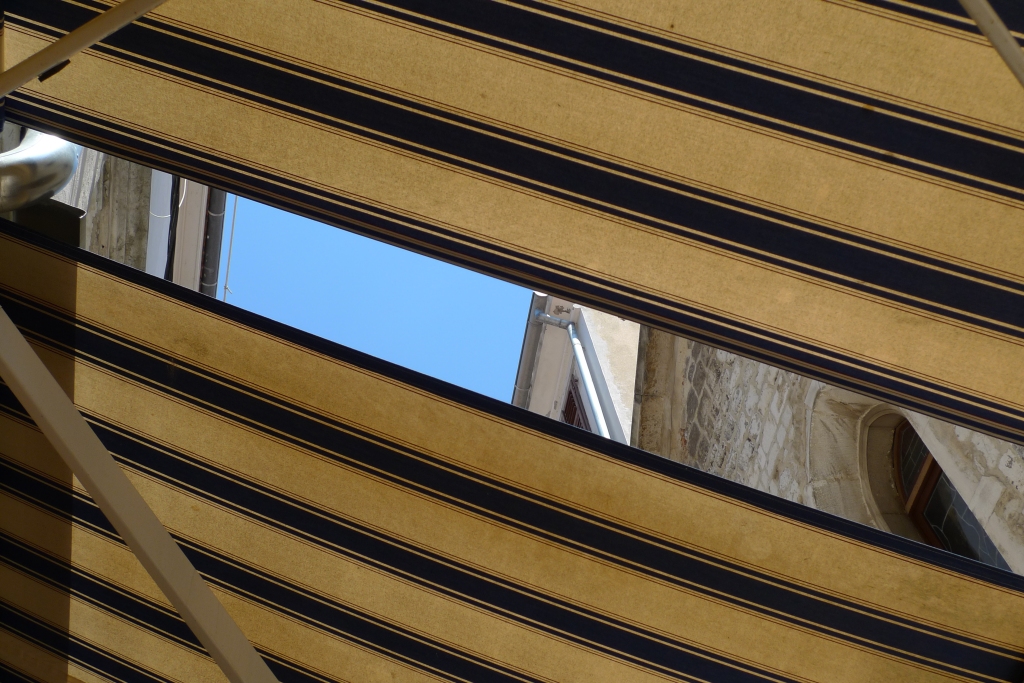 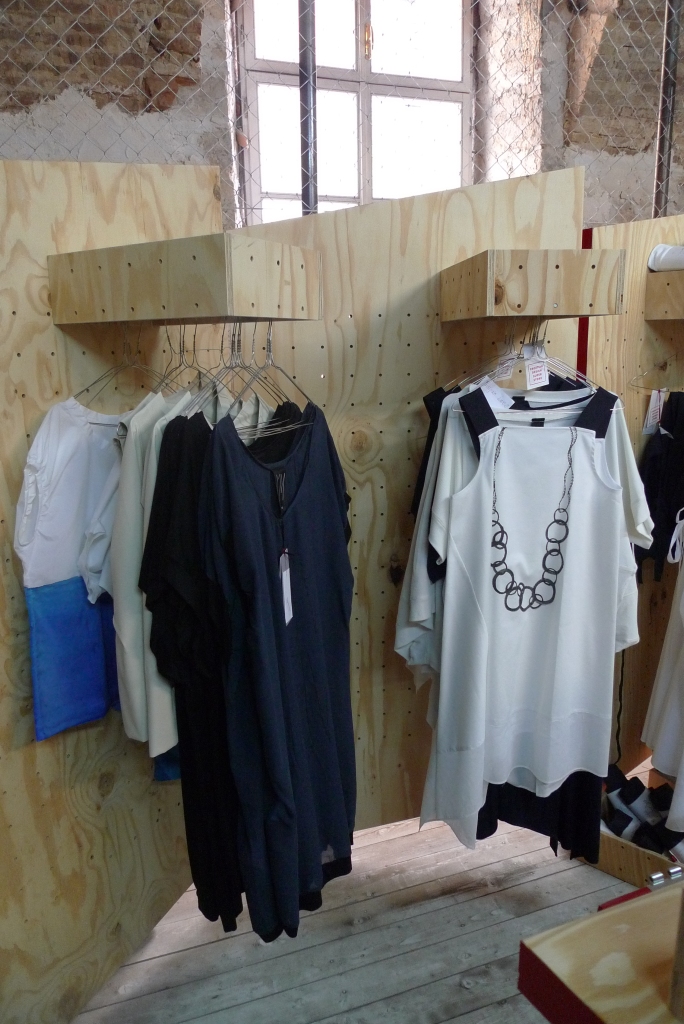 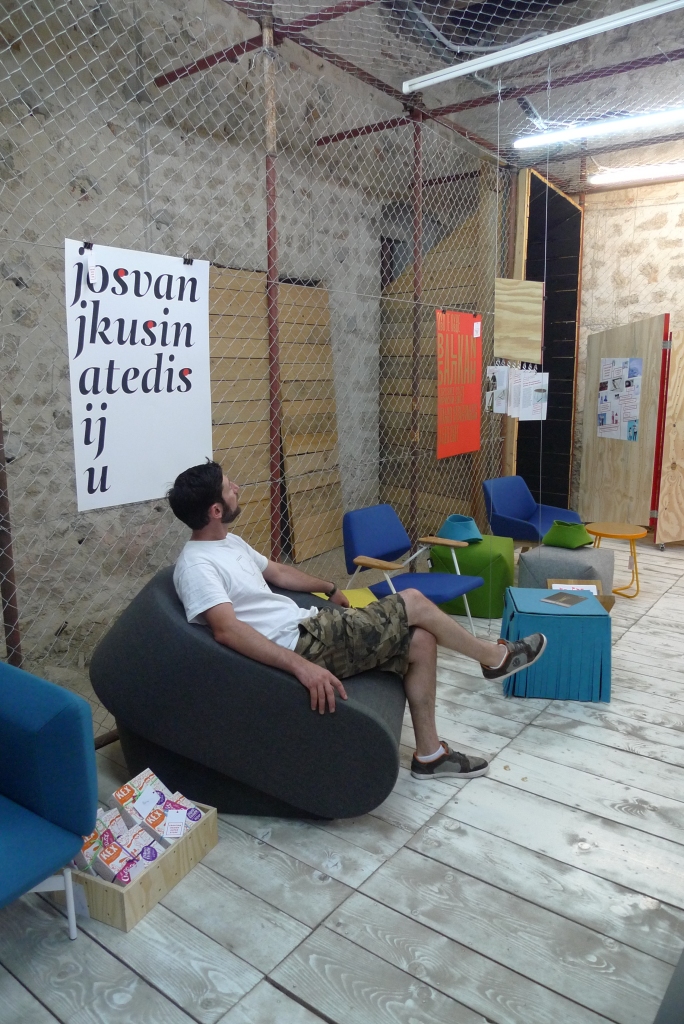 After a ridiculously great dinner at the organic restaurant Pet Bunara, which is you ever go to Zadar you have to eat at – I had a sheep’s cheese and anchovy salad and manaXi had stuffed veal with a side of fresh gnocchi (shown below) – we went to see the sunset from the sea organ, where, at the same time, we also caught the Rainbow Warrior Greenpeace boat as it came in to dock for the night. Once in a lifetime experience that manaXi was a little occupied with…and it certainly is one big vessel. The Greenpeace crew were touring the Adriatic Coast in response to climate change. 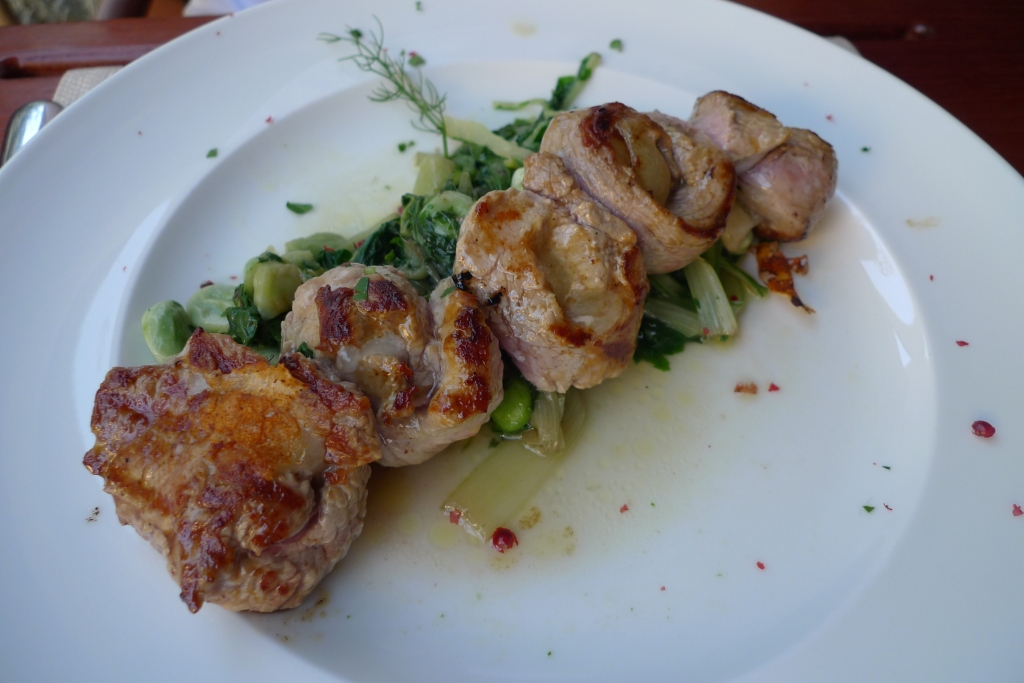 According to Alfred Hitchcock Zadar’s sunset is one of the best in the world. After getting silenced and lost in the sunset, together…manaXi and I have a tendency to get lost in the sky, I cloud dream far too much…we saw ‘Greeting to the Sun’ come to life under a flurry of feet and people. It was something else to see this many people engaged with public art…and to see how much of an effect two simple pieces of public art can have on one city. ‘Greeting to the Sun’ consists of three hundred multi-layer glass panels set on the same level as the quay paving, in the form of a circle having a diameter of 22 metres. Beneath the conducting glass panels are photovoltaic solar modules providing symbolic communication with nature for the purpose of communicating – by sound in case of the Sea Organ, and by light in this case. The lighting fixtures built into the circle are activated by the sunset, producing ‘a game of light to the rhythm of the waves and the sound of the Sea Organ’. Both the sea organ and ‘Greeting to the Sun’ were made by architect Nikola Bašić as part of the project to redesign the new city coast (in Croatian Nova riva), and the site was opened to the public on 15 April 2005.

Later that evening, we drove South along the coast to get to Tisno where we were staying and where all things Soundwave festival 2014. The next blog post will be about the festival and it’s pretty high energy, high music, high colour, high profile and well…pretty damn big. So many more firsts for manaXi and I. Get your ears and eyes ready….mine are still recovering. 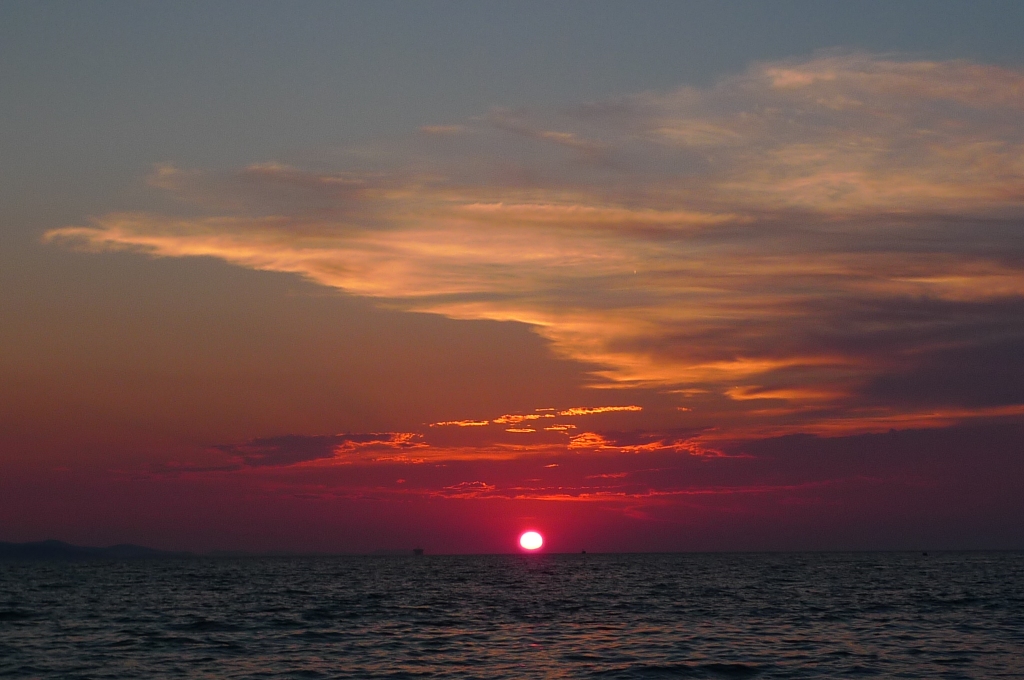 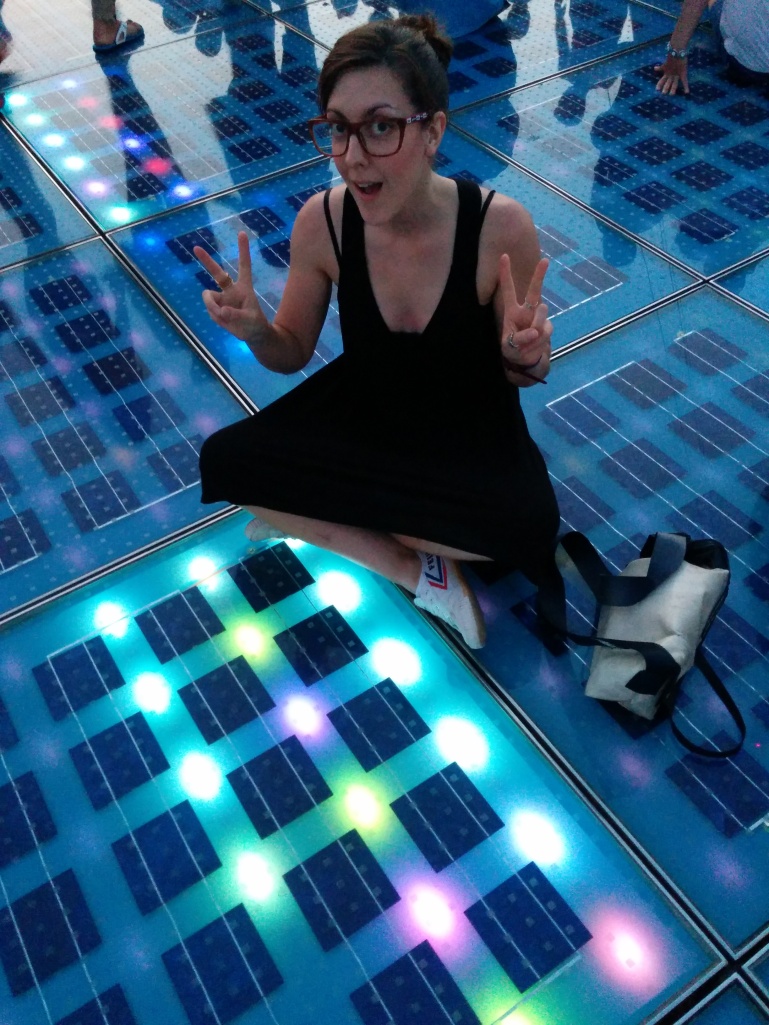 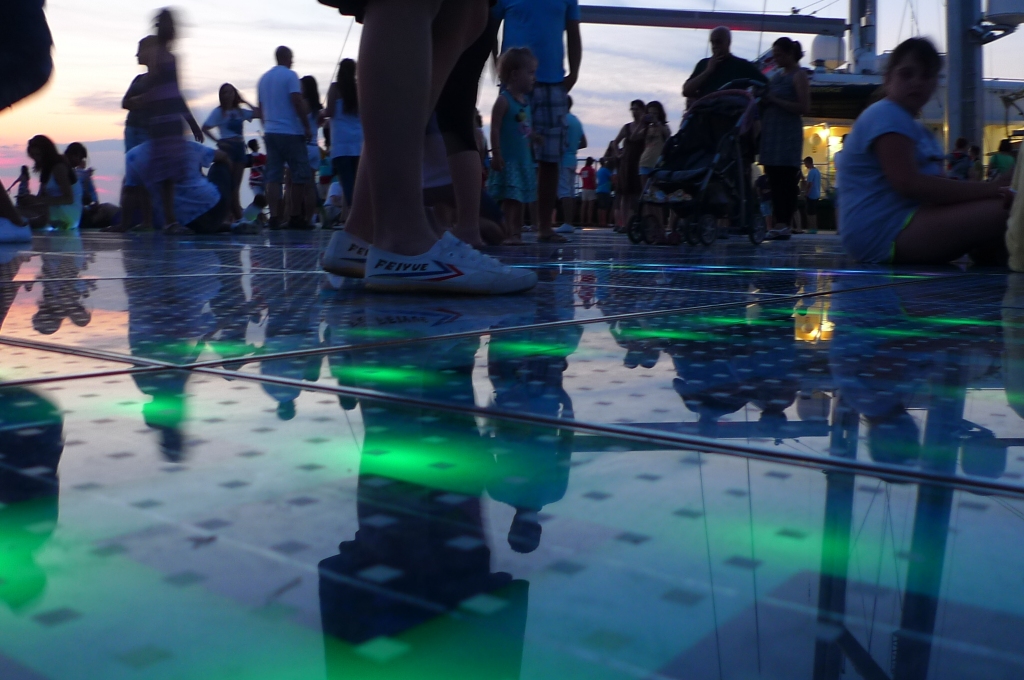 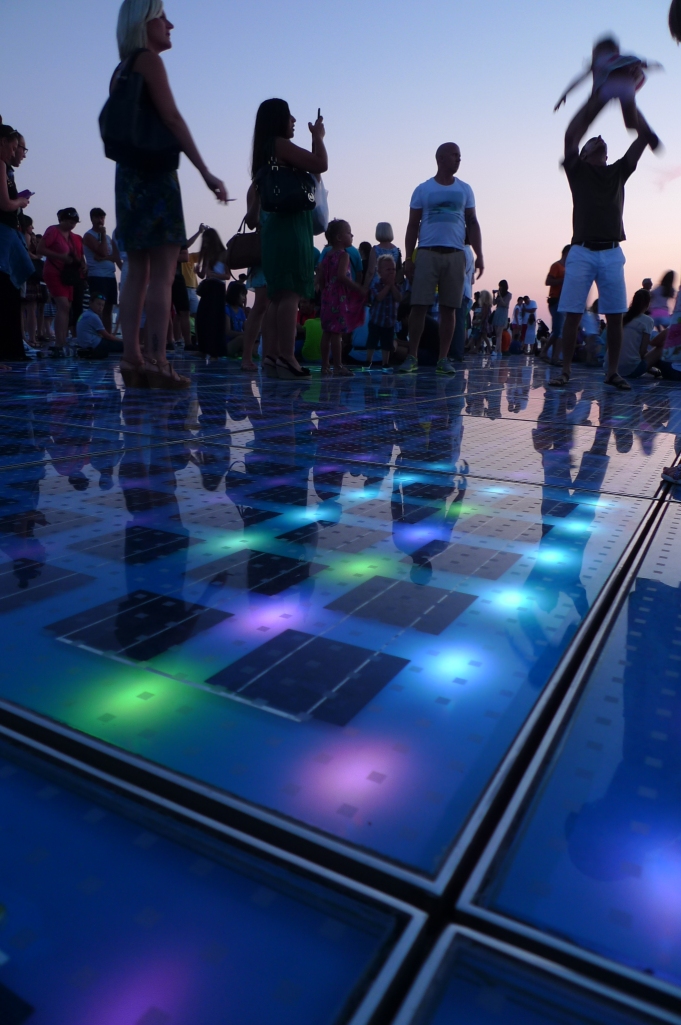