We know them, we see them on a daily basis, we can’t avoid them. We take them (or most of us do to which I put my hands up high as below…probably far too often too), we hate them, we love them, we expect them, we feed from them. The “selfie”, the in part narcissistic image we take of ourselves (for ourselves?) and share with the digital and real world through social media for a potential response or reaction. Why do we do it? What does it mean? And what is its place in contemporary art? Here are a few thoughts, a few articles, a few perspectives I’ve come across…what I have call “selfie” aesthetics from the voices of an academic, an actor and a contemporary artist…not forgetting myself.

The word “selfie” was awarded the Oxford English Dictionary’s ‘Word of the Year’ in 2013. “Researchers at the Oxford Dictionaries claim that recorded uses of selfie in 2013 rocketed from fewer than 500 instances per billion words used in January to more than 5000 instances per billion in October. And that doesn’t even count the number of times people used selfie in everyday talk or accepted it as a “real word” when others used it.” They define it as:

“A photograph that one has taken of oneself, typically one taken with a smartphone or webcam and uploaded to a social media website: occasional selfies are acceptable, but posting a new picture of yourself every day isn’t necessary.”

“Not just any self-portrait but one created with a digital device. Not any photo stored anywhere but one uploaded to a social media site. Selfie is a distinctive word for the digital, media-obsessed, share-myself-with-the world moment.” It is thought to become common place in language usage in 2002 in Australia, “in a 20-something’s photo and report of a drunken party, posted to an ABC Online forum: “Um, drunk at a mates 21st, I tripped over [sic] and landed lip first (with front teeth coming a very close second) on a set of steps…And sorry about the focus, it was a selfie.” (Information sourced from an article here). He would have no idea that his wordic colloquialism with friends would become the next big social phenomenon.

The actor-academic-writer-artist-dreamer-little bit of everything in the creative realm James Franco is famously known for his “selfie” obsession – coined the “selfie king” – through his Instagram account, where even his strap line for his account reads “Love to the Tweet generation”. Funnily enough in the last few days he’d posted a few images that the press and media have been all over for no real reason apart from ooo’s and arr’s of the provocative content – one was of Franco in bed snuggling up to another man, and another of his in his pants with his hand over his crotch (the second image he actually removed from online though it will always leave a trace). The difference with Franco, unlike other celebrities and their “selfie” narcissism, is that he clearly articulates a rationale behind them…he writes, he reasons, he translates…they become an aesthetic as part of his personality and being, his existence.

In an article for the New York Times from December 2013, Franco states “the selfie is one of the most popular ways to post – and garner the most likes from followers…I can see which posts don’t get attention or make me lose followers: those with photos of art projects; videos telling the haters to go away (in not so many words); and photos with poems. (Warning: Post your own, and you’ll see how fast people become poetry specialists and offer critiques like “I hate you, you should die.”) But a well-stocked collection of selfies seems to get attention. And attention seems to be the name of the game when it comes to social networking…ATTENTION IS POWER.” Franco sees the “celebrity selfie” as it’s own breed of “selfie” culture, where it confronts the press, media and paparazzi as they are giving away a photo that they would kill for. It also gives the average Joe a moment of insight into an unknown world when in fact it’s just as unknown as your neighbour or dentist or someone else who you occasionally see in your life but don’t really know. Celebrities just have some sort of value-added kudos and status (I’m not one to fuel celebrity culture…everyone is a somebody in my eyes). Franco also sees the “selfie” as an avatar, someone who you could be, a different side of yourself, the potential of your other self. Ultimately, he sees,

“In our age of social networking, the selfie is the new way to look someone right in the eye and say, “Hello, this is me.”” – James Franco

Marco Bohr, an academic colleague here in the UK, sees the “selfie” as a new economic order, where “selfies are a mimetic response to the rise of celebrity culture epitomised by Kim Kardashian”, impossible to be viewed autonomously as they fit into a larger context. Basically, the “selfie” contributes to the brand of the celebrity, increasing their status and their kudos, their social value. Bohr specifically looks at how the press and media pick up on and use celebrity “selfies” to curve and create economic trends and develop brands. He focuses on The Daily Mail, amongst many other newspapers and news websites, who constantly refer to celebrity selfies. “These reports usually follow a very strict format which can be broken down as following: a celebrity produces a selfie, the selfie is newsworthy because it is exceptionally sexy, beautiful, raunchy, funny, fantastic and so forth, in conclusion the report includes a brief update on the celebrity. Crucially, and this can be very subtle, these selfie stories often incorporate little hints how the celebrity achieves to be beautiful (and therefore also ‘newsworthy’) such as references to a diet, make up or fashion. In other words, the newspaper actively promotes for the reader to aspire to the celebrity’s look.” 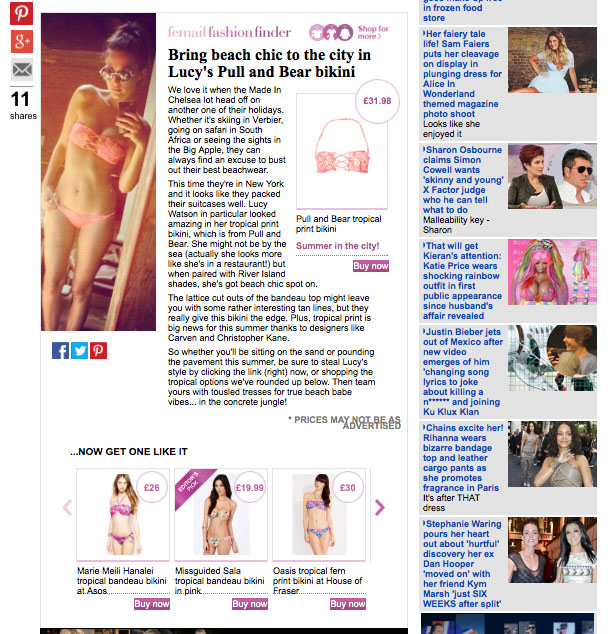 As with the Lucy Watson from ‘Made in Chelsea’ example above, the newspaper links to the clothing the celebrity is wearing…the make-up they’ve used…the food or drink they’re consuming. It must be said that the celebrity isn’t always uniformed of this process…they too are often involved in the “selfie” economy. Hand-in-hand. A triple win “selfie” situation right? Win for celebrity status boosting, win for brand boosting, win for press and media boosting. As Bohr states, “This economic relationship is important because it illustrates that the mainstream media, and the tabloid press in particular, has a vested financial interest in promoting the selfie as it equally promotes consumption of a large variety or other products. The indirect benefit to the online version of the newspaper is that celebrity news drives internet traffic, which, in turn, increases online ad revenues.”

Bohr goes on to discuss the psychoanalytical levels of the “selfie” making parallels to Jacques Lacan describing a child’s reflection in a mirror is their first step towards identification – ‘it typifies an essential libidinal relationship with the body image’, which can reference sexual allure performed via the body, narcissistic love of the self, the selfie as consumption. Therefore is the “selfie an object of consumption? The “selfie” as therapy?

“This performed consumption is, in fact, mirrored in the way that the photograph is taken and then shared on social media. Here, the act of taking a photograph is synonymous with the consumption that this photograph captured in the first place. The viewer, too, is implicated in this form of consumption as celebrity selfies are continuously promoted by the mainstream media. The selfie has created a giant feedback loop that is less concerned with the image of the self, or indeed the celebrity it represents, but actually, it relates to an insatiable debt-ridden consumer society hungry for the next image, the latest trend or the newest hype.” – Marco Bohr

A final perspective is given by artist Richard Prince who is re-using pictures – known as regrams – from Instagram for his latest conceptual artwork. He recently got banned from Instagram after sharing a photo of his controversial 1983 painting “Spiritual Americana.” He stated,

“Getting kicked off Instagram for posting Spiritual America was strange and confusing. I felt betrayed. I know there was nothing promised, but I felt cheated. I was happy sharing my work, my snaps, my pics. I enjoyed posting pictures of my own artwork and artworks by other artists. At times it felt like curating.” – Richard Prince

In the last few weeks since the end of May 2014, Prince has taken to printing out photos from other people’s feeds from Baywatch star Pamela Anderson and model Candice Swanepoel to Jeff Koons, rephotographing them, and then posting them to his own page – a physical #regram. A lot of work, yes, but it poses questions about the ownership of images and our physical relationship to the things on the screen.” – Richard Prince

As we know, the “selfie” isn’t just the OED definition, it isn’t just a photo of the “self”. It isn’t just a photo or image. It has agency and legacy. The “selfie” acts as power, as celebrity, as a mirror, as narcissism, as kudos, as social value, as identification, as therapy, as psychological understanding, as an avatar, as bravado, as the other self, as consumption, as an economy, as a brand, as an object, as a “giant feedback loop”, as curating, as conceptual art. It is also one thing that hasn’t been spoken about yet here…one thing that I see it as, the “selfie” as an archival tool, as documentation, as memory. For me, the “selfie” is a moment of self-reflection, through the highs and lows of life, through the adventure and journey, through periods of hard times and unexpected struggle (due to the recent events of surgery and recovery kingdoms), through moments of training and drive. The “selfie” is a reminder of how far I’ve come and what I’m capable of doing, achieving, and of being. For me, the “selfie” is also an opportunity for those people, friends and family, that are far away to see where I am and what I’m doing…AND it is an opportunity for me to be me and see that side of me, the side of me having confidence to face and see myself to acknowledge myself. It is ME. Narcissistic? Not in my eyes (though no doubt in the eyes of others). And just in case you wanted to follow those “selfie” moments talked about here on Instagram…surprisingly Bohr isn’t on Instagram.