And so the “architectures of change” (as I call it) in China continues…this time trying to scale new heights. Less than a year after construction was halted on the 838-metre tower in Changsha in central China, which was to be the worlds tallest building, Chetwoods Architects have revealed plans to build an even bigger structure – Phoenix Towers in Wuhan, Hubai Province central China.

At one kilometre (0.6 miles) high, the largest of the two Phoenix Towers will be the tallest in the world if completed on schedule in 2017/2018. As the images show below, the towers will be eco-friendly, futuristically and psychedelically designed  and, apparently, pink…yes pink of all colours – “They reflect the spectacular colours of the sunsets in the region.” The design is inspired by dualism in Chinese culture – the traditional Chinese phoenix symbol of the two birds, “Feng” and “Huang,” as well as the idea of yin and yang. Feng Huang, or phoenix, are a pair of mythical birds in Chinese culture traditionally used to denote royalty.

In terms of its environmentally friendly features, the towers are designed to have green features such as pollution-absorbing surfaces to filter the city’s air as well as technology to aerate and filter the water, in addition to thermal chimneys, suspended air gardens and biomass boilers for waste recycling. The towers are designed to be able to generate enough power to fulfil their own needs and those of neighbouring areas – “The Feng tower uses cutting-edge technology to ‘feed’ the Huang tower with renewable power in a symbiotic process”. Three large spheres will contain celestial-themed restaurants accessible via “skywalks” will be suspended between the two towers, representing “planets orbiting the Towers”. It will also randomly boast housing the world’s tallest kaleidoscope driven by a wind turbine. On ground level will be a commercial centre set to continue China’s current obsession with imitating global architectural styles from a French Avenue to a Japanese street, a Turkish corner and so on.

Designed to cover seven hectares of a 47-hectare site on an island in a lake, the largest of the towers will stand 172 meters (564 feet) taller than Burj Khalifa in Dubai. The project is still awaiting final approval from the government, but if all goes to plan it could get ahead of the Kingdom Tower in Jeddah, Saudi Arabia, which is also designed to top out at one kilometre to be built in 2019.

With a 2012 population of 9.7 million, Wuhan is located on the Yangtze River. It’s a major transportation hub that’s been called “the Chicago of China.”

“We were asked to create an iconic building for Wuhan, which embodied a strong environmental and social content as well as reflecting Chinese tradition.” – Chetwoods Architects 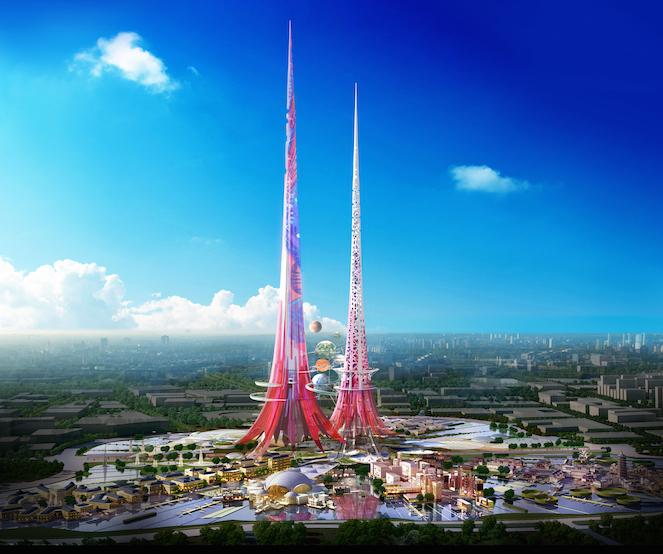 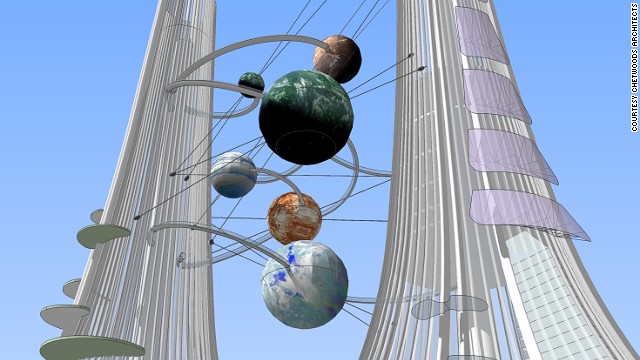