And so my posts of exhibitions of Chinese contemporary art on show in the UK continue…more exhibitions popping up all over the country…including a treat of an installation in a converted church in Yorkshire. Take a look and visit if you can!

Opening tonight is ‘Present Tense’ by JiaJia Wang at Hai Gallery, London. This exhibition of entirely new works by the artist, portray a supernatural, melancholic world using a variety of eclectic imagery borrowed from the disparate worlds of science fiction and traditional landscape painting. Hovering between abstraction, realism and landscape, the paintings present dystopian wastelands interrupted by neon lines and juxtaposed with mountains, rocks and streams. The Beijing-born artist moved to London at an early age before returning to his native China in 2009. He explores the notion of identity and the dilemma of ‘belonging’ in much of his work, further confronting this theme in his new works, grappling with a society in a state of flux and the changing values associated with a changed world.

“Fragments of life – faces and fractured houses – tease through the images hinting at displacement and “hang in the paintings like pathetic Super Mario scenery filler, comedic and tragic all at once, for them there is no escape; they are doomed to exist in a world in which they can neither move nor escape”.” – Jia Jia Wang

These strange new worlds, menacing and threatening in their outlook but affording momentary glimpses of light, fluctuate between distant past and sci-fi future and call into question what existing in the ‘Present Tense’ is all about; exploring not just what it means to live in the ‘now’, but also the tension that arises in the moment between past and future.

2. Ebb and Flow: A visual chronicle of the changes within Liverpool’s Chinatown, Open Eye Gallery, Liverpool
17 May – 22 June 2014 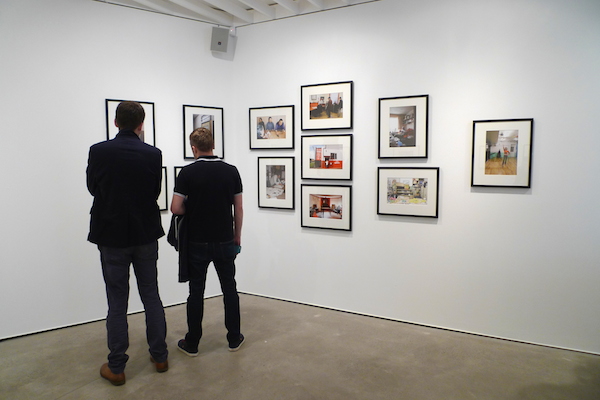 I recently blogged about this exhibition HERE. ‘Ebb and Flow’ is an audio, visual survey of the history and changes that have taken place within the oldest Chinese community in Europe, curated by Jill Carruthers. Drawing from the rich selection of photographic prints preserved in the Open Eye Gallery Archive, the show looks at the physical and architectural transformations of Liverpool’s Chinatown, as well as documenting the establishment and development of the local Chinese community.
3. ‘City DNA IV’ by Lu Xinjian, Hua Gallery, London
3 June – 20 October 2014

I recently blogged about the exhibition HERE. Lu combines his skills as an illustrator and a painter through using Google Earth satellite imagery – his “crucial artistic instrument” – to capture, from a bird’s-eye view, the structural landscape and essence of cities around the world, analysing their features and structures, before meticulously translating these illustrative images to large-scale canvases. He chooses colour patterns that fit each city, representing its culture, spirit or his personal impression of the place he has visited. They intricately create a complex relationship between shape and colour, abstraction and simplistic realism, structure and deconstruction, signs and symbols, making reference to the visual semiotics at play and each city’s  historic, economic and political contexts. He creates graphic compositions ‘of global metropolises whose structures are scattered into a concentration of fragmented lines’…as such maps, an archive of reflective of a personal memory of a city. 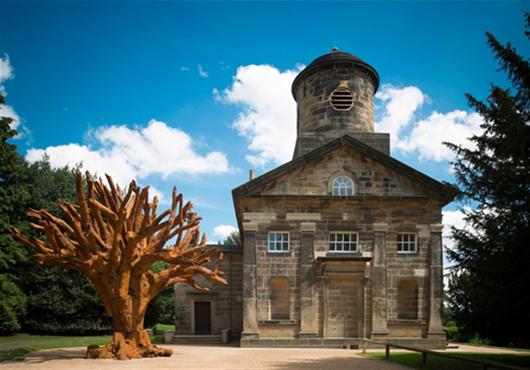 An exhibition by Ai Weiwei in the Park’s newly refurbished 18th century chapel. The project, the first by Ai Weiwei in a British public gallery since Sunflower Seeds at Tate Modern in 2010, is accompanied by poetry readings from the works of celebrated poet Ai Qing, Ai Weiwei’s father. Built in 1744 the chapel was used by those privileged to inhabit the Bretton Estate; it is now open for everyone as a contemplative space. This project enables a moment for pause and reflection on the capacity of the human spirit to create, even in adversity.