Tonight, after giving a lecture to Masters students at Christies Education, I went to see David Elliott’s lecture on ‘Exhibitions as Arguments: Frameworks for Thinking about Contemporary Art’ at the Courtauld Institute of Art, London. David is the Artistic Director of 4th Moscow International Biennale of Young Artists, Chairman of Triangle Arts Network/Gasworks, London, and Chairman of MOMENTUM, Berlin. He’s worked on numerous projects in and on China so I had to hear him speak about his curatorial ethos with a potential to include his perspectives in my PhD. He spoke honestly, with clear grounding, standing by his point of view.

In brief, the lecture analysed four large thematic exhibitions curated by David between 1998 and the present. Taking place in different cities and continents and examining from different perspectives the condition of contemporary art, these exhibitions extended a range of arguments about the past as a platform for the contemporary as well as the need for a broad, receptive and discriminating approach towards the idea of aesthetic quality and how this relates to contemporary experience and art. 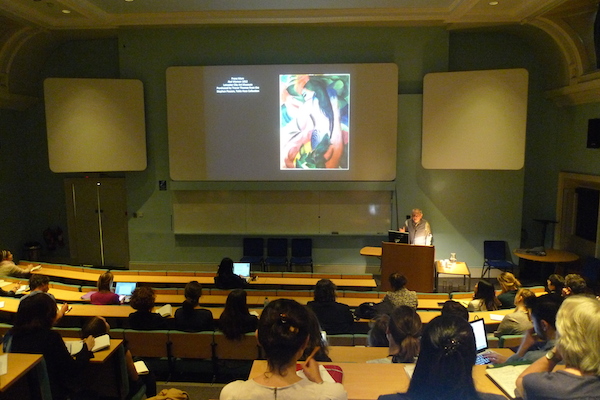 David began by presenting the work of Hans Hess saying it was the impetus for why he got into art into the 1960s where David’s practice today examines the exhibition of modern and contemporary art as propositions, and the relationships made between them…”the production and reception of art, they are never innocent of having a distinct set of values about art and to the world that it is part and may reflect…they are inevitably an argument…statements, juxtapositions and poetry interact with each other and the visitor. Places, cultures, histories are specific and are far from uniform…curators consciously or unconsciously work with difference reflective of their points of view. Should we accept there is only one framework for the display of contemporary art? Are there many? Is one more authoritative than another? How do we talk of the past to calibrate the present?”

He then presented case studies of his past curatorial practice beginning with ‘Wounds: Between Democracy and Redemption in Contemporary Art’ (1998) Moderna Museet, Stockholm, Sweden, where the curatorial framework aimed to examine modern and contemporary and how they relate to the present; showcase and critique the existing collection; indicate artists, works and concerns for the future programmes; create new ways of looking – though he stated “everyone says that when they curate a show”; probe the strengths and weaknesses of the building. Very much focussing on European enlightenment, he went on to examine artists’ works in details such as Jake and Dinos Chapman, Louise Bourgeois, Edvard Munch, Richard Billingham, Christian Boltanski, Rachel Whiteread, Victor Grippo, Vanessa Beecroft et al.

The second case study was ‘Happiness: A Survival Guide for Art and Life’ (2003) at the Mori Art Museum, Tokyo, and aimed to question the limits of contemporary art; question the idea of happiness; show classic works from East and West alongside contemporary art where contemporary art is not a ghetto; “begins in the world and ends in the universe”. The exhibition showed works by Superflex, Surasi Kusalwong ‘Happiness you Can Drink’, David Medalla, Choi Jeong Hua, Andy Warhol et al. Four cultures and areas of happiness were presented as thematics within the show – arcadia, nirvana, desire and harmony. Questions including – How colonial is a former colony?; How much is “good” art a song of survival?; Why is folk and indigenous art not regarded as contemporary art?; What is “good” in contemporary art?; questioned as to whether all knowledge can be brought together in an “innocular vision”.

Finally, he spoke of his work with the 17th Biennale of Sydney from 2008 to 2010 and the Kiev Biennale in 2012, the latter a dissection of the future by focussing on different ideas of quality are expressed through and art and what this signifies in terms of change. “There was a desperate need to get away from Soviet ideas…it was very much inventing ideas as you went along in line with its current history.” He stated that some artists repeatedly cropped up in his shows as he just simply liked their work. I got lost in the artworks here so didn’t write much as you can tell! So what next for David? He is currently in planning for the Moscow Biennale 2014 – ‘A Time for Dreams’ – based on the poetry and ideas of Martin Luther King, William Shakespeare and Karl Marx and more. 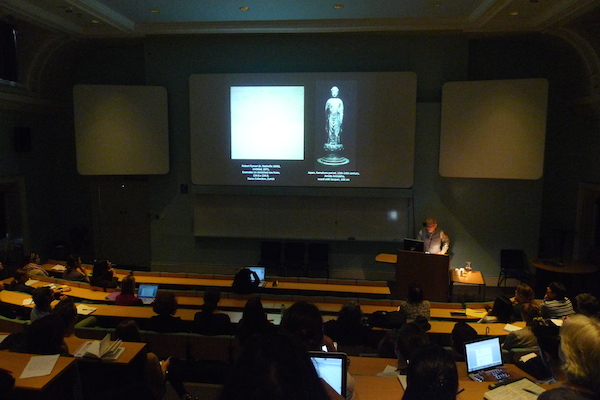 Q: What do you mean by ‘exhibitions as arguments’?

DE: They are arguments about what you think art is, its social, political and aesthetic role in society, what aesthetic standards does one use? Is one system better than another? Does one have predominance? When I was a student I was told there was only one or two discourses in the art world at any one time…all contemporary art is digested for you beforehand. There is a limited number of discourses….art is made all over the world in many cultures and situations and some of it is bound to be good…in other words this hierarchy, this dominant discourse when connected with the market (the elephant in the room) it becomes very pre-determining for what people look at and appreciate in terms of art. These are the kind of arguments being made. The meta-argument…really the end of the great narratives didn’t happen in the 1980s, because the same social, political and economic systems continued. It’s only in the past 10-15 years as power has shifted over the world, we’ve become globalised, and no one is sure where the money is. The question of value is the most important thing to be talking about now and is often reduced when in relation to the art market. The museums have coped out of talking about this in the contemporary. Without it there is no reference. Really the question is, is it any good? If it was “modern” it had to be good, in that club. We are living in such a different world now and I hope it came through in my examples.

Q: Why are you so keen on using the term “argument” at all? As it implies validity and objective standpoints…

DE: I don’t see it as a problem. I think you can have an argument from a subjective point of view. The way in how art has gone is so much more discursive, we no longer think or write about them as hermetic objects. Despite the intention of the artist, when it is out there it begins and if the art is any good there is more to it than the artist realises. This is the same for curating, if there is more that comes through.

Q: How do you ignore the political decisions that drive curating?

DE: The connoisseurship of contemporary art…what ones talking about is not just the eye or formalism, you are not just looking at the thing itself, it is the set of different relations, social, political, economic, in art itself. It’s not that art is instrumental…it’s actually there as a starting, as a prop. That’s what is really interesting about exhibitions and contemporary art and where it is going, it is an open-ended discourse that is rolling over, constantly shifting with conversation going on all the time.

Q: Is the process of design important?

DE: The texts and meta-texts within the catalogues have their own identity. The book becomes a very important thing in itself, an embellishment and key to the exhibition. A lot should come from that juxtaposition. It can’t all come from the exhibition and you can’t assume that you’re all coming from the same base of knowledge.

Q: Has the internet changed things?

DE: Not consciously. It has speeded things up, but books are so important…the smell of paper, the act of going through it.

David Elliott is a curator and writer who has directed contemporary art museums and related institutions in Oxford, Stockholm, Tokyo, Istanbul, Sydney and Kiev. He is currently Artistic Director of A Time for Dreams, the IV International Biennale of Young Art, to open in Moscow in June 2014, co-curator of PANDAMONIUM: New Media Art from Shanghai (on show in Berlin at present), and associate curator of the Hors Piste Film Festival in Tokyo. He is also working on two travelling exhibitions for the UK and USA and on a book Art and Trousers: Tradition and Modernity in Contemporary Asian Art to be published in 2015.

He was President of CIMAM (the International Committee of ICOM for museums of modern and contemporary art) from 1998 to 2004, and is currently President of the Board of Triangle Art Network/Gasworks in London, Chairman of MOMENTUM in Berlin, a member of the Asia Advisory Board of the Guggenheim Museum, New York, and a Visiting Professor in Curatorship at the Chinese University in Hong Kong.

A specialist in Soviet and Russian avant-garde, as well as in modern and contemporary Asian art, he has published widely in these fields as well as on many other aspects of contemporary art. In 2008-10 he was Artistic Director of the 17th Biennale of Sydney and in 2011-12 directed the inaugural International Biennale of Contemporary Art in Kiev, Ukraine.  He has also advised the Hong Kong Jockey Club Charitable Trust on the development of the Central Police Station heritage site into a centre for contemporary art.