I’m officially back to work now even though recovery kingdom continues…as in back working for the Centre for Chinese Contemporary Art (CFCCA), albeit remotely one-day a week whilst I’m finishing my PhD, but it does mean I’m returning to the world of research, seminars, talks, symposia, conferences…getting back into the frenetic pace of things nearly at full Rachel speed. I’m getting there.

The past three days have been spent in London between a private seminar (and follow-up chat in the V&A cafe) at Tate Modern with Carol Yinghua Lu and Liu Ding (and a powerhouse of East Asian art minds); at an immersive-interactive-performative event, Punchdrunk’s ‘The Drowned Man’ with the National Theatre (read about that experience here), within the former postal-mail sorting office by Paddington Station, and at the V&A Museum seeing, listening, viewing, critiquing Chinese painting from 700 to now at a two-day conference. I’ll talk about the latter here…

The two-day conference ‘The Making of Chinese Painting: 700 to the present’ was, in part, a little out of my research comfort zone, more grounded within traditional Chinese art history with very much less of a “to present” focus – this should have been made more explicit. The second day provided theories that were applicable to more contemporary ways of seeing although still tangible. I always see these events as opportunities to build further contextual knowledge as it’s important to know the contexts from which Chinese contemporary art has developed. It’s also, and as always, a chance to network and expand my professional family…connect even more dots as such. I won’t mention all speakers from the event (a full line up can be seen here) but just those that I think are relevant to my knowledge base and current research…so here’s a few perspectives from the two-days.

Nixi Cura, Director of the Arts of China course at Christie’s Education, was presenting on the first day…a colleague in my field of research. She spoke of ‘Paintings in Paintings’…adornments to pre-existing Chinese calligraphic texts, the incorporation of book elements into Chinese painting, how intra-textuality and intra-visuality operates in a Chinese context, how para-texts shape interpretation of the primary text, paintings are read in similar ways to texts where the editor of the text becomes the architect of the framework, “para-text is not to look nice but to ensure for the text a destiny in line with the author’s purpose”. She is at a preliminary stage of her research that is being hampered by publications of paintings not showing colophons or publishing para-texts and para-visuals Paintings in paintings with colophons are an 18th Century development. Images speaking to other images, we don’t know what they are speaking or what their languages are, but are we digging too much? It’s hard to piece together meaning…pictures as analog and text as digital, but text too can be slippery.

The keynote speaker for the second day was renowned Chinese writer and critic Wu Hung who spoke on “Silk Hanging Paintings” of the Tang. He spoke of a historical chronology, specifically the 720s to 730s period, with textual and pictorial references throughout, saying that “guafu” (a termed coined by Wu Hung) – hanging painting – is different to “guazhou” – hanging scroll. He stated his opinion of “guafu” was based on:

He questions whether there are pictorial or archeological evidences to support this textual description citing the cultural relic ‘Sarcophagus from Jing Ling of Empress Zhenshun’ (Wu Huifei d.737), Pangliucun, Xi’an, Shaanxi. He stated they are not screens, they represent paintings where the frames represent textile or paper works of the same period, imitated in the mural…the connection between the poetry and the mural, and the style and content of the subject matter is vital. The material is “xiao”, raw silk, or in this case the wall. The brushwork and subtle coloration are associated with the refinement of the materials, of silk painting from the  720s and 730s. Here, instead of offering a generic perspective on landscape views, Wu believes it depicts the Kunlun mountain in reference to poetry by Liu Ao and Du Fu – “guafu”. His talk emphasised the importance of language, cultural exchange and interpretation and how painting is a visual language where the physicality of the object is as much about the content as the written word. 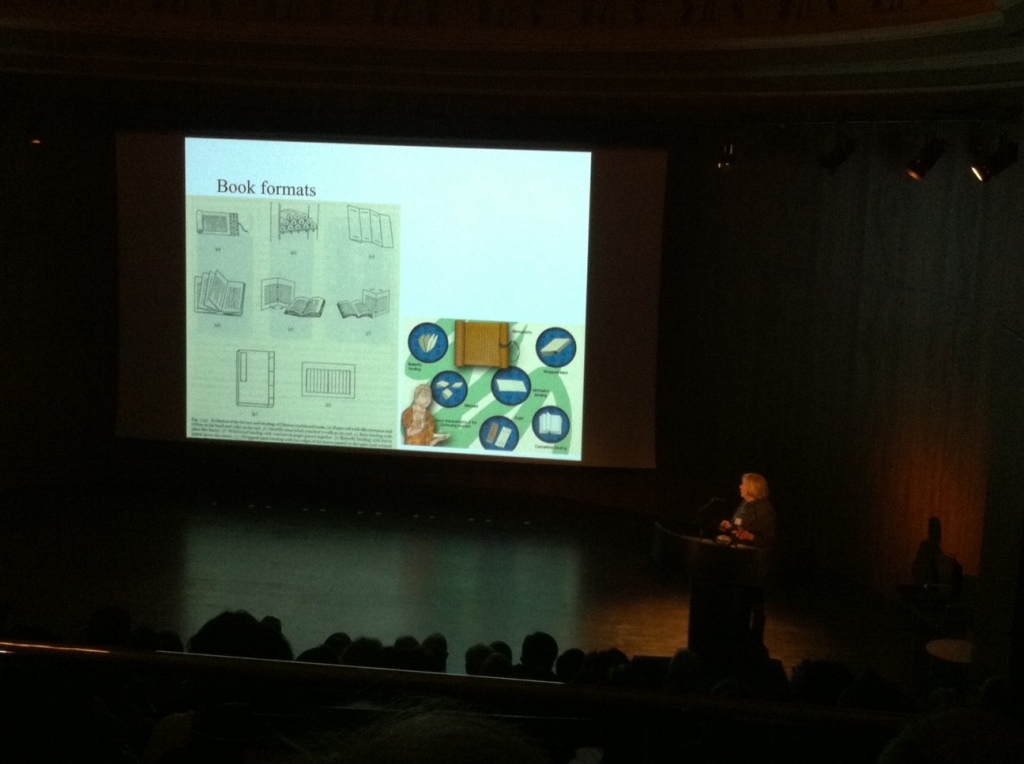 Following Wu Hung was Frances Wood…I simply love hearing her speak. I met Frances earlier in the year when I invited her to speak at the one-day symposium I organised, ‘From Print to Publishing’ The Changing Role of the Book in China and the UK’ at Centre for Chinese Contemporary Art (CFCCA). She is a truly inspiring person with a wealth of knowledge from her time working in China and at the British Library in everything publishing, books, book art and illusrtation…and such a beautiful storyteller too, so capivating. Her presentation – ‘Counter-intuitive: the Development of Book Formats and Their Relationship with Illustration in China’ – examined the importance of the relationships between the format of the object (in this case the book), and of the painting (in this case illustration). She began by looking at different styles of bookbinding from China (a huge smile across my face that this stage as I’m a bookbinder and book artist) onto the way in which we get from the format of the Chinese scroll to the characteristic book format that exists today from the Song dynasty through to today. She spoke of “whirlind” and “butterfly” binding techniques where the development of these formats in China and the choice of paper became very important. She stated how many analysis of paper is destructive as they take out fibres and paper tends to be made from a lot of different things so it’s almost impossible. How did China decide what paper to use for printing? The first known printed book is from Dunhuang, China, in 868 ad. They have no idea where the paper is from, the fibres are unevenly spread…and as Dunhuang is cut off from metropolitan China at that time it is hard to know where such materials came from. The production of illustration is not a scientific process – they are very careful considered and beautifully produced. This is how they also like to be and should be read, however in China, they want to see the information and read it as a scientific process. She references ‘Pipa ji’ from 1610 a record of the eight immortals, recto and verso placement of illustrations that break image reading, and butterfly binding as a short-lived format in Chinese bookbinding history. Throughout her presentation, she constantly refers back to the importance of xiànzhuāng shū 线装书 (bindings), questioning why did this triumph in terms of binding yet not accommodate the illustration? People often produce a book without thinking what the illustrations are about or who they are for – we need to consider the importance of the physicality of the object and how this affects interpretation. Something that any creative needs to consider as part of their practice.