Yesterday, I attended the one-day conference ‘Factory Assembly’, a gathering for UK-based creative industries organised by CidaCo, as part of the North Staffordshire Creative Industries Business Development Project. Whilst I’m back in the UK, I’m trying to engage as much with my local creative networks in the Staffordshire region, in addition to the national and international contemporary Chinese art network that are more directly associated with my research specialisms.

Keynote speaker for the morning session was the renowned independent British design company ‘Tatty Devine’ who create and manufacture jewellery in the UK. Co-Founders, Harriet Vine and Rosie Wolfenden, met  when studying Fine Art at Chelsea School of Art, London. Originally, their creative practice was based on the notion of “up-cycling”, using found bags of leathers and material to create jewellery, initially selling at markets including Camden and Portobello, at that time only earning £50 a day. Aged 21, they started to contact companies and magazines to learn the tools and vocabulary to progress, and the needed “fashion language”, gaining snowballing success through a high-profile photo shoot with Mario Testino in Vogue. From July to December 1999, they were selling to Whistles, Harvey Nichols and Urban Outfitters and realised they needed to stop working from their bedrooms, in January 2000, moving into their current premises to set up a studio and work space, gaining more and more public interest. In 2001, they gained funding for a research trip to New York, coming across the company Canal Plastics on Canal Street in New York. Seeing them use plastics, in all shapes and colours, on signs and for commercial use, became a driving inspiration for their work where at that time, flat plastic jewellery hadn’t really been seen or used as jewellery. When they got back to London, they started to work with an architectural model maker to cut out shapes for them, making works with diverse iconographic references.

‘Tatty Devine’ now has their own “archive of plastic” and managing to build their own language and aesthetic. As the fashion  scene moves so quickly, they wanted the works to have a life outside of the fashion seasons and work across different creative realms. Known for the name necklace, which developed from a simple Christmas gifts idea for around ten friends in 2002, it is now one of their best-selling products in the UK. Recently, they opened six new spaces in cities across the UK always showing an importance of manufacturing in the UK for it to have a specific quality to it that can’t be replicated on a mass scale. ‘Tatty Devine’ has a team spirit:

“We always remember why we do what we do and what we are doing it for…The shops must become an experience in themselves, for people to come into our world and be inspired by the things they see around them…We are celebrating the individual and give people the tools to be the person they want to be.” – Harriet and Rosie

‘Tatty Devine’ sit in the fashion section, yet work across so many cultural platforms including galleries across the UK and USA. They also collaborate with the spaces and other cultural producers. They are currently working on a project ‘Women With Something to Say’, collaborating with the publishers Faber & Faber. Each day for two weeks, a Faber author, poet or playwright take over the Tatty Devine blog to share their thoughts on what it means to be a woman in today’s society. Each of their posts will be accompanied by a specially commissioned Name Necklace or Speech Bubble Necklace created just for them. Another current collaboration is with papercut artist Rob Ryan, an old friend and now part of their creative community, in conjunction with a partnership with Selfridges.

They see the creation of a creative community as an integral part of their development and success, also the importance of teaching originality in creative courses in education, internships to pass on their knowledge and skills, and mentoring to other creatives and creative businesses. Social media is strategic and fundamental as part of their sales and business development…”it’s getting yourself out there and engaging in as many ways as possible.” They’ve been lucky to be 100% self-funded, creating a really strong brand and authenticity. Recently, they got involved with ‘Funding Circle’, which is crowd-lending rather than crowd funding and worth considering in today’s financial situation.

Following this session, was ‘Factory Shop’, a panel discussion between Marcus Warnes (COO, North Staffordshire Clinical Commissioning Group), Geoff Rowe (CEO of Big Difference Company and Director of Dave’s Leicester Comedy Festival), Melissa Nurcombe (Head of Marketing, Digital Life Sciences) and Hugh Evans (Programme Director for the Cross Economy Programme in North Staffordshire). External to the create industries in Staffordshire, and part of health, they were at the conference to provide an objective perspective and comparable set of perspectives and challenges which the creative industries can learn and borrow from and ultimately, work in collaboration. They discussed the importance of understanding and decoding the different languages, the vernaculars, used in the different industries in order to develop and work together, to communicate and engage with people, the public, your audience. They emphasised there is a huge open door for collaboration between health, wellbeing and care with the creative arts, not only for patients but for health workers and employees too, and that we no longer in a linear, analytical world. Collaboration is one of the key characteristics of this sector. The biggest difference between the NHS and the creative industries is that the NHS is one of the largest companies in the world, whereas the creative industries are made up of hundreds of small businesses. “It is about using the tools to make your working environment better – including social media – where Twitter, although a huge risk, allows for you to be understood and create understanding in these networks.”

“Having an open door mentality…an open mind is so important.” – Geoff Rowe

The second keynote before lunch was up-and-coming British designer Laura Wellington. Based in Leeds, she spoke of her career history, the success of her lighting product ‘HULA’ (that is shown below) and also the co-founding of Duke Studios with her business partner, boyfriend and photographer James Abbott Donnelly. ‘HULA’ is an exuberant pendant light, created by hand, where each piece of the pendant light is twisted and coiled to create the iconic HULA shape. Laura was featured in the BBC2 series ‘Britain’s Next Big Thing’ presented by Theo Paphitis, which charted her progress taking ‘HULA’ to the High Street, currently only sold by Habitat in the EU and from Laura direct. 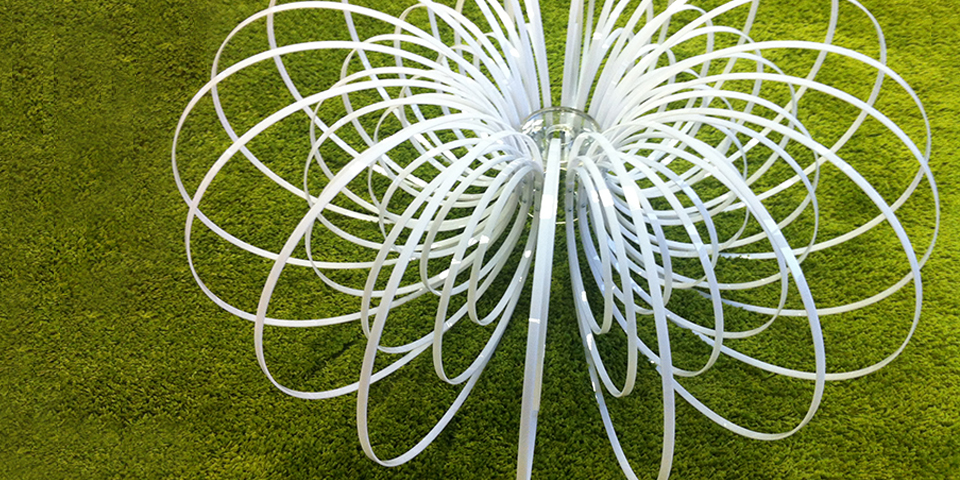 Established at the end of 2011, Duke Studios is a multi-disciplinary creative space in the heart of Leeds. An ambitious urban regeneration project, the 7,000 sq ft. space in Munro House overlooking Leeds bus station, which used to house Auto Trader’s offices, aims to highlight each and every great designer and company based in the North of the UK. The project is based on co-working, a revolutionary concept that provides freelancers and companies with an exciting alternative to the isolation of working from home or the inconvenience of travelling to out-of-town studios.

At Duke Studios, creatives can focus on creating in a supportive network of innovative thinkers who provide each other with a constant stream of inspiration. It is also a venue packed full of creative facilities with a focus on creative education – photography studio, workshop, co-networking space, laser and vinyl cutting and more. Their volunteers and interns are called Dukes and Duchess – they’re always trying to make fun of the creative hub that they’ve cultivated – and they’re about to introduce “mini dukes”, teenagers under 16 who want to gain experience in this industry. Laura’s talk gave an insight into setting up a creative business outside of London and that it is possible. They currently have 44 businesses in Duke Studios with 78 people with them now trying to look for a second space.

“We don’t do it to be profit-making, we do it so we can do the things we love.” – Laura Wellington

I sadly couldn’t stay for the afternoon workshop sessions, which I fear may have been more beneficial and directed towards the actual work that I do, however, I got names and email addresses to follow up and start conversations. It was, as usual, a place and event where I bumped into many familiar friends and faces who I’ve seen develop, creatively, in Staffordshire in recent years…well the last ten years or so. It’s interesting to see how we have each developed our niche in very different disciplines from craft makers to craft shop owners, hacker space developers to government creative strategists, graphic designers to well, me!

Some of the key strands coming from the day were that the creative industries need to look holistically at what exists in the way of tools and sites of work for our creatives in our towns and cities in the UK, and how we need to find ways of working collaboratively and in partnership with not only the creative industries, but other businesses that would benefit from learning from the creative realm. Furthermore, the morning’s speakers emphasised the importance of passion, love and drive for what you do; how honesty prevails and having your heart in the right place makes that difference – being you; how having a “story, that “story” as to how you came to be makes the audience embrace your talent more; how belief in making something happen, no matter how big, is half the battle; the value and power of social media in order to engage with your audiences and the importance of keeping up with online digital trends; how taking risks is integral to learning and business development,  and that money (or lack of funding) should never stop you. I have my own idea for something I want to set up in 2015, after PhD land, that will become, I hope, a global transcultural production initiative…obviously involving China…so watch this space. I’m always thinking, as you know, but now it’s nearly time to actually make things happen and take that risk. Only 60,000 words of PhD to go in 20 weeks…