So Manchester International Festival 2013 is in full swing…taking over the city in every way, shape and form…and in constructs you’d least expect it. The first thing I’ve seen is the evening performance of Massive Attack vs. Adam Curtis at Mayfield Depot, Fairfield Street, Manchester. I went with my good friend, Zoe Papiernik, who is Head of Marketing at The Lowry, and her partner, for the opening night. We didn’t really know what to expect as the trailer, as shown below, was pretty abstract…but at the same time, I’m glad it didn’t give much away as it was something else…something I’m still trying to decipher in my head. And get very vivid flashbacks from. If you know the work of Adam Curtis, he is memorable for his politicised, honest, dialogue-driven films that cut through society’s infrastructures like a hot knife through butter. For this performance he created ‘Everything is going according to plan’ (2013) alongside Massive Attack’s Robert Del Naja.

We arrived just before 9pm at the warehouse space complex, Mayfield Depot…a gutted, rough around the edges, in-progress space, that was to be consumed by the festival, not just for this performance but for other art installations too that I’m hoping to catch at the end of this week. The audience was funnelled into what can only be described as a holding area next to the bar and toilets…packed in like animals, waiting…waiting for what was about to happen. There’s actually reference in the “holding area” now thinking back…we are part of the masses waiting to feed, to consume. We could see huge screens and projectors in an enclosed area of the space that we assumed at some stage we’d get released into. The main performance space was created from three walls of projections with a main stage set up at the front with intense surround sound that was inescapable. Here are some of my thoughts from the experience that I frantically tried to note and quote whilst being frozen in Curtis’s void of thought. 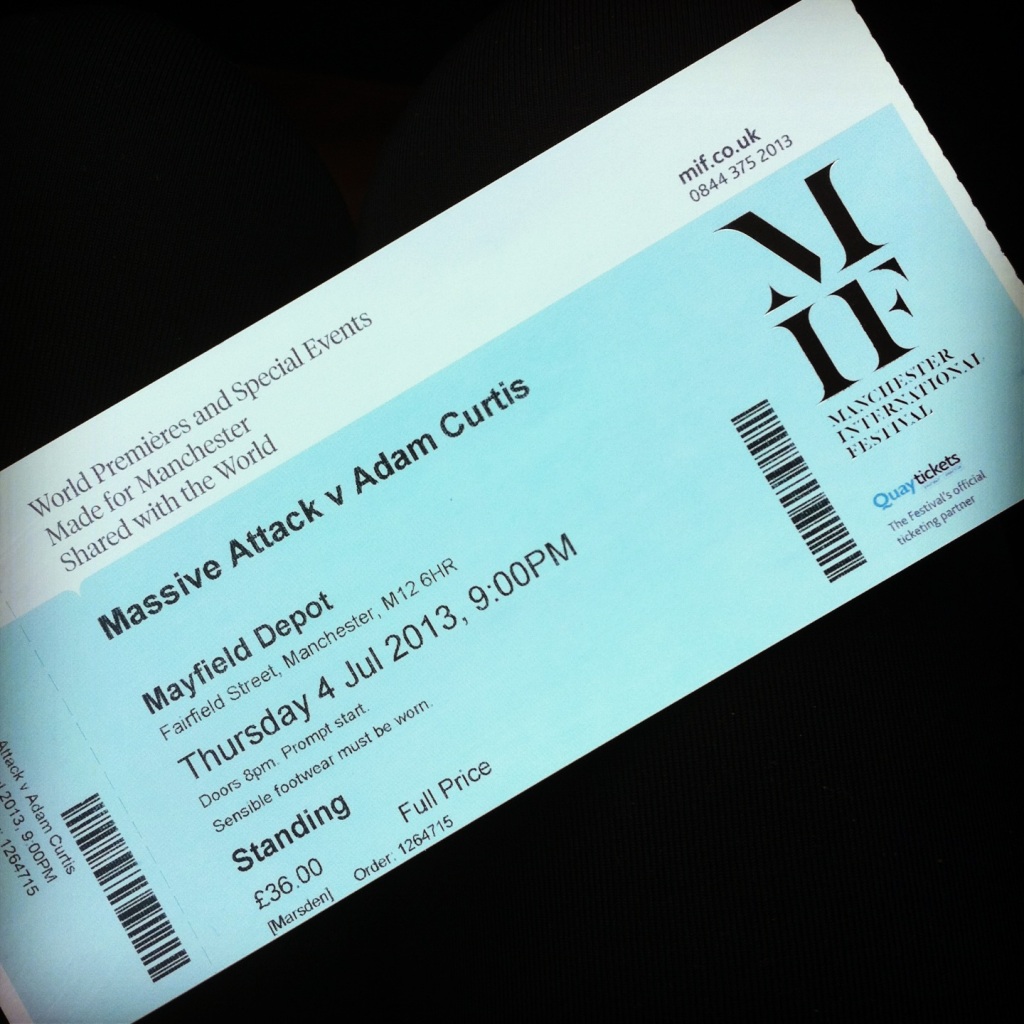 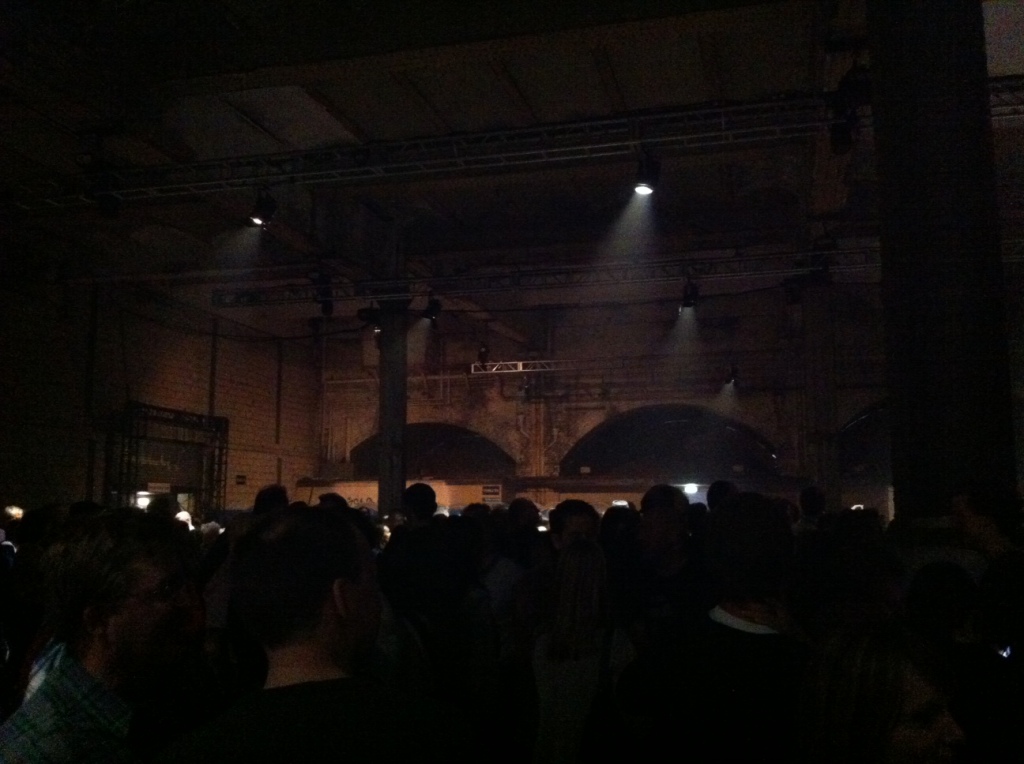 It opened with a dialogue introduction, creeping melodies from popular culture examining ideals of model cities as a way to eradicate violence, crime and disease. “You shouldn’t try to change the world, but to manage it, to keep everything and everyone in it safe…to anticipate dangers to the system and avoid risk, safe from harm…we are locked into a static and simplified world…controlled by the iron grip of ghosts of the past”. We exist in a bubble. Imprisoned. Ultimately questioning is there optimism for the future? The performance was broken down into acts beginning with ‘Tragedy’ (Act I), ‘Self-Sacrifice’ (Act II) and ‘Suicide’ (Act III)…at which point, your own mortality was laid bare on the table of your mind, as you questioned, what we’d as a society been brain-washed into doing, what we were responsible for causing and what power we actually have to make a change. Who was I REALLY? And how did I get here? No really, what’s happening. The fourth act was ‘Fallout’ (Act IV) focussing on war and nuclear weapons, the power of science discovery, predictions in games of chance, humans being a danger and threat to themselves even when trying to do good, the act of trying to anticipate dangers in the future to keep people safe from harm, the “risk society” captured by the West, and can the future be made predictable? A belief that it can. The next was ‘A new order’ (Act V) that jumped into media power structures from CNN to Jane Fonda’s body fascism, the multiplication and breeding of images in the public domain that have made ruins of the old world, the power of weapons and monetary global gain and how the world has turned inwards becoming greed, all-consuming. ‘The shape of things to come’ (Act VI) focussed on those who had the power to manipulate change such as Donald trump, the risk on the free market, free elections, free people, freedom itself. As if freedom actually exists? “He died from the equations used to make the electron bomb.” ‘The managed world’ (Act VII) spoke of the new world was unpredictable and chaotic, from war to TV to violence to racism…”alone in their rooms people turned themselves into their own fears…the chaos and anxiety was inside us…technocratic (a new work in Rachel’s vocabulary) vision of a managed world…as machines became more powerful so did the data, predicting the future in relation to our fears…we imagined what we feared and feared what we imagined…Prozac nation to manage the disorders…Brainwashing each other into being happy.” At this point most of us were silenced, reflecting, contemplating our experiences…trying to actually work out how it was going to conclude. It felt like we were going to be spat out back into the world, slightly angry, numb at the brutal honesty of what we’d just seen and heard. Lost. The final act ‘Lost souls’ (Act VIII) looked at those who couldn’t be managed or manage themselves, how people got nostalgic looking to the past and how the present, as said before, was absurd and chaotic. The brutal realism of how power structures dictate our lives. “Baby it’s you”…now it’s your world…the invention of own worlds, the Internet as an imaginary world, and the new world of faking.

In the final section of the performance, they presented an image of the Taliban and how they destroy all images of living things, which in my view…is this actually wrong? As it actually is a feasible construct for creating a purer reality, questioning ultimately is democracy a sham as part of our “managed democracy”. A series of moving images taken from Hollywood films showed actors and actresses pensively looking forth to the sky, running forward and pausing with a fear of what was about to happen next. They were played out from different eras and films, back-to-back creating parodies. Clips and scenes of the destruction of The White House and key New York iconic buildings were repeated over and over again. The Twin Towers and the fall of the economy…”needles detached from their contest of reality…The past-present-real-imaginery. “In this 2-D world the dead live among us. They still dance and in this uncanny the fake is as convincing as the real.” At one stage, the heavens literally opened in the space and black ticker tape fell from the skies as if it were a funeral “party”, a celebration of corruption and the powers that be, whilst images of the start of he Iraq war in 2003 were played on-screen. It was to celebrate the role of capitalism and the state party collapse that led to the collapse of the market economy in 2008. It felt so wrong yet somehow right. Let’s celebrate betrayal and corruption. The words “YOU WILL LOVE THIS” intensely flashed on-screen, over and over and over again…like punches to your psyche, reminding you of the media-image-subconscious-brainwashing powers as vibrating hard bass noise reverberation skipped across your skin. This is the message of the everyday media compacted together, delivered to your senses in one hefty bite. You had to literally eat the words. Or dream them as I did that night. At one point we thought the performance would end on this mortal hang of brutal realism, but they gave us the pinch of hope to let us feel that we’re not all destined for another live just lived.

“The future is full of possibilities.
You can make anything happen.
Now find your own way home.”

You weren’t allowed to take photographs (though Rachel being Rachel sneaked a few)…and we decided that it might have been to do with the fact that so many images, moving and static, were used, that rights for their use might not have been authorised. Such a wealth of documentary media sourced. Massive Attack were very much a soundtrack to this work…an undertone that oozed out in between acts, supporting acts, reinforcing statements and energies produced from the dialogues. Moments to get lost into another world. You could see that some people came expecting a rave, when it was the darkest most psychologically consuming rave I think I’ve ever been too. There were times that stopped me from breathing as content hit a real Rachel life experience nerve, and others where you laughed at the reality of how twisted global situations have become. Welcome to our “managed world”. Everyone was pretty much silenced from the performance…overwhelmed by the sheer level of information, knowledge, history, death, mortality, pop culture, war, politics, suicide, self-obsession, self-deprivation, text, play, theatre, violence, fiction, drama, fascism, racism, destruction, medicated life. This experience is going to stay with me for a while…stay with me through every moment…as I question, question today and this moment. Am I in control? 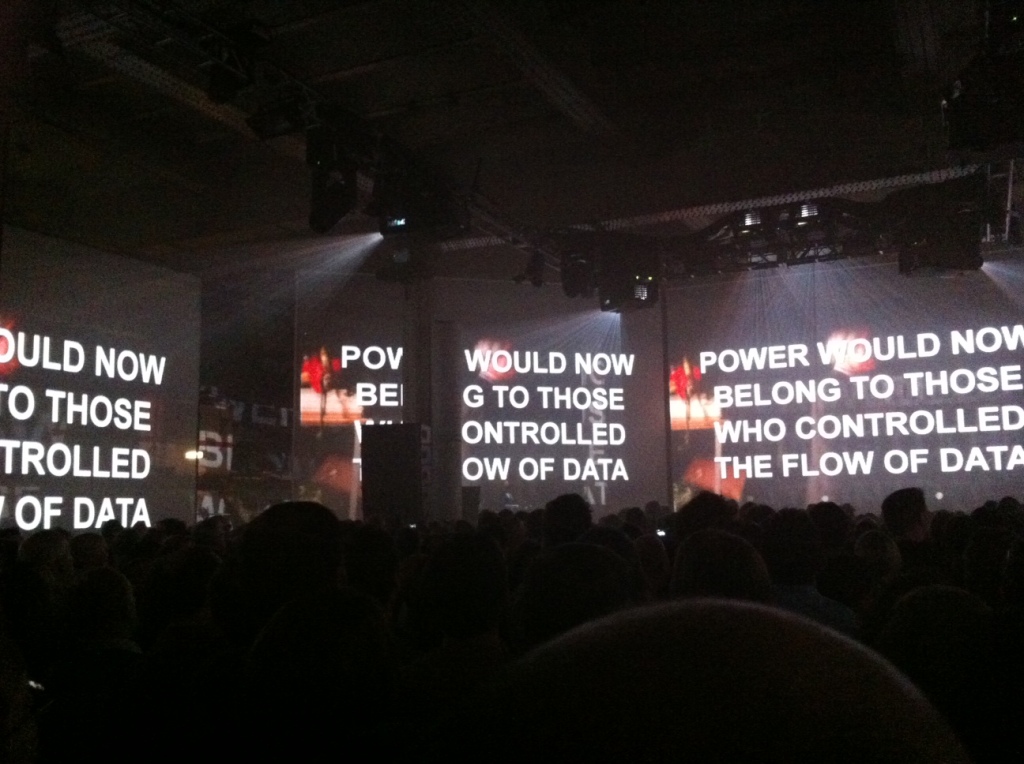