Today’s find was ‘Between the Lines’ (2007) by the American artist Ariana Boussard-Reifel…completed in 2007, it is a book facing race and erasing racism head on, a text on white supremacy completely eviscerated by the artist, word by word.

‘It is a white supremacist text that I cut every word out of. Essentially imposing the doctrine of RAHOWA, colour-based segregation, on the book itself, I removed all the black from the white, rendering it meaningless as a consequence. It was part of a series that was a response to the rise in power of The World Church of the Creator, a vitriolic white supremacist group. Beneath the surface of this simple piece are layers of meaning. Superficially it is a cheaply printed paperback with the words removed.  But with the additional knowledge that this book is a white supremacist bible and the words viciously and exactly describe the necessity of racial segregation, it becomes a quite plea for unification, speaking to the need for contrast and diversity. 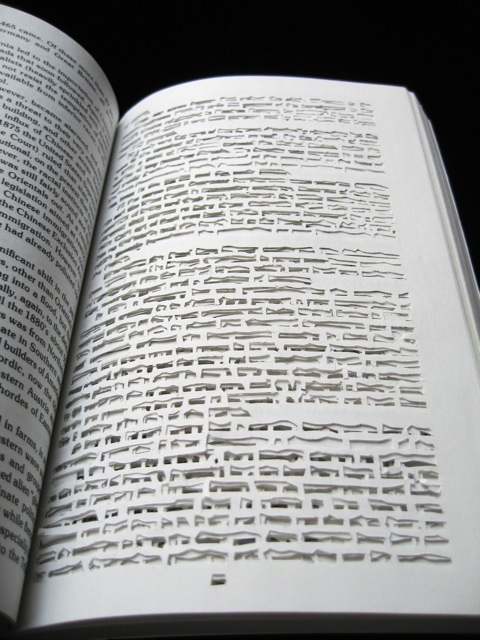 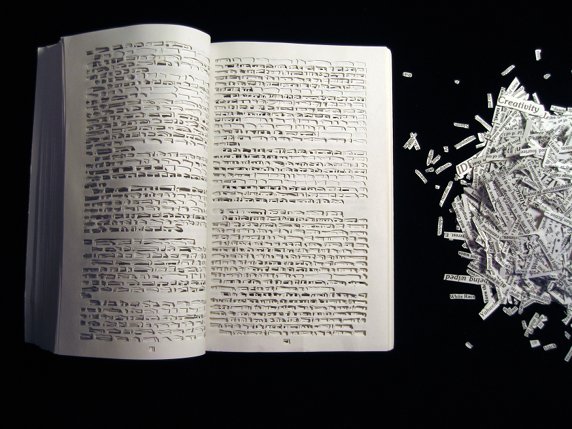 The making of this piece was, as you can imagine, simple but intense.  It took a year of nearly daily sessions cutting out each word with a knife.  I saved the words and present them alongside the book to act as a trace of the making as well as to note the contrast in color and purpose.  This process for me became a meditation and an act of dedication to dismantling these hateful thoughts.  The end result is a work, quietly beautiful, reminiscent of old-world lace work and ancient languages.  Its meaning is found in its absences and its voids as much as in what remains.’ 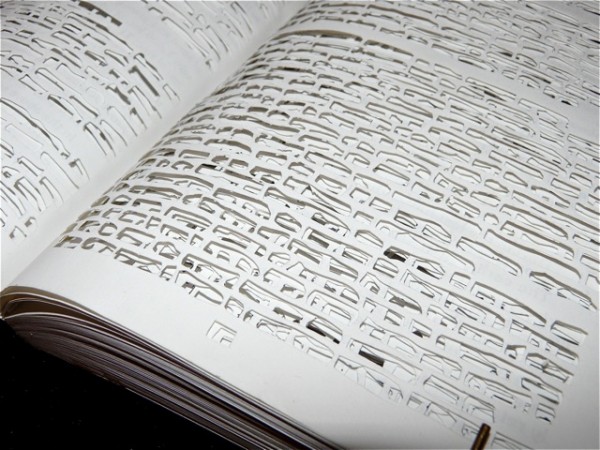 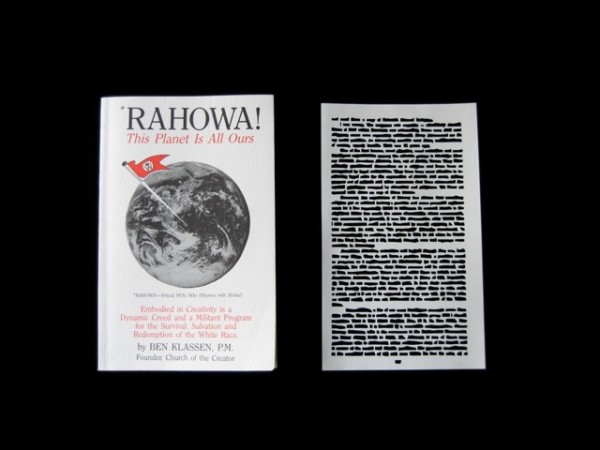 I have always had an interest in obsessive, ritualistic, performative art practices, especially in relation to text, language, books, words and my own artistic practice. There is some cathartic about these actions…emotionally binding too. This clever and articulate piece of book arts holds within its pages such a powerful message regarding how our view of race needs to change, and presents in such a simple visual way, how this can happen. I want to stare at the pages’ skeletal frameworks, question what words once existed and what words should take their place.

This piece immediately reminded me of the performance ‘Tropos’ (1993-4) by Ann Hamilton…one of my favourite performative book works out there that I’ve cited many times. ‘There is a solitary figure seated at a small metal desk in the center of the space. An acrid odour of smoke and burning permeated the air. Its source became evident as viewers came closer to the seated figure. As the attendant read a book, she burned away the printed text line by line. The figure remained absorbed in this task, ritualistic in its deliberateness. Over the duration of the piece, the text – transformed into smoke – became absorbed as smell into the horsehair that covered the entire floor.’

What would life be like without words? I live by them every day.