Since I’ve been back in the UK, I have tried to go swimming nearly every day for around 45 minutes, and to go before 9am as it definitely puts me in a more productive and peaceful state of mind, ready for the day ahead. 44 lengths (1.1km) last time. I’m trying to get to 50 (1.25km) before I leave for Shanghai, which is only two days away. We’ll see if that happens today.

Last Wednesday morning, when I arrived at the pool at 8.15am, it was, in a word, bedlam…where had all these people come from?! I couldn’t help but think that the London 2012 Olympics and the “motivational aftermath effect”on the UK, as I’m calling it, was to blame. It made me somewhat frustrated as usually it is pretty serene at that early hour, with a close-knit and familiar group of adult swimmers of all ages. There’s a certain dynamic with the group that’s for sure. I chatted to an older Malaysian chap that day who had lived in Stafford for over 40 years. He thought I was Portuguese…or Spanish or Italian…from that area he said…I had “that look” about me, whatever that means. I get that quite often to be honest with my dark hair and dark eyes. I wish I was more “exotic” in some respects but I’m 100% English. We chatted about our engagements with Asia…he, how he’d not actually travelled around Asia that much, only within Malaysia, the borders of Thailand and Singapore…he wondered why I was in Shanghai and what I was doing there and what my views were on the younger Asian generation. He spoke of the conflicts and tensions between China, Korea and Japan and how he feels those political preoccupations and points of view still reside in youth culture, even though it’s not perhaps discussed or visually prevalent. This was a pretty poignant conversation actually, considering the current political uprisings that are starting to appear between China and Japan over an island’s identity and territory. Quite a heavy conversation for before 9am, but fantastic none the less. He swims every morning, so no doubt we’ll chat again. I’m looking forward to it as I’ve missed that kind of international critical engagement on a daily basis since being back in the UK.

Finally, it is time to fill you in on the UK London 2012 Olympics experience…and what an intense couple of weeks it has been. I felt, in part, mentally exhausted afterwards. Who didn’t? Originally, I was not supposed to be in the UK when it was happening, so it was a really nice surprise…more so as my brother managed to get me two tickets to the Olympic Park for a day adventure. I went with photographer Phillip Reed and we were both just a little too excited to see what it had to offer. Some photographs in this post are by him, as credited. I’ve included a few of my own too, and a video, just so you can (hopefully) get a real sense of the entire (overwhelming) experience, that, by the end of the day, left me unable to articulate myself properly, most likely out of sheer tiredness and over-visual stimulation. It was a day with a compulsory positive commentary, however, a pinch of negativity and cynicism did creep in by the time the closing ceremony kicked in last weekend.

We arrived at the park from the West Ham tube stop, and far too early, so slowly wandered from West Ham through the back streets of London, on the way seeing the BBC temporary newsroom premises like a UFO had landed on the top of a council house block, up to the chaos of Stratford and Westfield shopping centre to meet a friend for a cup of tea before our 4pm ticket entrance. ‘Games Makers’, the Olympic volunteers, were everywhere armed with megaphone speakers, providing direction and commentary, with crazed and infectious happiness. They would be standing on the streets or sitting on lifeguard-type raised seating, singing, chanting, shouting. I managed to see a friend who is Brand and Marketing Manager for International Inspiration for London 2012 (it was actually her 30th birthday that day too!) who said that on her way into the park for work one morning she heard a familiar voice from one of the megaphone speakers and realised it was comedian Eddie Izzard! Nice touch, and I’d like to think that more celebrities got involved like this. The volunteers really were key in building atmosphere, acting as Olympic ambassadors. I just wish all volunteers in the UK, not just for the Olympics, were more credited for the work they do. Whilst sitting down drinking a great cup of fresh ginger and cinnamon tea in Westfield, Phillip noticed Head Coach for Team GB, Charles van Commenee, on the adjacent table. We all started to secretly listen to the conversation he was having with official Olympic colleagues, for him to come out with the phrase below that has definitely become the phrase for 2012 as I move towards my 30th year. I wonder if he said this to the athletes?

“Success is in the journey, not the destination” – Charles van Commenee

The day was spent meandering through the park trying to take in every design, architectural and sporting facet whilst catching some of the events on the big screen, including Victoria Pendleton getting disqualified and Chris Hoy winning gold, seeing a rainbow, eating pie and mash with pints (as I’ve said before, since when does Pimms get served in pints?!), and listening in to people’s Olympic conversations and shared positivity.

One extra surprise for the day was experiencing ‘The Orbit’ and FOR FREE…I couldn’t believe it! Tickets were impossible to get hold of from the London 2012 ticketing website and expensive at £15 a pop. How it happened? Well Phillip and I walked to get a closer look at the statue-esque tower, which stands twice as tall as the Olympic stadium at 115 metres, and I noticed the copper coloured cone-like structure that sits upturned at the base of its interior realising I’d actually worked on this during my days at the Solomon R. Guggenheim Museum in 2008 as it is part of his ‘Memory’ works. I simply had to photograph it so asked one of the volunteers if i could go in past the barriers even though i didn’t have a ticket. He then asked if we had tickets for another day or if we were coming back at any stage and I said “no”. He turned around taking a look over his shoulder, seeing there was no queue and very kindly waved us through to go up! So I have to say a big thank you to him, sadly I have no name to go on. I was seriously overwhelmed from that point on, speechless in part as I took in the phenomenal views of the Olympic Park and London from up there as it went from day to night, dusk to evening splendour, as the lights came out to play in force. I swear the Shanghai to UK transition also had a part to play in my being overwhelmed.

“I wanted the sensation of instability, something that was continually in movement. Traditionally a tower is pyramidal in structure, but we have done quite the opposite, we have a flowing, coiling form that changes as you walk around it…It is an object that cannot be perceived as having a singular image, from any one perspective. You need to journey round the object, and through it. Like a Tower of Babel, it requires real participation from the public.” — Anish Kapoor 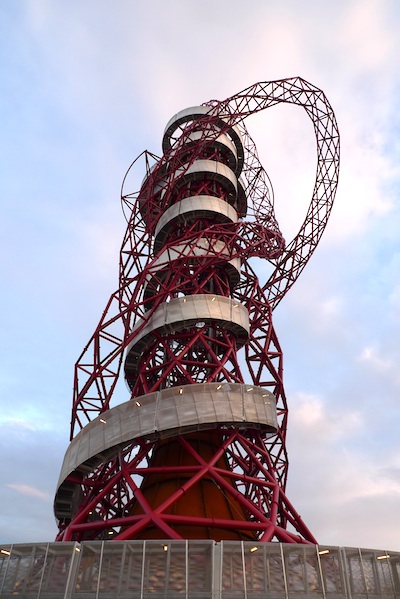 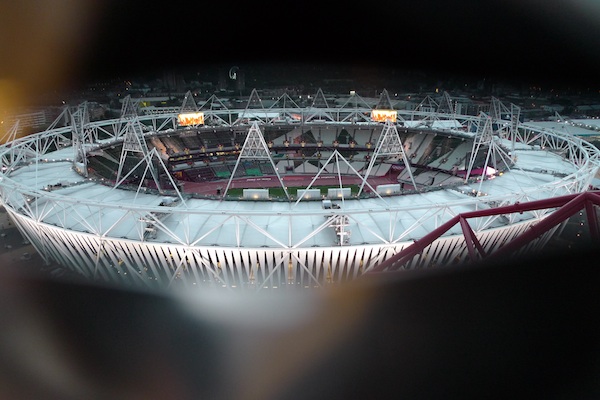 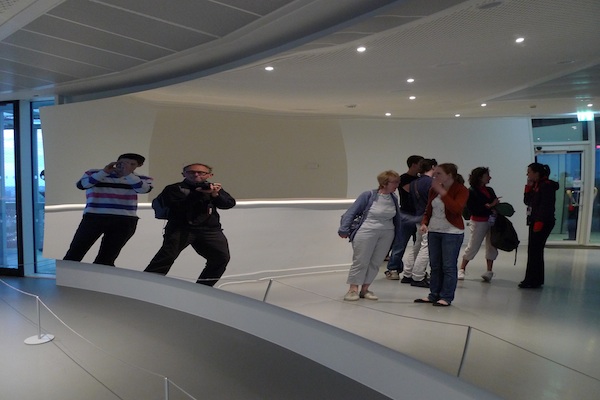 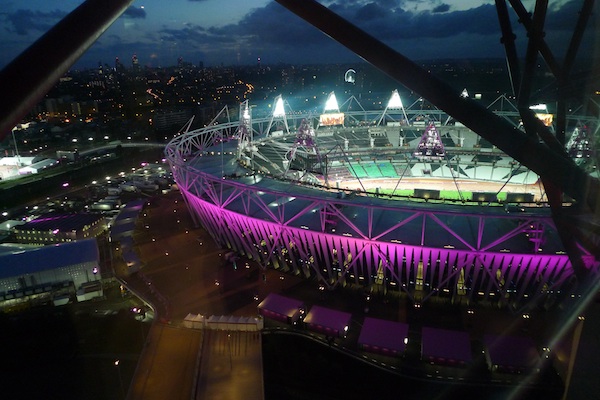 In conjunction with London 2012 Olympics there has been an incredible amount of art and cultural programming across the UK and in the Olympic Park itself. A few works that stood out as part of ‘Art in the Park’ included: 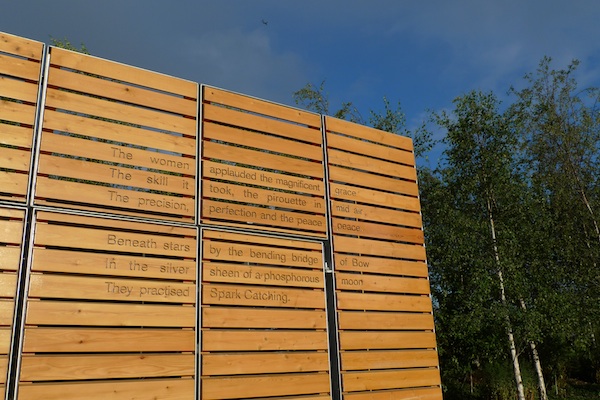 There are four articles I’d also like to cite in this post that have provide diverse, interesting contextual reference and discussion points during in and after the Olympics: 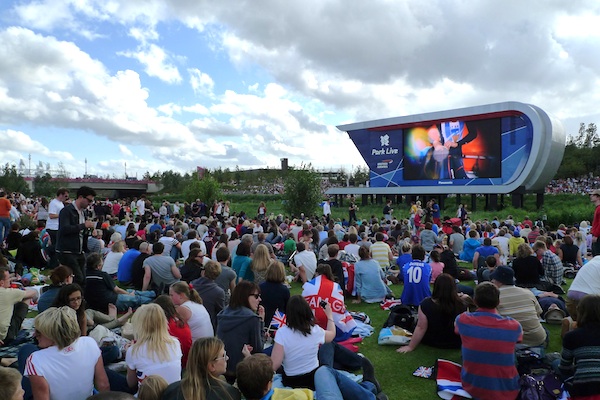 It’s funny how quickly people jump on board with something if they see it doing well. The Olympics definitely became a form of mass popular culture, instilling a (false) sense of happiness amongst the UK and international audiences that quickly waned as soon as the poor creative effort of the closing ceremony began bringing back the well-known UK cynicism on the rest of the world. No one ever really questioned that happiness either until it is all over, or question why they wanted to watch the Olympics or the athletic and sporting success of others. Twitter was having a field day that night, as was I as I got frustrated with the horror show that unfolded on TV. This is what I thought the opening ceremony would be (thank you Danny Boyle for making the opening ceremony truly amazing and something to be proud of)…and I even discovered that Damien Hirst had a part to play in all this, designing the Union Jack flag layout of the set. I don’t really need to say anything else about that.

Negativity re-emerged and for the few days afterwards, I began to question the whole Olympic experience, eventually coming to the conclusion that any positive outcome from it all has to be good. I just wish people understood the premise of  their experience sometimes. “Inspire a generation” – I’d like to think so, and it definitely has…”Inspire an exercise fad amongst the masses” – more likely. There are so many new cyclists on the streets and as I’ve mentioned, swimmers at the pool. I wonder how many road bikes, exercise equipment and clothing will be left to gather dust in about 6 months time? For sale on eBay. In fact, my friend Hannah is kindly giving me her road bike for free, but that’s definitely not a fad or even inspired by the Olympics. You already know that riding the streets is in my soul. I can’t wait to use it later on in the year. Until then, I tread concrete, swim and point with ballet feet…I’ve just remembered I have to go back to Shanghai and do this in 30 degree plus humidity…then it will feel like an Olympic sport. Shanghai in t-minus 2 days.