Last month when I was flying back from Shenzhen to Shanghai, my flight was delayed for over 4 hours. (I still need to tell you all about that chaotic trip.) I was tired, a pinch Hong Kong art fair VIP party hungover, very restless and needless to say just wanted to sleep. Sods law I was sat next to the only Chinese guy on the plane who happened to have lived in Sweden for a few years so he had more than great English language skills that he just had…just had to practice…with me. Me being Rachel and polite engaged in this dialogue for what was probably far too long. The world was testing me that day. Anyway, as chatting, this guy said that “70% of all internal flight are delayed in China”…quite an unsubstantiated  fact that I have recalled to many, many people here in Shanghai, including to friend Jonathon Lim, a creative/photographer/film-maker/skater/traveller et al. 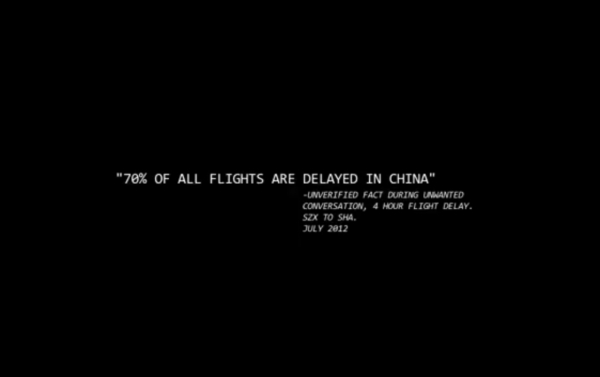 Today, he made the skate video ‘SXF-SHA’ of his recent trip to Shenzhen and HK with skater Kristian Kvam Hansen naming it after (my) “your words”. Nice touch. This video makes you realise the freedom and instinct that goes with skating…mmmm…and takes me back to my teenage years and early twenties when it was a big part of my life….sitting in concrete jungles and UK skate parks…watching, learning, whilst occasionally brutally injuring myself…the smell of those places…and the sound of skating, that sound is pretty comforting. Yes guys, I have secret skate knowledge. Unexpected? Recently, I’ve been getting to know quite a few people from the skate scene here in Shanghai. They are literally from all corners of the globe and I get the sense that they are some of the best of the best, they are super impressive to say the least…no one is just average somehow. They are here for a reason, many pro and many sponsored…but that seems like it applies to a lot of industries and people here. We’re here because we’re good at something or are at least trying very damn hard.