I started today with the TED talk ‘A giant bubble for debate’ by architect Liz Diller from her firm DILLER SCOFIDIO + RENFRO (DS+R). She speaks of the divide between private and public spaces and how as architects they are less attuned to the nuances of the public. This is something that has come up in many conversations recently with architects and other creative friends lately in Shanghai…that architects need to consider the relationships that take place inside art galleries and museums…how do we build art galleries and museums for the public as architects? How do we move beyond the white cube, the salon, the shopping mall, the warehouse space, the historically restored constructs that are currently being used and re-interpreted as art galleries and museums? As ultimately, in my view, unconventional spaces help to manifest creativity as you are forced you to think, create, work, curate, construct outside expected spatial parameters, thus helping to drive new contemporary art practice and historical discourse. Liz questions, what translates generic public space into qualitative public space?

She stated that her firm have been eating, drinking, thinking, living public space in order to understand this,

“…to truly make a good public space you have to erase the distinctions between urbanism, architecture, landscape, media design and so on…it goes beyond distinction.” – Liz Diller

She goes on to talk about the intended addition to the Hirshhorn Museum in Washington, DC, and how this museum is situated on the iconic National Mall, a symbol of American democracy, a space to voice discontent, to show power…the greatest civic stage in the USA synonymous with free speech. She stated a huge discontent and disconnect between the communicative and discursive space of the Mall and the museums that line it either sides. ‘Museums usually have passive relationships between the museum as presenter and the audience as receiver of information…you’re being talked to.’ She went on to question, is it possible for art to insert itself into the dialogue of national and world affairs? And could the museum be an agent of cultural diplomacy by harnessing intellectual and global energy into and through the museum? Spaces should be a public forum for discourse around arts, culture, politics and policy with global reach and interdisciplinary nature with informality of Times Square.

Liz decided the Hirshhorn Museum needed a temporary deployable structure to work within the concrete “doughnut”, within the museums cylindrical courtyard. The museum has been described as “hulking”, “silent”, “arrogant”…it’s a design challenge with one redeeming feature that its lifted from the ground and with a hollow centre. When opened in the 1970s it was called “neo-penitentiary modern” and a “maimed mall”. I like these descriptions. Brutal as ever. Liz asked how does and can it expand four decades later? How can we use the hole? And what language would it take? If one inhabits that space what is the material of the Mall? It has to be ephemeral, formless and free…at which point she shows a video of one of her colleagues blowing up a giant airbag that takes the shape of its container…’it is inhaling the democratic air of the mall, coming into itself’. 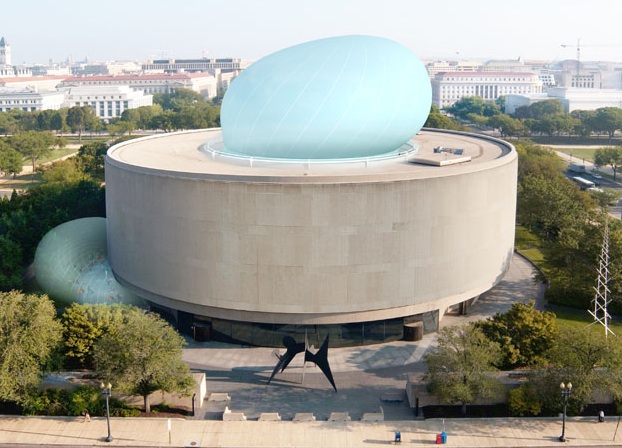 Dubbed as “the bubble” by the press, and now called the “Bubble” on their website, it is a 153 feet tall inflatable event space made from silicon coated glass fibre creating 14,000 square feet of space for 600 to 1000 people. It is known as “architecture of air”. Could this be a new terminology within architectural historical discourse? Perhaps…although questionable…I’ve not heard of many of these constructs so it could definitely be a new realm of academic and conceptual expansion. ‘It is a combination of iconoclasm and adoration…flexible and reconfigurable…cultural dialogue and diplomacy…form and content.’ It is an “anti-monument” placed within monumentalism…’the ideals of participatory democracy are represented through suppleness not rigidity, art and politics occupy an ambiguous site outside the museum walls but inside the museums core blending its air with the democratic air of the mall.’ It will inflate for the first time at the end of 2013, and I hope I get to see it…another place to see during my 30th year…and I will be in the US at some stage in 2013.

This project reminded me of the Serpentine Gallery Pavilion…the annually commissioned architectural series every Summer in Kensington Gardens in London, UK. They examine and tackle very similar notions as regards the interplay of public spaces and the creative realm, again creating a flexible-use event space. This year Herzog & de Meuron and contemporary Chinese artist Ai Weiwei will create the twelfth commission, the world’s first and most ambitious architectural programme of its kind. I’ve just realised I will get to see this when I am back in the UK in June. Can’t wait. I love hanging out here in the Summer months. The Pavilion will take visitors beneath the Serpentine’s lawn to explore the hidden history of its previous Pavilions. Eleven columns characterising each past Pavilion and a twelfth column will support a floating platform roof 1.5 metres above ground. Taking an archaeological approach, the architects have created a design that will inspire visitors to look beneath the surface of the park as well as back in time across the ghosts of the earlier structures. You can see Ai Weiwei’s influence here…the need to reference the historical past of the project versus the contemporary perspective…there always has to be a past reminder as such. Where we have come from to where we are going to…