The past week and weekend has been crammed full of exhibition openings of new (and old) art, architecture and design on display across Shanghai. So, as usual, I have tried to see it all thus, spending a lot of time on my bike or in and out of taxi’s, negotiating this city within limited time constraints, interpreting what I see with a fresh heightened sense of criticality and what has become a rather brutal point of view. The more and more I see out there, and the more and more I write and review exhibitions of this kind, the less patience I have visually and through interpretation. Unless it “feeds” me within an instant…unless there is a catch, a pull, a draw through a word, image, picture, sound, thought, construct, physicality, emotionality…it can be something minute, to something grand…I will lose attention fast. This is what art is all about though right? The ability to be different, to stand out, to captivate, to cause a reaction, to trigger an emotion, to change you inside for just a moment.

In a series of blog posts over the next week, I will talk about some of these exhibitions I have seen…the first is ‘(Un)made in China: Architecture Undone in the PRC’, an exhibition curated by ide@s, on display at the Cannon Design’s ide@s gallery (Room 301, Building 9, 25 Jianguo Lu) in Bridge 8, a converted series of warehouse spaces in Shanghai that work together as a creative hub. ‘(Un)made in China‘ reminded me of the curatorial project ‘Rejected Collections’ by Shanghai-based curator Biljana Ciric, which presents contemporary art and exhibition proposals from the early 80’s through to today in order to reveal the transformation of artists’ working methods, as well as the relationship between current infrastructure and it’s establishing process. ‘(Un)made in China‘ is in a similar vein…

The show, on display until the 20th June 2012, presents a series of interviews conducted with 12 international global architecture practices about large-scale unrealised and abandoned projects in the People’s Republic of China. It is to highlight an absence in the discussion of these projects, to be seen as a celebration of what could have been, what (maybe) could have transformed architectural history…or in reality what would have gained a lot of creative criticism (as architecture does today), and a handful of followers. Would most of these buildings, like others that have actually been built in China, get lost in the fast-growing landscape here? The landscape of glass…overwhelming competitive scale…of post-modern “cyber” architecture that is enveloping Shanghai, and some of China. Ultimately, why do these non-buildings matter? From the video interviews, iPad project portfolios, architectural models and the video and image projections on display you can see why. The time, effort and creative vision put into these building cannot be ignored or forgotten just because they were not built. They need to be put up for discussion as much as those that are in our physical reality today. It is funny to think so many concepts get lost in time, never to be seen or thought of again, only referenced in a personal creative history and journey. 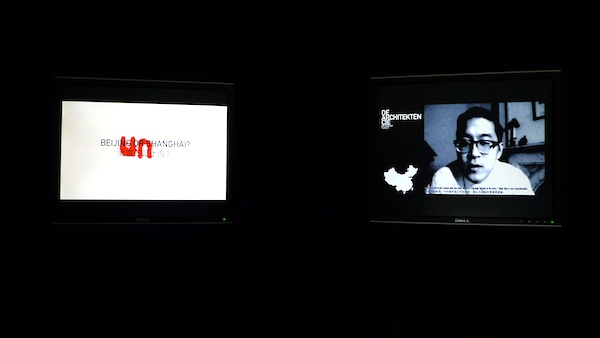 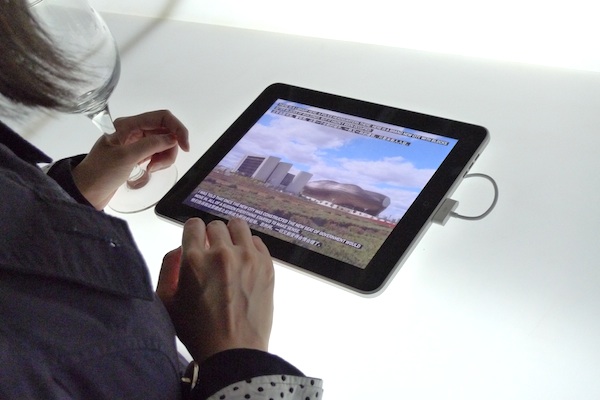 So what is the reason as to why these projects didn’t happen? Well, most of the projects don’t have a reason, they simply say “it’s China”…in fact I’ve literally just said that to a colleague in the office as she was saying she doesn’t ever want to get familiar with things here so it’s always a fresh new experience…and I said you can’t ever get familiar, “it’s China”…it’s a reason for many things here right? People are late for a meeting…”it’s China”. It makes me smile…”just put it down to China”.

The exhibition also attempts to reveal and get rid of some of the misconceptions surrounding architecture and architects in China, however, I’m not sure if they achieved this, as I still felt it became a showground for competitive creative architectural comparison…I don’t want to say it, but it was like male peacocks showing their feathers, that I don’t feel you get in the same way in a Western context…so “it’s China”. One sentence stood out from a wall of the exhibition space that kind of described this further…it read,

“My limited experience in China tells me that there is probably more receptive new ideas than you would find in other places.”

To me, when reinterpreted in my mind, it re-reads…”my limited experience in China tells me that there are probably more receptive architects than you would find in other places”…that architects here are at the height of their game and have come here to prove something creatively, to push their ideas…or I should say China gives them the creative opportunity to make things happen, developers give them the opportunity to make things happen…as I’m realising too through my PhD research, writing and curatorial practice…things can happen here, happen fast, on a big scale. You can dream more here (well in certain ways). Do architects come to China for a specific experience that they can’t get anywhere else? Actually this is quite a literal question – of course they do! So do they come here to see how it is to work within the specific cultural parameters, constraints and infrastructures (or lack of) in China in order to test their practice? Now this to me would be more interesting…finding out why architects came to China and what differences they have found in their professional practice in different localities. Always back to the “transcultural” experience Rachel, so integral to my PhD research. 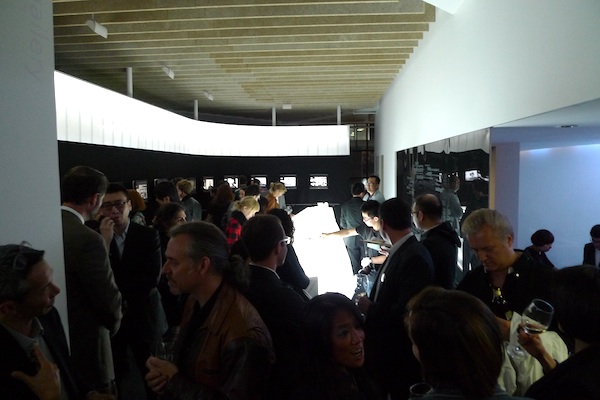 I’ll mention a couple of the 12 projects that are presented in the project…the few that remained in my memory since seeing the exhibition. The first is ‘The Xu Beihong Memorial Hall’ by AQSO in 2010. ‘The Xu Beihong Memorial Hall’ was to be a new public building dedicated to the Chinese painter in Beijing. In addition to galleries and exhibition halls it was to include a research center, education institute, and administrative facilities where the design of the structure, both its interior and exterior, were based around the fluidity and construct of the artist’s works…his ink paintings. Angular, contrasting reflective geometric facades were to interject light into the periphery natural landscape close to Xinhua lake, though I am unsure how it visually interprets the work of an ink painter…questionable in my mind. Supposedly visitors are to be drawn to the space from ” a curiosity of its dynamic forms”…I know I would be…but that’s due to a personal like of this type of harsh architectural form.

Another un-built structure as part of the project is ‘Long Tan Park Liuzhou’ by MVRDV from 2004. This housing development for the middle classes was planned for a lime stone mine as part of the Karst mountain range, which is protected as a World Heritage site. It was to question whether the creation of a new residential area in the mine can be used for further restoration of the park ‘to restore beauty’ and to stop further erosion and harm to the mountains. The buildings were ‘to appear like statues in the park, like the four presidents on Mt. Rushmore…individual boxes with a view that respect the desire for individuality and that avoid a hotel feeling.’ They were to follow the topography of the mountain and landscape. This project I had to mention as it made me smile due to its creative absurdity, its pinch of “wonderland” and admirable ambition that can only happen in China. There are so many projects like this that are actually being built and it astounds me…”it’s China”.

The final one I will mention is ‘Tongxian Art’ by NADAAA from 2001-02. To be built 30 miles from Beijing, it was to be a site for an artists community of international recognition who recognised a lack of public institution or space that served as ‘a magnet for interaction, a place for the presentation of art, or a setting for receptions’. It is a multi-phase project of two phases – Phase 1 (the gatehouse consisting of housing and studio space for artists in-residence) and Phase 2 (the art center, houses the galleries, public spaces, sculpture courts, administrative spaces and infrastructural needs of the institution). It was to use the renowned Beijing grey brick which I absolutely love…but that comes back to my love of brutalism, harsh concrete fearless structures standing strong…certainly more of those that I need to blog about but I’ll save them for a later date. Just one last question…what did you put down to China today?