Last night, I had a very long conversation with ABM, one of my elder brothers, about architecture. He keeps his finger on the pulse as regards the urban development of Manchester where he lives, following and contributing to blogs and forums…whilst watching global trends too. I like these conversations. We specifically discussed the global competition and (unnecessary) need to build the world’s tallest structure, referencing Tokyo’s ‘Sky Tree’, now the world’s tallest free-standing tower at approximately 2,080 feet, but still not taller than Dubai’s man-made structure, the Burj Khalifa, at approximately 2,720 feet. Having recently seen the Burj Khalifa during Christmas of 2010, I am astounded as to why these building are built on literal and metaphorical unstable foundations with no degree of sustainability past 30 years. An architectural fad as such…so what is the point? ABM and I then went on to discuss Shanghai’s architecture and the rapid pace of change in its urban development that I witness on a daily basis. He said he had recently been reading about “nail houses”, dīngzi hù (钉子户), something which I regularly see in the city here, but I’ve never actually known their name…I find it funny that they even have their own term…that’s very Chinese, a word for everything.

A pun coined by land and real estate developers in China in the late 1990s, when the rise of the free market enabled private developers to start to build hotels, real estate and shopping malls, it is a specifically Chinese neologism (a new word in my vocabulary). “Nail house”, dīngzi hù (钉子户), represents the people and homes who are unwilling to negotiate or move for land development to take place, who often act like “stubborn nails”, nails stuck in wood that cannot be removed or pounded down with any hammer. One of the most high-profile stories about a “nail house” is from Chongqing, China, in 2007, when a couple refused to leave their home when a shopping mall was to be built in its place. They were one of 280 families in the area that were asked to leave, once a “snack street” where the family had lived for three generations. Developers cut their power and water, excavating a 10-metre deep pit around their home. The owners broke into the construction site, reoccupied it, and flew a Chinese flag on top. The owners turned down an offer of 3.5 million yuan (£350,000), but eventually settled with the developers in 2007. It gained a great deal of coverage in the Chinese press and media, and online, where, as expected, the Chinese government eventually banned any talk of it.

There are two nail houses that I know of in my local area shown below…not quite on the same scale to the Chongqing example above. The first is on Anfu Lu, by Wulumuqi Lu…the other is on Maoming Lu, by Weihai Lu near where I work, and where a new metro/subway station is to be built, hence the need to destruct and destroy. Their absurdity in the urban landscape remaining and standing strong makes me smile. 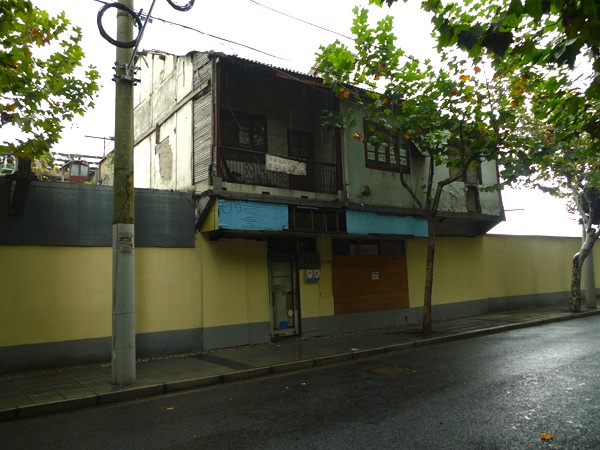