Another weekend afternoon, another art event to attend…you get used to this in Shanghai, and to me, it almost becomes addictive. Today, it was at Minsheng Art Museum on a very sunny Sunday afternoon. It was beautiful to see the area so busy and people engaging with the sculpture park. Definitely a perfect day for a cycle…though it was freezing. 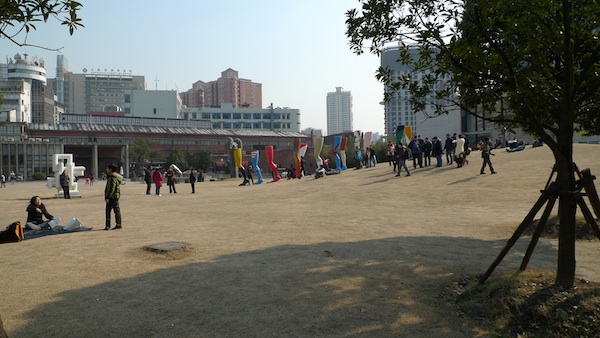 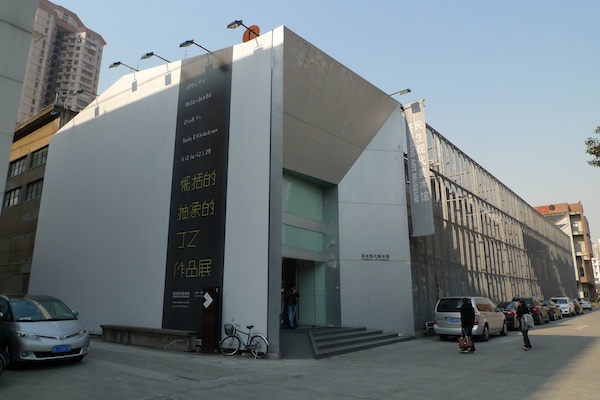 The first speaker was Vincent Worms, founder of Kadist Art Foundation. He first offered his thanks to the museum as they currently have an exhibition on display with them – ‘KADIST: Pathways into a Collection’. ‘The work of the Kadist foundation is very relevant to this topic. We started in Paris in 200, 2003 European Middle Eastern collection initiated, 2007 America and Asia collection initiated, 2010 programming starts in San Francisco, 2011 International development, including with China. There are half a dozen people working in each the Paris and San Francisco office. We also have a team of advisors of which Hou Hanru is one…We have a broad and shallow collection which aims at representing a global view of contemporary art today.’ Worms went on to give examples from each collection….European, Middle Eastern, American, Latin American, Asian including Gimhongsok (Korea), Eko Nugroho (Indonesia), Shilpa Gupta (India) and Xu Tan (China), and then the only collection that is media centric that means focusing on video, the Video American collection. ‘We would like to have an impact on the development of society. We believe artists do have a role and an impact on society and by helping them we are participating in the movement. In order to do that we must bring different art of the worlds together…developing countries and emerging art scenes. Therefore, we do a lot of programs to talk about this global-local discourse…We are not a museum like the Guggenheim. We are not interested in amassing a collection and making a great museum. The mode we like is to cooperate with museums like Minsheng to make interesting shows…When artists join our collection it creates an interesting relationship…the first goal is to create that connection. We also consider it part of our mission to support art creation by commissioning art from younger artists, which might man creating work that isn’t commercial. Finally, the collection is a material from which to build our programme, whether it be publications, exhibitions, commissions. Another important tool in order to create interesting discourse is we have residencies…artists and curators need to spend quality time to make projects. We believe education and participating in the artists of tomorrow is an important thing so we have a fellowship programme who can use the collection and the space of Kadist to create an exhibition.’ 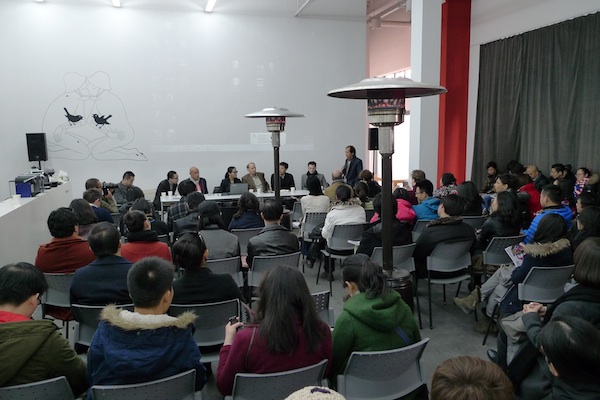 ‘What are we doing in China? For Kadist it is important to work with countries where we don’t have a presence. Chinese art is represented in the collection including Cao Fei, Lin Yilin, Zhang Peili, and we like to bring it to our Western audiences.’ Worms references the recent Kadist artist-in-residence Lin Yilin in their San Fransisco space. ‘We are talking about creating an education with a Chinese art school in the next year…What are we going to do next? We want to create a dialogue between artists in the West and Asia, artists and curators in China…borrow from collections in China.’

Next up was Larys Frogier, the Director of Rockbund Art Museum. He has only been with the museum for one month. ‘I define myself more of a researcher than a curator…the reason I left France is an intellectual and political choice. The practice for democracy in culture in France in Europe is problematic, whereas in China it is different. The West are trying to establish organisation to deal with Chinese art, at the same time Chinese people are creating their own organisations with their own strong appetite and critical position. That is why it is better to be here.’ RAM opened in May 2010 focusing on art production, art exhibitions, academic research and resource and international cooperation…the exchange of ideas, being a cultural questioner in the city.’ Frogier goes on to speak about the history of the non-profit organisation, the buildings architectural history, the education programme, whilst giving examples of past exhibitions including projects with Cai Guo-Qiang, Zeng Fanzhi, Shazia Sikander, Zhang Huan, Hou Hanru, Wu Hung etc. ‘How can contemporary art be put in a more critical position providing a more of an intellectual challenge for society today?…How can we question this situation of the institution and how can we broaden our scope? The main aim of the museum is to produce new artworks…put the team involved in new productions…A strong balance professionalism and crossed energies.’ The advisory panel for RAM include Alexandra Munroe, Hou Hanru, Lewis Biggs, the previous RAM Director, and Fumio Nanjo…surprisingly all the people from the Contemporary Art Forum…perhaps my brain didn’t link the two. I attended an event by the CAF in October 2011 on the first day I arrived in Shanghai. Frogier finished his presentation by stating a series of visual constructs that outline their energies, objectives and their development platforms as shown below. I’m very interested in these constructs as I am attempting to put one together to define my PhD research or at least to compare the difference between Western and Eastern curatorial constructs.

The rest of the session was in Chinese with no translation, which meant I couldn’t be fed any more information and blogging came to a halt…that was until the Q&A session. Tweeting was cut short anyway as the Internet connection cut out about half an hour into the talk. As always, I’m lack the integral knowledge of the Chinese language. It made me feel incredibly ignorant and as though my research was not valid. Confidence went out the window. How can I talk about a country’s art if I don’t know their language? But at the same time, I suppose that’s really the whole point of my research…the Western perspective. I wish I knew Mandarin.

The Q&A session opened up questions into art education in Chinese universities and how academic art courses can be made more practical and linked to the work of institutions, or how institutions can link their programming more towards academic courses such as curating and art history. Another question asked how Western institutions get new (and maintain) audiences for contemporary art and what strategies they use. Most people saw it as a global challenge even more of an issue in China, where it is often broad topics that brought in larger audiences, or the “blockbuster” big names. Frogier went on to state ‘We don’t need to take the challenge out of art…it is how we deal with the quality of the art and deal intimately with the small population…how can we go on step by step with the population? We do not want to please the large audiences or the politicians. We have to never lose this question of the challenge of art.’