A trip to the UK would not be complete without squeezing in a London visit, a jam-packed three-days filled with PhD and curatorial meetings, and well-needed hugs and chats with cornerstone friends. I’m not quite sure how I fitted everything into the time I was there. When I was there, I realised London is nothing like Shanghai…whereas I feel New York is somehow comparable…I’m not sure if it’s something to do with how compact the cities are, or the general pace and atmosphere of how they work…anyway, it got me thinking about the differences between global cities, cultures and people. For the majority of the first day, I sat in the cafe shown below…the very lovely Barbican Foodhall…where, most of that Thursday’s meetings took place.

The first meeting was with the Barbican‘s Jane Alison, the curator of The Curve gallery, who has recently organised the solo exhibition ‘Waste Not’ by contemporary Chinese artist Song Dong that opens tonight. (I wish I could attend!) This artwork was previously exhibited in a different manifestation as part of the group show ‘Re-imagining Asia’ at The New Art Gallery Walsall that I saw back in early 2009…so I was interested to hear how it was to be presented at the Barbican. We had a very brief chat about how the exhibition came to be, largely through suggestion by another curatorial colleague, Lydia Yee. The Curve gallery is an 80 metre commissioning space, one of the only two in London (the other being Tate Modern’s Turbine Hall). According to Alison, ‘there is now specific desire on our part to exhibit contemporary Chinese artists…we work with artists on an international scale who’ll work with the space.’ For Song Dong‘s exhibition, Alison stated, ‘we want to communicate China in a way that others don’t. Ai Weiwei monopolised headlines, raising the consciousness of Chinese art…it’s good for the Barbican to be involved with this. This exhibition is monumental, intimate and speaks to how people coped with deprivation and the legacy of that period…We are in a move to do what’s timely. Art is considered in terms of progress, therefore not just Chinese art is important…China is a growing powerhouse of tradition and culture. The West is slow in that sense.’ (Jane Alison 2012) Some very interesting comments, especially the latter which I duly note in my PhD research. The exhibition was one year in planning taking approximately six months to put together. Alison only had a brief window of time to squeeze me in then I was onto meet the artist and the exhibition’s curatorial assistant Sunny Cheung whom I had communicated with as regards the meetings. (Should I be putting capital letters for the word “curator”?) It was great to finally meet them all after chatting so much virtually.

Song Dong was a softly spoken man who really considered your questions…you could feel the artwork came from a deeply emotional consciousness in relation to his family history. ‘Waste Not’ is an installation that comprises over 10,000 items collected by Song Dong’s mother, Zhao Xiangyuan, over five decades. Song’s mother recently passed away making this artwork even more poignant. Objects included range from an original section of the family home, to metal pots and plastic bowls to blankets, bottle caps, toothpaste tubes and toys.

“The activity of saving and re-using things is in keeping with the Chinese adage wu jin qi yong – ‘waste not’ – a prerequisite for survival during periods of social and political turmoil.” – Barbican

Here are some excerpts from the conversation we had…Song stated ‘foreigners can know different cultures…it is when cultures are similar that life is hard. Different people have the same idea to keep and safe things for the future. The whole world wastes a lot…the older generation, my mother’s generation, want to keep everything…nothing goes to waste. The younger, new generation, waste a lot. I was taught by my mother. I have always used recycled things to make new artworks. Objects have a memory…but it is not the same today. “In the future in a cloud.” Each time ‘Waste Not’ is on display it is different. This is the 8th time where the location in the Barbican is very special. It is like a Chinese garden…a way through a garden so people can walk around.’ (Song Dong 2012) At this point Song Dong took my notepad and wrote down a series of Chinese characters to further explain the concept (as shown below). It is in relation to Chinese philosophy and the Chinese garden…”one step, one view”. 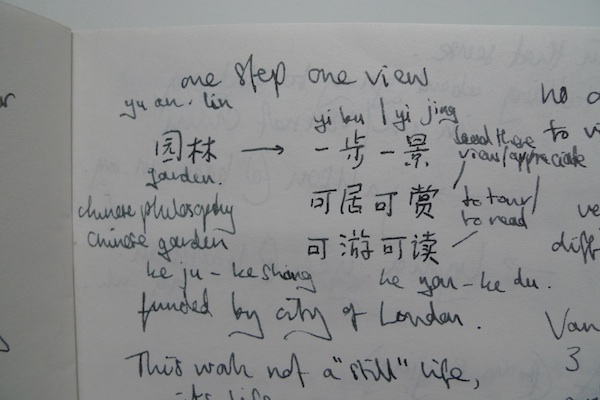 The characters mean…and you don’t want to know how long this took to decipher with colleagues and dictionaries…some of them are literal by the way, and probably poorly translated on my behalf – help therefore welcomed:

‘There is no one vantage point to view the exhibition…it is an adventure…very special as different times are shown at different stages. The work is not a “still life”, it is life.” The artwork is never dead…when I’m dead I hope it can still have a life, that’s why my daughter (9 years old) is here to help install so she can learn this work and it can continue. This time I am archiving…collecting an image archive but only of the fabrics. In the future just have an image…still archiving and continuing from the first exhibition…There is a difference in working in the UK and in China but a similar life. My home is not your home but there is still familiarity…Chinese to China, Chinese to UK.’ (Song Dong 2012) 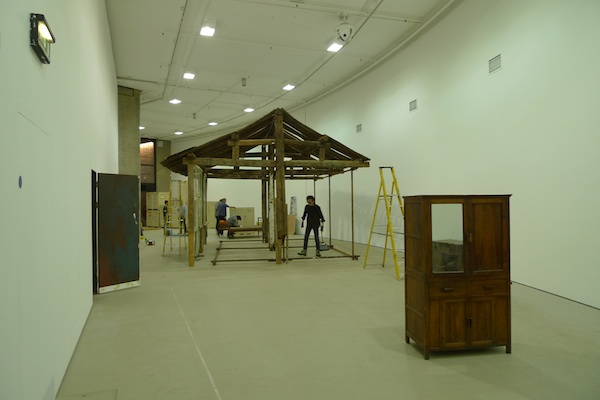 ‘The first ‘Waste Not’ show I did was in 2005 at Tokyo Art Projects, 798, Beijing…the gallery had no clue what I would do. They said I could show anything so they didn’t know what would happen. My first idea was to sell the work and buy my mother a house. The first circle is about life…my mother didn’t agree with selling it. So many things have good memories. Fei Dawei, the then Director of Ullens Center for Contemporary Art (UCCA),wanted to buy the piece and give the money to my mother. My mother wanted it to belong to her not to other people. This work is never for sale. I keep it for myself and my family. I have learned a lot from my mother about this artwork. Family is living within this artwork…This artwork is also about the fight, the contexts of the Cultural Revolution but the main focus is my mother and how she lives on.’ (Song Dong 2012) Very powerful words. It was so special to see his wife, sister and daughter there to help to install the show…all part of the process. Song spoke of future works including collaborating with his daughter through the development of a video installation. I cannot speak of the rest as they are in the making. He also showed me a copy of his new book that was produced in conjunction with the exhibition ‘Song Dong + Yin Xiuzhen: The Way of Chopsticks III’ (11th November – 19th December 2011) at Chambers Fine Art, Beijing. This is an ongoing collaborative project between Song and his Wife, Yin Xiuzhen. A very beautiful publication that blew me away due to its double fold out design…it was a very beautiful conversation too that really got me thinking for the rest of the day. People are the most important thing in this world…that and your health.

On with the meetings, now with Helen Kaplinsky, who I have spoken about previously as regards her residency ‘MEGA MODERN’ at 501 Art Space in Chongqing, China, in the Autumn of 2011. Our dialogues during that time regarding all things curating contemporary Chinese art, Chinese artistic and curatorial infrastructures and the East-West differences can be read here. I met with Helen that day as I’m hoping to write an article for Randian as regards the residency and the future of the project in China and the UK…also it was an opportunity to catch up on our current and future projects to see if we could exchange or help each other.

Throughout the day’s meetings, conversations and chats, I consumed four cups of peppermint tea, two cups of camomile tea, two glasses of water and the largest oat/granola/fruit/nut slice you have ever seen…actually, it was one of three that my friend ‘mk’ ordered in the afternoon after meeting number three…a mountain of muesli bars. To be honest we needed the carbs to fuel our motivational “live the dream” banter. My final meeting of the day was with a fellow PhD student Irene Noy, who I met at the one-day conference ‘Boundaries? New Histories of Art, Architecture and Design’ at the University of Bristol in the Spring of last year. Her PhD examines ‘Within the Materiality of Sound in works by Women Artists’ at the Courtauld Institute. We often converse (online) about the development of our research. She is super lovely. I think it is really beneficial to do this…to talk about research to those not directly in your area of research but who share the same reality of actually undertaking a PhD. It’s good to talk…and talk some more as I did the following day when meetings continued.