Cats are very instinctive creatives…they know when something is wrong, or when you aren’t feeling too well…and I certainly did not feel on top form at the end of last week. Frida, Lisa‘s cat kept me company (and warm) all day as I napped on the sofa. I’d caught a cold, which then developed into some sort of tummy bug…or it could have been my usually tummy/renal troubles…either way, my system kicked out and I felt terrible to the stage where I thought if this continues I want to go home…but I think most people when away working or travelling have this thought if they’re ill and they want their own bed immediately. Today, for the first time since I’ve been in China, my body and system feels pretty good, content for once…and calm. We like calm. I’m not sure how this has come about…maybe it was just a bug, maybe it was the herbal German drugs Lisa gave me to try, maybe it’s because of the large amounts of pro and pre-biotics I’ve been eating, or maybe just maybe it’s due to starting ballet class…who knows but let’s hope this feeling lasts. It’s time to get involved with this city… 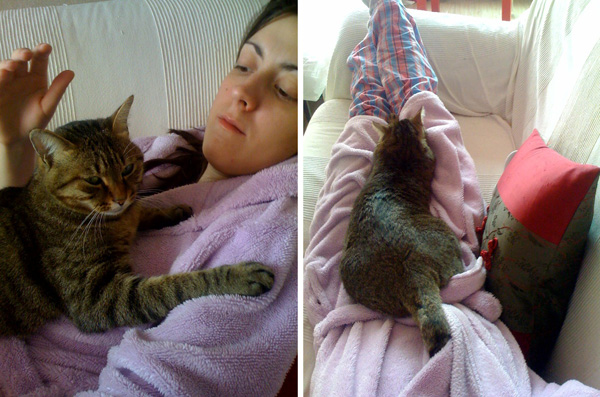 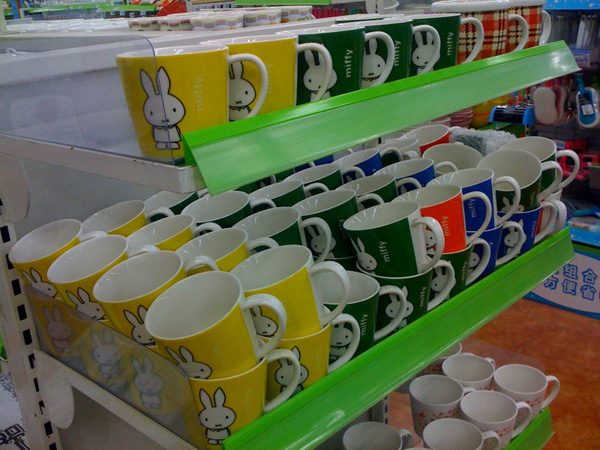 On a very brief venture out to the shops to get re-hydration snacks and drinks when I was ill, I found a shop that sold everything housewares including these Miffy mugs. My childhood was basically filled with Miffy…I had Miffy curtains, Miffy books…you name it, it had Miffy on it…so I had to get one…a navy blue one to use at home. My first slightly childish mug for my new apartment, which by the way I will talk specifically about in a separate blog post this weekend as there’s too much to mention here. I’m actually drinking peppermint tea from the mug right now…childhood kitsch.

Oh and my hair is doing that thing again…that I’ve just used a well know brand of shampoo and conditioner, Head and Shoulders the Chinese version, and it’s suddenly matted the roots together making it look greasy and covered in hairspray…when it really, really isn’t. Time to invest in an expensive Western brand. Having bad hair in the morning makes you feel off for the rest of the day, self-conscious, especially teaching in front of students. I kept on thinking “are you looking at my hair?” when they probably couldn’t care less about it. I had to go and get some Herbal Essences in my lunch break yesterday and it seems to have been kinder to my long dark locks. Good.

So what’s been happening (other than being ill!)…let’s start a week last Thursday when I had to go into work feeling yukky to interview a prospective student who wanted to study Visual Communication this year…even thought the academic year had started. I really did not feel good at all but pushed through the day…she was a more than capable student who will start with us at AIVA on Monday. After this, I somehow made it onto an exhibition opening, ‘Polaroids’ by Julian Schnabel at the Magda Danysz Gallery on The Bund. I must have been feeling a little better. At the opening, I met Eike Stratman, one of Lisa‘s German friends, who is responsible for Shanghai Detour, the Art Map and the new Fashion Map in Shanghai. It is an invaluable piece of literature to have if you are in the contemporary arts scene here in Shanghai as it tells you where all the galleries are, and when the exhibition openings are happening. I hope to talk to Eike in the future, or promote exhibitions through Shanghai Detour. I also met Margot Hamer, Project Manager from the Elizabeth de Brabant gallery…an English girl originally from Guildford, Surrey, UK…I actually grew up in Farnham just down the road…always a small world right? She was great to talk to and we had fantastic discussions about academia, Masters and PhD study, contemporary Chinese art, the art scene here and the possibility of developing some adult education sessions at Elizabeth de Brabant. She is someone I definitely want to chat to again as I felt we had so much to talk about. Always good to meet new people and finally start to get involved in the Shanghai art scene again. 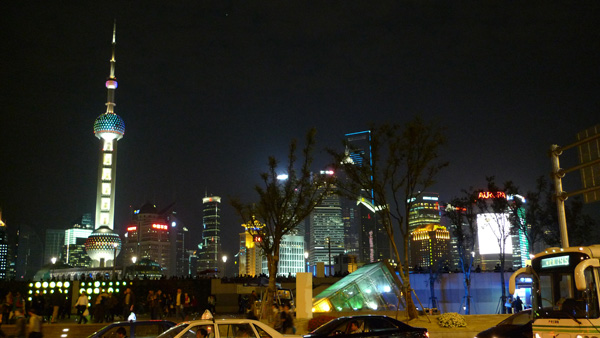 After the exhibition opening, all I wanted for dinner was cake…poached eggs on toast, or cake…so Lisa and I opted for cake from Baker and Spice on Anfu Lu. It was a carrot and poppy-seed cake accompanied by a huge peppermint tea. My tummy still wasn’t right though and wasn’t particularly happy about my choice of dinner so I had some rye and walnut toast afterwards as I thought that might calm things down. It didn’t work. Very good toast though… 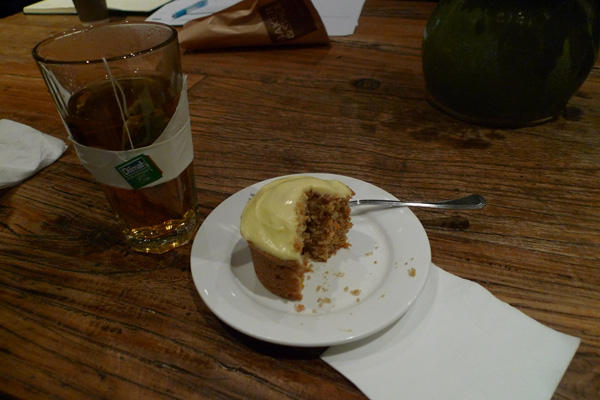 Friday was a write off…all I have written in my diary is “TUMMY CHAOS” is capital letters. All I can remember is painkillers, sleep, getting ice cream with Lisa in the evening and watching a DVD….well-needed recovery time. I’m not very good at stopping life to get myself better.

Saturday was moving day…so it was time to pack up everything I’d managed to spread across Lisa‘s place and move into my shared apartment on Julu Lu in the French Concession district of Shanghai. As I said, I’ll talk about the apartment in a separate blog post tomorrow…too many pictures, too many things to say. Lisa and I weren’t looking forward to the move as it involved moving all my belongings (3+ suitcases and more) up 6 flights of stairs…but we got it done with our prize being breakfast…poached egg breakfast at ‘Sunflour’ on Anfu Lu. My new local area. I saw this wedding car on the way…only in China do you see this kind of stuff. By the way, a big thank you to Lisa for all of your help! And to Barry to for having me stay for two weeks. 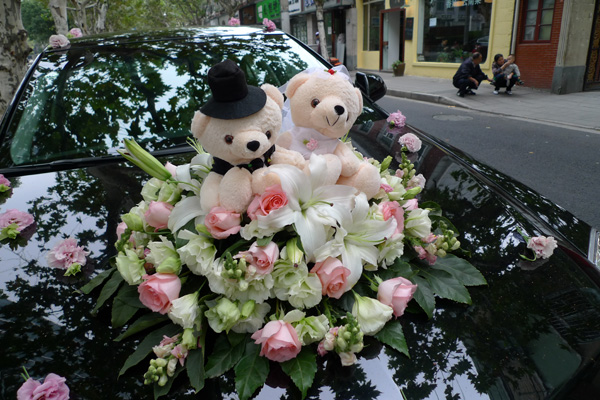 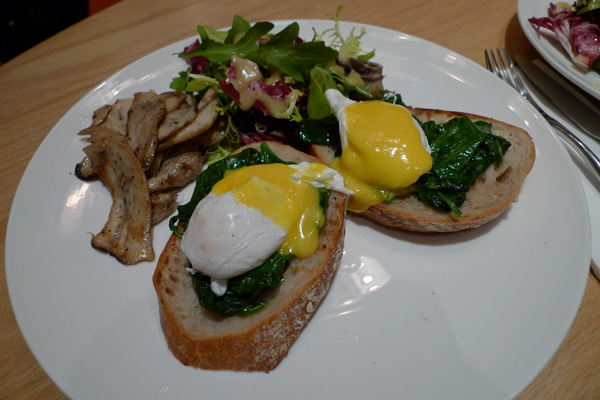 After breakfast it was time for IKEA…in the past week I’ve actually been to IKEA twice. The first time on this Saturday with Lisa…note to self NEVER ever go on a Saturday again. It’s bad enough in the UK at the weekend, so imagine it in China where there are literally millions more people. When in the store, nearly at the end of our shopping experience, I got to the stage where I literally just had to leave…that place was too much. My only incentive for going that day was the fact I could buy Swedish salted licorice at the end from the food part…and they didn’t have any! I was not impressed. The second time I went was on a much quieter Tuesday afternoon with Lisa and Barry’s Canadian friend Jonathan who I have met from a few Shanghai social outings. Tuesdays are a lot quieter. I read in November’s Time Out Shanghai that the IKEA Family Card gives you free coffee from Monday to Friday. So the older Chinese generation have started to use this as a social gathering place on Tuesdays and Thursday, even bringing their own flasks of green tea and home-popped popcorn. It has even earned itself a reputation as ‘a late-in-life hook-up-joint’. Random right? The store has even had to put an area of the restaurant aside for these visitors, so normal shoppers still have somewhere to dine. Only in China right? Or is this a phenomenon happening in other IKEA stores globally?

We can’t forget Halloween…which was my attendance at the Brazilian Jujitsu fancy dress party, a private party in the ARC China office on Anfu Lu/Changshu Lu. Courtesy of Lisa‘s paper body jewellery workshop with the students in the week prior to the party, I had a very Lady Gaga-esque outfit for the occasion. Along with a platinum blonde wig and some intense make-up I became her. That evening was the first night in my new apartment and the first time I really got to talk to my new flatmate Todd as we went for Taiwanese food with his friend and colleague Matt before the party. I had to tell them that I didn’t usually put in this much effort for a night out, or dress in this way. A strange first impression to make I thought…hi I’m Rachel, and tonight (Matthew) I’m going to be Lady Gaga. I pulled it off don’t you think? I’ve just realised how this blog post is not really that work related…some are likely to be a little more personal, others more in the realm of academia. After the party we went to a club called ‘The Apartment’ which was like an expat haven that night. They had a Gotham City theme going on so I stood out like a sore thumb. I think I was there for about an hour or so after some serious hip hop dancing before I got annoyed with people wanting to have their photos taken with me (a very Chinese thing), or mauling my outfit. Yes I know I’m Lady Gaga…a good night though. 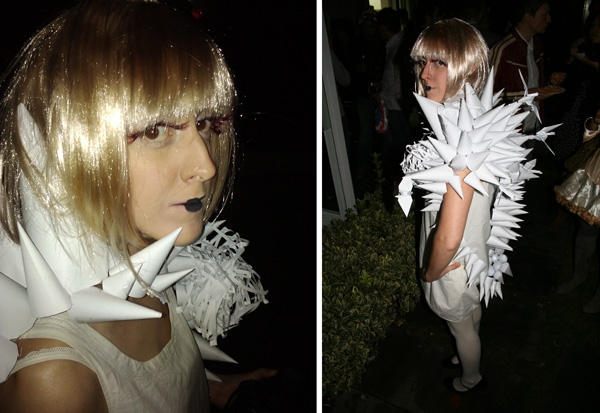 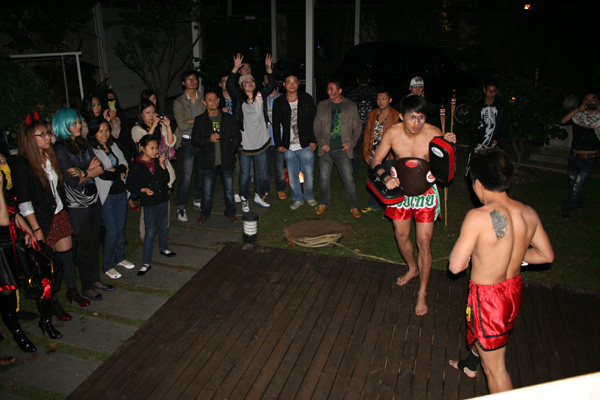 Sunday and I was woken up by drilling…banging…knocking…renovation of the apartments below. It was 9am for crying out loud! Seriously! I tried to sleep through it…doze through…but then I got so frustrated I just got dressed and headed out into the Shanghai sunshine to collect my bike from work and cycle round the city for many, many hours. It was a perfect day for it. I did have thoughts as to whether I’d made the right decision about the apartment, but Todd reassured me this was a one-off and that he hadn’t experienced it yet…there has still been a little noise since but nowhere near as bad, and after a week I’m really glad I live where I do. 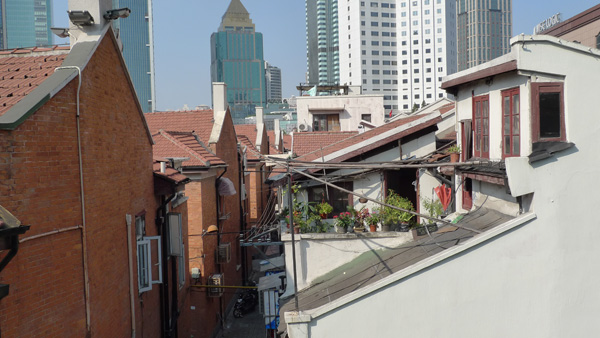 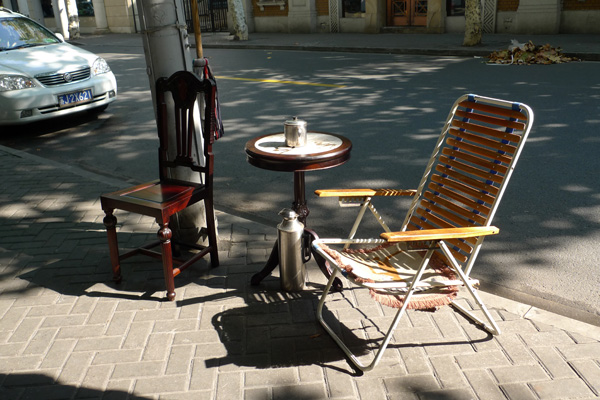 After a rather long cycle round Jing’an (the district where I lived last time I was in Shanghai) and a general wander round a few shops, I headed to ‘Kin’ on Maoming Bei Lu for the ‘Kin Creative Flea Market’ that was happening all Sunday afternoon and evening. I expected it to be bigger for some reason…it was a place for arts and crafts makers from Shanghai to promote and sell their work. It showed me what some of the local makers had to offer, and more to the point what they didn’t offer. There were a few good things there including ‘Les Copines Boucheres’, headpieces, necklaces and belts ethically made by ‘Peony Rice’, and a small handmade brown leather book necklace by a local creative (I haven’t got her name). I obviously had to buy the book necklace, which you can see on the right hand side in the photo below. I’m unsure as to whether I’ll write in it…perhaps I’ll add a few cut out images here and there. 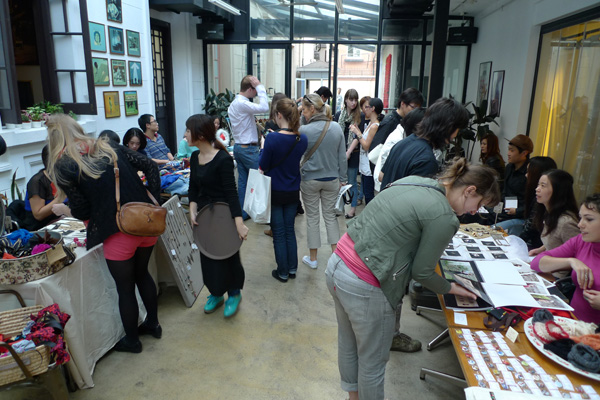 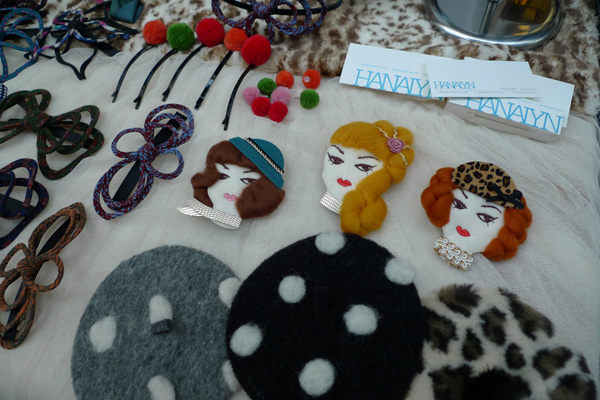 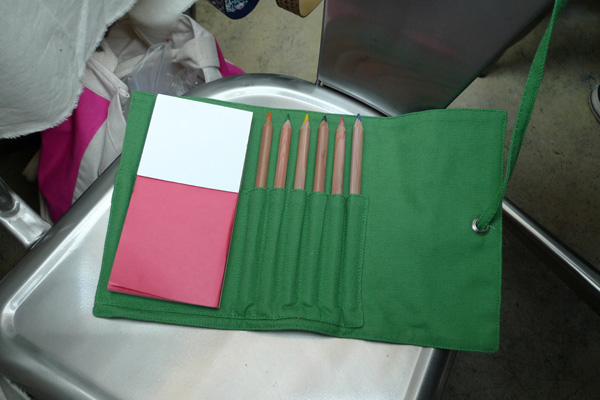 If I have the thought “I can make that myself” then it is often the case that I don’t buy it…unless there’s something really unique about it…like with the tiny leather book necklace. The sketching wrap above I thought I can definitely make this myself…it’s a clever concept. I was going to say nice, but Lisa and I were discussing that if you call design “nice” or “interesting” it means you aren’t really engaging with it…engaging in the necessary criticality…there are far more creative adjectives out there. Use them.

On the cycle home, I came across the Shanghai Lomography store, gallery and cafe…and discovered that they were having a camera launch on the Thursday evening…I’m sure I’ll be blogging about it soon but until then I have to go to ballet class…oh I started Ballet on Wednesday at a studio called ‘Jazz du Funk’…another thing I’m now involved with…