Notes, memos, appendices, footnotes, scribbles, amendments, initials, acronyms…words, words, words…written and then typed. I’ve had a week or so of (attempted) audio transcribing and analysis of all the China interviews. To be honest, I’m actually struggling a bit as other things have taken over, such as funding, exhibition and job applications (which take forever), interview prep, and of course like everyone…life. Life takes over sometimes and courtesy of a few happenings I’ve lost a little faith in the world this past week. How do you retrieve conscious effortlessness and confidence again? Although, I’ve always been a thinker…so maybe it’s not effortless. I think it’s one of the pitfalls of having a creative mind. Also, my tummy has been giving me grief and gyp today (I like the word gyp), most likely because of all that’s ahead. Anyway, enough of this speak.

I have somehow through various sources become very interested in the work of the Chinese collaborative partnership and photography duo ‘Birdhead’ since coming across their work at the Chinese Arts Centre, Manchester, in 2009, and also from the invitation I received from the Thomas Erben Gallery for the show ‘FOCUS SHANGHAI’, a group exhibition they were recently included as part of back in November and December 2010. I think it’s because of the spontaneous quality to their practice in the mediums of video and photography, and the examination of the “pace of change in the city, one which leaves no time for questions or hesitation”…this got me thinking about themes for the “evaluation in practice” or curatorial  platform strand to my PhD…about temporality, frenetic temporality, global temporality…disposable artistic practice created frenetically. I’m just thinking out loud.

So in terms of what I’ve transcribed, I’ve done Colin Chinnery, Davide Quadrio, Sun Ning and Claudia Albertini from Platform China, and Karen Smith. Through re-familiarising myself with these conversations, where to be honest I sometimes went off on MASSIVE unrelated tangents, I have managed to highlight key themes and possible chapters for my PhD thesis. It has made me get a little faith and happiness back in my research again.

Last night, I attended, with two of my colleagues from Wolverhampton Art Gallery, the event ‘What is British Art?’ presented by the Art Fund’s Director Stephen Deuchar. I seem to be forgetting to take my camera with me lately so I have no visually records of this event. Stephen used to be the Director of Tate Britain for many, many years and is an incredibly knowledgeable, articulate, focussed and engaging speaker. You could certainly see his passion and love for his cause, which in turn makes you realise your own love for your subject. When we arrived, Zoe, Zoe and I realised we were the youngest people there by at least 30 or so years, and I’m not exaggerating. As Stephen was speaking  about what he saw as now “International” British Art, the ethos of the Art Fund and his top ten favourite British Art artworks, he referred to them almost as his desert island discs that would vary each time he presents, we had small conversations, largely agreeing with what Stephen had to say. A few members of the audience sh-ed us or glared with disapproving looks. Stephen was also bombarded with very “traditionally” and slightly closed-minded questions directed at his views on specific controversial artists. I suppose they just want to see how their money is spent and why. Stephen was fantastic about the justification of investment in a range of arts. Stephen did also mention that along with the loss of gallery and museum staff, he saw that 2011 would see the closure of galleries and museums. It kind of hit home a little then as to the state of the arts in the UK at the moment. Which ones will have to close? Not very reassuring.

So in March this year, I am presenting a paper at the ‘type writing’ one-day symposium at Birmingham Institute of Art and Design. They have recently launched a new website called ‘the typographic hub’ as part of the build up to the symposium and its a rather nicely designed site. Also, the program of lectures and speaker line-up for the symposium can be downloaded here. I’ve still got to make a typewriter related piece of work for this conference so I’d better get my thinking cap on asap.

Tomorrow, I am attending my first meeting with all those involved with the ‘Asia Triennial Manchester 2011’ to see how my PhD research could link in with and compliment the off-site events programming. I think there’s been preliminary talks into a curatorial lab and an international symposium in four locations. I am very excited about this opportunity as it could do a lot for my professional development in addition to my research. Fingers crossed it will be a very fruitful morning. I’ll feedback in the next post.

Whilst looking through the latest Artprice guide, ‘The Contemporary Art Market in Asia’ (you can download a copy here) I was actually shocked to see this…that China had the second largest contemporary auction sales turnover in 2009/10. The UK is now third. Also, in 2009 Asia’s total auction revenue was substantially higher than USA’s for the first time ever. The guide is a little statistic heavy as expected but it gives you a good overall insight into to whats been happening. What will the next financial year hold? 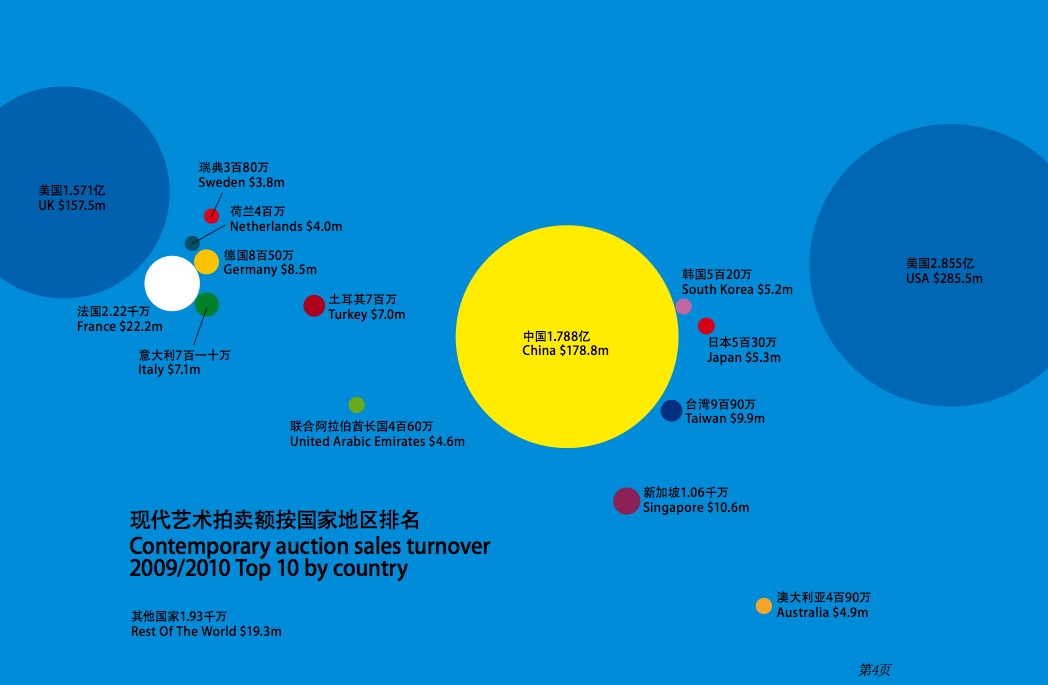