Now, where are we up to? Oh, that’s right…the 13th November…still two weeks of catch-up to go. An odd few days followed the previous working week, all before returning to the big smoke, literally, of Beijing. Oh the smog, how I don’t miss you. The weekend prior to this was interview-filled and was supposedly the opportunity to write the paper for the Centre for Chinese Visual Arts (CCVA) Fourth Annual Conference that I was presenting at on the following weekend. Does that make sense? I feel my words are a jumble today. Surprise, surprise the conference paper barely got started. Just like before, I found a million and one other things to do than sit down, research and type, type, type. I ended up napping…always a good option…cycling around Shanghai, going out for dinner with RJW to ‘Noodle Bull’ (one of our favourite restaurants), writing an abstract on typewriters for a totally different conference in March 2011 on “type writing” (which I’ve actually been accepted for), tagging along with RJW to Miss Lisa‘s Jujitsu team party at a place called ‘Sichuan Folk’ where there was  an international mix of people (including from Camden, London – this chap actually missed the Christmas Queen’s speech and Marmite), a feast of food, (including a sticky rice dessert that looked like a Bird’s Eye fish finger), traditional entertainment (where the performer changed a mask without you knowing how – he was treated like a celebrity in the crowds) and belly dancing… 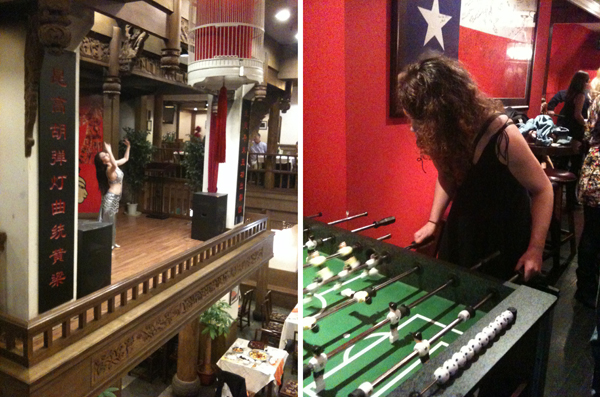 …as well as ending up at the after party at the Boxing Cat Brewery where we had our own floor with a bar, pool table and table football…wandering the streets of Shanghai eating my favourite pumpkin and sesame street food snack (I have good nails in this shot)…

…more sleeps, apartment tidying, moving furniture to create a better workspace, and a last-minute trip back to AIVA to collect my pay envelope and to use their printer. Seriously, I am good at work avoidance…knuckle down Marsden! I did eventually get there, into the writing “zone”, and it is so much easier when you start, but sometimes the hardest part is actually sitting down to do it.

The interviews I did over those four days before Beijing started on Saturday afternoon, online via Skype, with Philip Courtenay, co-founder of ‘e-space lab’. I found this fantastic Mac software that enables me to record whole conversations, audio and video. 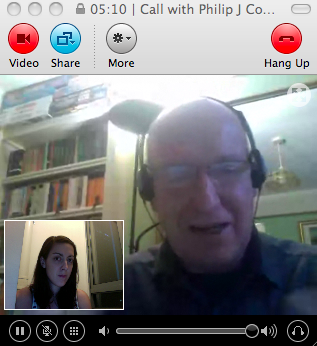 I was using one of his projects as a case study within the paper I was writing for the CCVA conference. ‘e-space lab’ are a collaborative group who use commonplace technology, including video streaming, to connect cities and urban contexts worldwide as a curatorial model and site for public cultural exchange. They build diverse networks of association, which are constituted by that association. We specifically discussed a project called ‘X-positions’ which intended to work as a ‘Biennales dialogue’ – an online conversational exchange and collaboration between artists, curators, designers and architects examining each of the thematics relating to the 8th Shanghai Biennale, ‘Rehearsal’, and the Liverpool Biennial 2010, ‘Touched’. The project couldn’t go ahead due to limited funding and some terrible bad timing, however I thought it would make an interesting example when discussing the idea of “transcultural” exchange. In our conversation, we spoke of the idea of “local to local” rather than “local to global”, the spontaneity of situations which breeds creativity, contemporary Chinese artists who had been involved in their previous projects including Chen Hangfeng (who I had met the previous week) and Xu Zhifeng (Shaw), other past international dialogue projects, the idea of juxtaposition and apposition as concepts of exchange, and cognitive mapping. A thoroughly good “cultural exchange” and someone who I look forward to speaking to further when I return to the UK in the New Year.

On Sunday, I interviewed the Director of the OV Gallery, Shanghai, Rebecca Catching. When I arrived at the gallery, I discovered the current exhibition on display, ‘Shifting Definitions’, was censored prior to and during its opening, therefore some of the works had been removed. You could see the empty spaces where they should have been as their captions still remained adhered to the walls. This is something not new to Rebecca as it has happened on a few occasions. It is always very interesting to hear that situations like this still occur as we enter the 2010s.

Rebecca comes from largely a journalism background, so we spent a lot of time talking about the importance and relevance of writing to curatorial practice and how, in different formats, it can aid “translation”. This turned into quite a long Sunday afternoon interview where at the end of our discussion, she offered me the opportunity to write for a new online contemporary Chinese arts magazine called ‘Randian’, and since this meeting I have spoken to the Editor-in-Chief, Chris Moore, again via Skype, about my commitment and contribution to it. My journalism portfolio is certainly going to fatten out over the coming year…good news but more work.

Monday came, and it was time for an excursion to the Taopu art district in Northern Shanghai. RJW and I got the metro there, grabbing on the way one of the tasty spring onion egg pancakes from a street food seller. When we arrived, after a little period of getting lost, we discovered we were in a particularly bleak industrial and post-industrial landscape, where a cluster of warehouse spaces have been renovated into artists studios, workshops and galleries, including ShanghART’s newly opened space ShanghART Taopu. 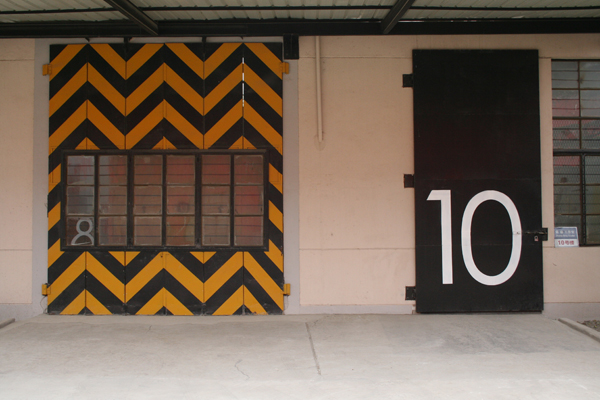 Here, I spoke to Lorenz Helbling, who established the ShanghART galleries back in 1996. This new space is absolutely vast in size. I’m trying to show you in the photos below taken by RJW, but they never quite do it justice.

My interview with Lorenz was quite short which enabled me to go and talk to the artist Xu Zhen earlier that expected. His studio for his collective ‘MadeIn’ was attached to the ShanghART Taopu space just round the corner. Xu Zhen didn’t speak English, and I should really say I don’t speak much Chinese, so we used his French interpreter. I haven’t given away much information about these two encounters as I think the content is very important. So nearer writing up as part of my PhD, I might give away a little more. All I will say is he called me a “cultural soldier…but where was my gun?…do you want to be a general?”. Very poignant thoughts after this happening.

As RJW and I finished earlier that expected, it meant we had plenty of time to get back into the centre of Shanghai for a 3pm meeting with Lynn Fu from the British Council. We wanted to talk to her properly as we didn’t really have chance at any of the China-UK: Connections through Culture, British Council Design Curators Tour events in Beijing or Shanghai. It was a good hour of conversation where RJW spoke of all the design meetings and contacts he has made during his time in China, with more and more happening each week (all super positive), and Lynn also told us about 2012 being the festival of UK culture in China. I knew nothing about this so I was immediately very intrigued as to who was going to be involved.

It was then time for Rachel to knuckle down, go back to the apartment and write that conference paper. At this point RJW decided to go for a wander round the city to let me get started. One thing did happen on the way home, on Monday 15th November. RJW picked up on it too later in the day and the evening. You may have already heard about it on the national and international news a couple of weeks ago…basically, an apartment building only a few blocks from where RJW and I lived in Shanghai burnt down…and we saw it happen. We did notice it in the morning but thought nothing of the smoke bellowing into the sky. You never do though. It ended up being a terrible catastrophe and stopped you in your tracks…stopped the whole of Shanghai in its tracks for nearly a week. There’s an article here on the BBC website if you want to know the specifics of why it happened. Anyway, I don’t know whether or not it is right to do this considering how many people lost their lives and got injured, but RJW and I took photos…he took video too, but I don’t think it is appropriate to upload it somehow. 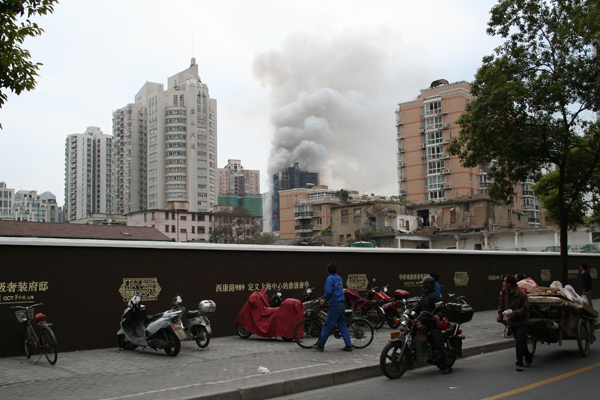 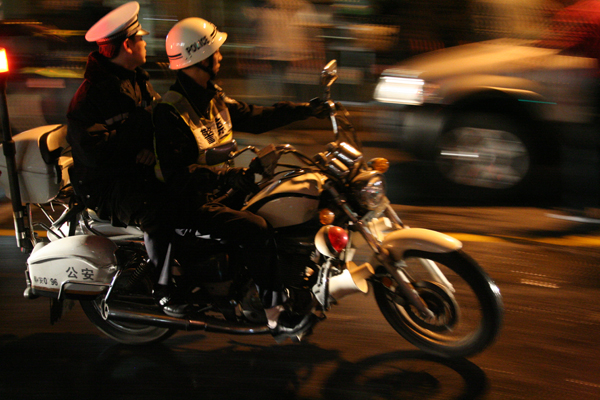 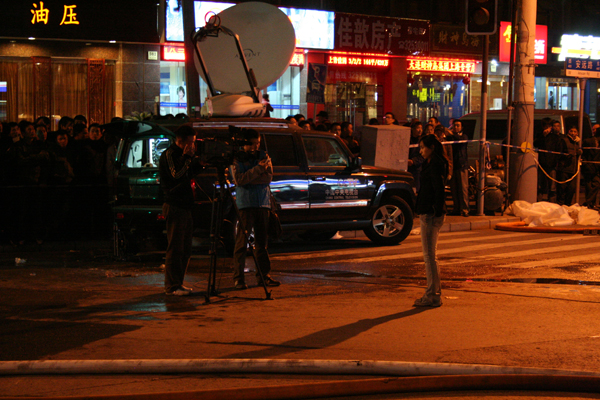 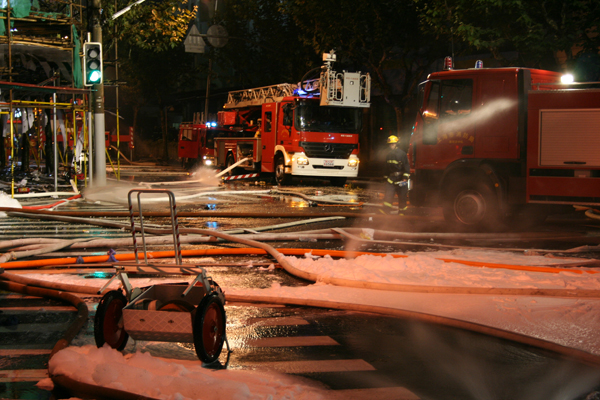 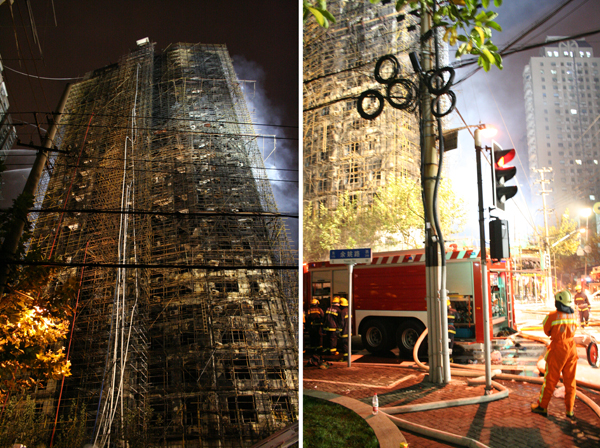 Some amazing photos taken by RJW, taken very sneakily too behind police tape…and one last image taken by me on my iPhone the day after it all happened. We cycled past to take another look on the way back from AIVA. It literally made me feel sick to the stomach when I saw it…saw all the people and the emotion…I had to get out of there fast as I started to well up. Our thoughts are with the friends and family…I have no idea what they must be feeling like.

My conference paper did eventually get done by 1am on Wednesday morning, the day RJW and I flew to Beijing. I never usually a do things this last-minute, I’m a girl who lives by her Filofax for crying out loud! But it got done and emailed to my supervisors to proof. And what did they say? Well, that’s for tomorrow’s post.