Sometime during the week of the 1st November, actually on the 4th November, RJW’s elder brother Mike sent me a message through Whatsapp on my iPhone…a message which, through its repercussions, actually progressed my journalistic career. Thank you again Mike for being another one of my subconscious PhD researchers. My friends and family seem to come across all things contemporary Asian art that are right up my street, especially my Mom which I love. Anyway, I was already aware of the Ai Weiwei exhibition ‘Sunflowers Seeds’ on display at Tate Modern until May 2011, but not of his studio in Shanghai that he has recently built and told to demolish, or of the planned protest party he was going to have on the 7th November 2010. So Mike filled me in…not that he really wanted to as he was concerned for my and RJW’s safety due to the controversy around this artist. It made me smile. Ai sent an open invitation out via Twitter saying he would serve 10,000 river crabs, a local delicacy, at a party to “celebrate” (and I state this term loosely because of all its connotations as well as to do with the definition of “river crab”) the demolishing of his new studio in the Jiading District of Northern Shanghai enforced by the government, even thought they had asked him to build it in the first place. It would start at 12pm and continue into the night. However, after tweeting Ai was immediately put under house arrest and unable to leave Beijing to attend, telling his Twitter audience that the party was cancelled. For those of you who aren’t familiar with the whole Ai Weiwei story, I’d take a look at this BBC article ‘Chinese artist Ai Weiwei says he is under house arrest’ which is very comprehensive and also includes two separate interviews, one with Ai Weiwei and Alan Yentob. We were never quite sure if it was cancelled, so RJW and I took the risk and jumped in a taxi just before 12pm that Sunday lunchtime…and this is what we experienced…it was really something quite unforgettable.

RJW and I handed the map to the taxi driver, obtained by email from Ai’s studio…and took in the journey as we went further and further north and out of Shanghai…going from cityscapes and high rises, to suburban complexes, to farm and village life and to Ai’s studio. It took just over an hour I think. As we got out of the car we realised it definitely had not been cancelled as there were literally hundreds of people there, waiting and anticipating what was going to happen. We managed to get the taxi driver to stay and wait for us as it was literally in the middle of nowhere but hadn’t decided on a fee which plagued me for the whole event. I always thought it was worth the price though, to experience such a landmark event in contemporary Chinese art history. Did I actually say that? Hmmmm…was it I ask myself again? Perhaps it was…

Once arrived, RJW and I got straight into documentating the event…photos, videos, snap, click click, snap…go, go, go. We both negotiated all of the spaces inside and around the courtyard and found out what was what. We located the kitchen where all the food was being prepared and the crabs cooked…the empty spaces which had been used as bedrooms since the Wednesday before by party goers…the huge construction area where all the crockery was being stored for use at the party (RJW and I managed to get two bowls and two plates to take home)…and we also managed to congregate with the other Westerners surprise surprise, mostly all reporters (Le Monde, South China Morning Post)…although there were only a handful of us there. I was slightly unnerved at times. At one stage a man came and asked me if I was to do with the arts and I said “yes”, so I asked him the same question for him to reply “no, I’m not”…we stared at each other for what seemed like an eternity for me to realise he was a plain clothed police officer. Right Rachel…I questioned myself that second as to what on earth I was doing, and doing there…but then that moment disappeared and I remembered. This is my world.

I wrote an article for ﻿Art Radar Asia﻿ which gives you more of an idea of what happened…I called it ‘A Party of Politics’ but it was swiftly renamed ﻿‘Ai Weiwei’s studio party cancelled? Art Radar was there…’﻿ It was also re-posted on the Ai Weiwei English translation site called ‘Bird’s Nest’ under the title ‘The River Crab Banquet’. I am an established contributor for them and will write posts and articles for the site next year. An Xiao Mina also edited RJW’s video footage down into this watchable short film which really gives you an overview of what went on that day.

As you can see, I managed to upload it to my YouTube page which hasn’t got a great deal on it, but it means I can embed and upload more content to here, as I have access to these sites in Hong Kong. It lets you see a whole lot more of what went on that day. So the article is below, I nearly forgot what I was doing for a second…

“As controversial Beijing artist Ai Weiwei remained under house arrest in Beijing for planning a protest party, his “party of politics” went into full swing at his soon to be demolished $1.1m (£670,000) studio in the Jiading district of Shanghai. It was an ironic celebration of the decision made by authorities to tear the building down after they had persuaded him to build it. Ai publicly cancelled his party via Twitter and through the media on Saturday. He led the authorities to believe it wasn’t happening, only for it to go ahead on Sunday afternoon from 12pm.

People had travelled from far across China, staying and sleeping at his studio from Wednesday to secure a place at the long dining table, which crossed the central courtyard. The feast included dishes of stewed beef, pork and asparagus, fresh bread, white rice and the promised 10,000 local river crabs. Local chefs and kitchen-hands made and served the food from a small room at the front of the building, viewed through an open window which turned into a public viewing platform.

The crabs, considered a local delicacy, were used at the party as a jibe at officialdom. In Chinese, the word for river crab, hexie, sounds very similar to that for “harmony”, the ideological buzzword of the current regime referencing the censorship of China. It is a word that is frequently used ironically by Chinese Internet users, and here is used in reference to the “harmonising” of Ai’s new studio. As the crabs were served, people started to chant repeatedly, “For a harmonised society eat river crabs…”, whilst smiling and laughing, considering it a personal yet political joke.

At one stage, a young teenage boy held up a handmade sign making his own personal protest, only to quickly be patted on the head by an elder and told to think clearly about his actions. Later on in the day, the commercial reality of the event set in as the organisers sold books and large photographic portrait posters by Ai. These posters were held up by individuals as another form of visual protest, explicitly referencing back to the propaganda posters used during the Cultural Revolution in China in the 1970s.

Only a handful of Westerners were present at the event where the atmosphere was jovial, although there was a serious undercurrent filled with the negative possibilities of what could occur that day, making you realise the local and global presence and power of not only Ai, but the authorities.

At the end of the event questions remained. Will river crab become a banned food in China? And would consuming this delicacy mean that you hold subversive intent against the authorities?

Ai Weiwei’s installation Sunflower Seeds, which was also restricted, this time due to public interaction being considered a health hazard, is currently on display at Tate Modern, London, until the 2 May, 2011.”

Here are some photographs too, some credited to RJW and some to me… 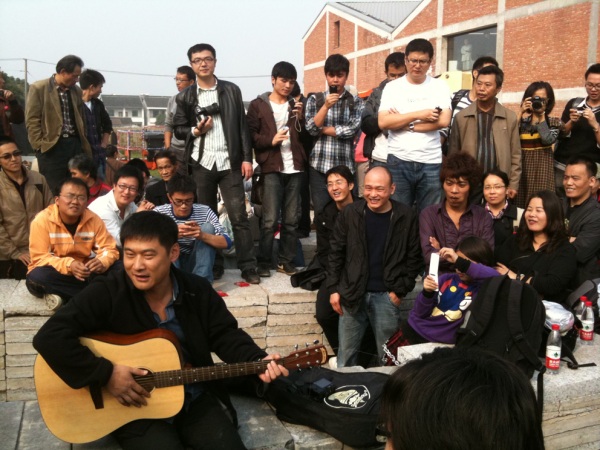 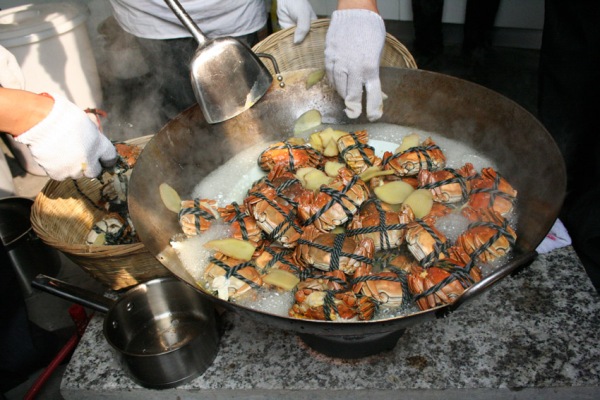 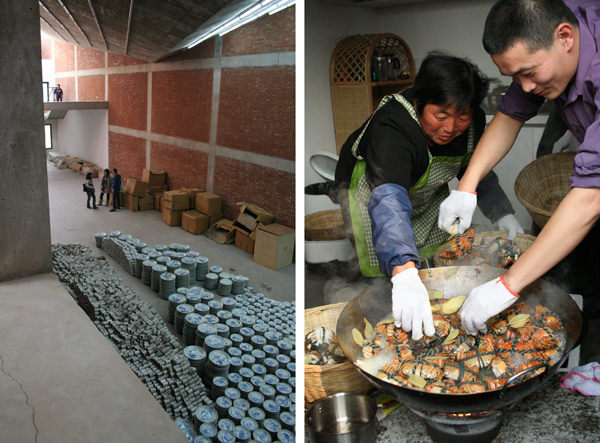 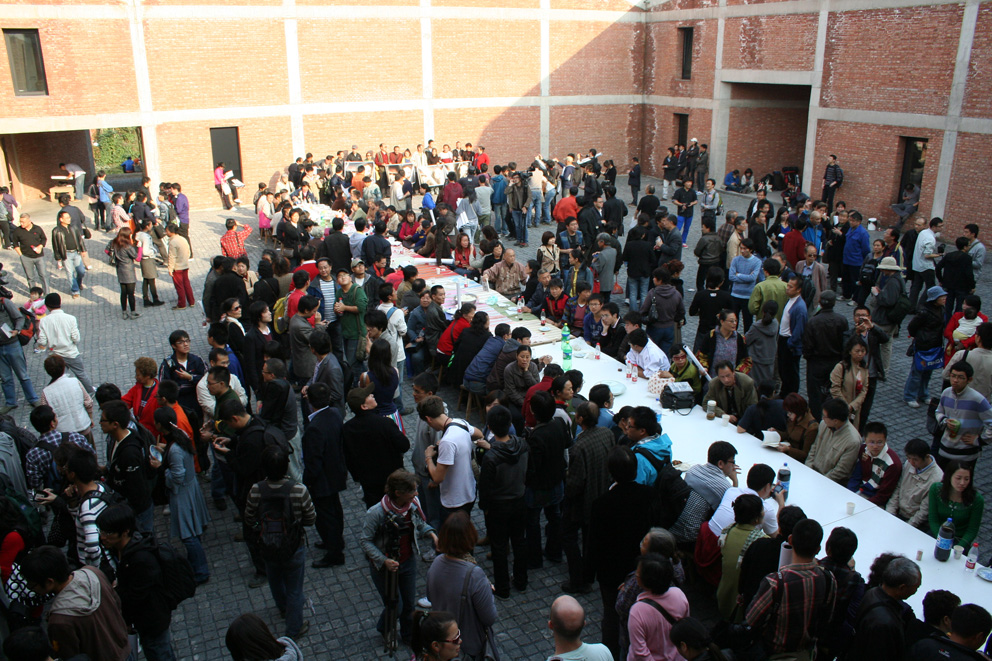 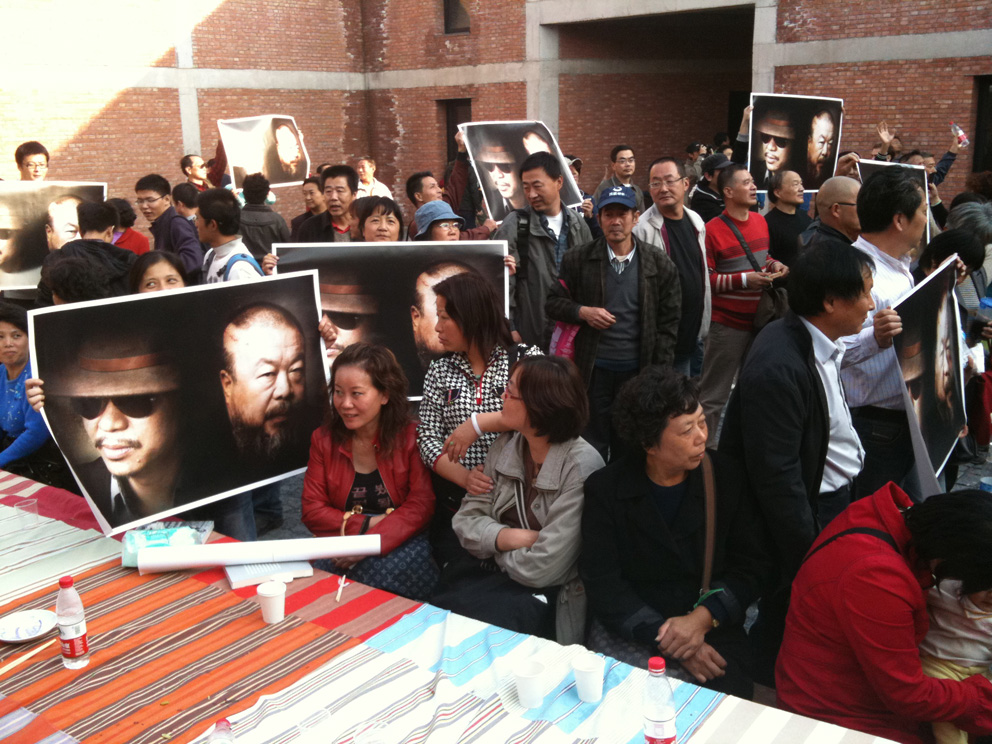 I managed to get hold of one of the posters shown above, although I wasn’t very content in getting involved in the commercial and corporate side of things. RJW and I thought it would be an investment…maybe? Then Rachel went and left it on a Hong Kong bus from the airport when we arrived on Saturday. Well done Rach. I knew it would only get so far from Shanghai! I hope they don’t end up being worth a fortune as I will definitely kick myself, over and over again. Everything happens for a reason right? I keep telling myself that.

One last thing I have to tell you…the taxi driver only charged us (a chap from Le Monde jumped in the cab) an extra 100RMB on top of the taxi fair which was a complete steal…and as soon as I got back to the apartment after the “party of politics”, I wrote the above article for Art Radar Asia, and also sent content, photos and videos to the BBC, the Guardian, Reuters (even though I knew they were there), The Times, Sky News and a few other sources that I thought would be interested…anyway the Guardian and the BBC stole a sentence word for word from my other article/text I’d send…the pleasures of being a journalist eh…I should take it as a compliment right?