This is how I’m feeling at the moment…and I’ve mentioned this phrase before…mama huhu 馬馬虎虎, horse horse tiger tiger which means so-so…I think my head’s tired from galivanting around this city so on Friday I decided not to leave the apartment and catch up on blogging, PhD admin and interview transcribing, as well as catching up on Season 4 of ‘Mad Men’, which I’ll no doubt quote later on. It always has some good ponderous thoughts. Don had started swimming to avoid and distract his mind from other things in the episode I watched. I wish I could go swimming out here as I think it would help clear my head…it makes you literally “weightless” in more ways than one. Cycling doesn’t always suffice as you are constantly surrounded by cars, pedestrians, other riders, honking horns and the constant white noise of the city. I’d like suburbia or the countryside for a day.

Friday was also the start of a week-long holiday as October 1st is the National Day of the People’s Republic of China. So below is how I set up THE work station for Friday work time…vegetable bean noodles at the ready to fuel my thoughts, and Skype on for anyone who wanted to distract me. I started to list who I was interviewing where and when…as well as noting some quotes from a few contemporary Chinese art articles I’ve come across…pasting things into my notepad of things I like and collected like printed receipts, stickers and articles I’ve found. I’ve been reading a copy of the ‘CIGE Gallery Guide‘ and ‘The Beijinger’ (kinda like Time Out) and funnily enough came across an article about curator Karen Smith who I interviewed on Saturday. It was a very brief Q&A asking her about books…her favourite sentimental book? If you could peek at someones bookshelf who would it be? If you should read only one book from China? Have you ever pretended to read a book? And what is the one character from a book you’d like to meet? A very random yet personal insight into her life and I’m actually reading the one book from China, ‘In the Red’ by Geremie Barme…a more historical account of China’s cultural past and development. I like the way she is so honest about only flicking through the pages of her journalists friends books whilst not really reading them. It made me smile.

Whilst reading ‘The Beijinger’ I read a disturbing fact that ‘a 2007 study found that nearly 40% of bottled water in Beijing is merely tap water with fake seals’…ummm ok so water is my kingdom, my one and only drink…nice. Though at the same time I thought this might be the case as sometimes it does taste funny. I remember having a bottle of ‘VOSS’ in Tianjin and commenting on how good it tasted. Water can taste so different when its only water as with most things that are the same thing, they are each still different.

“When a man walks into a room he brings his while life with him. He has a million reasons for being anywhere, just ask him. If you listen, he’ll tell you how he got there, how he forgot where he was going, and then he woke up. If you listen, he’ll tell you about the time he was an angel or dreamt of being perfect, and then he’ll smile with wisdom, content that he’d realised the world isn’t perfect. We’re flawed because we want so much more. We’re ruined because we get these things and wish for what we had.”

I told you I’d end up quoting ‘Mad Men’…it’s true though. I swear we’re all searching or trying to achieve more in the hope that it will take us somewhere, make us happy…finding that dream?

It started raining so heavily that evening I worked in dim light with the window open so I could hear it beat against the apartment block and the concrete whilst I was writing. It was so calming I stopped for a few minutes to stare out at the skyline…after all I am 25 storeys up…or is it only 22 as there are no number 4’s or a ground floor? I wish you could have heard how loud it was…there’s nothing quite like a rain storm. I don’t think I mentioned but RJW was out on boys night as Nick had come to Beijing from Tianjin for the weekend, hence the work night. They returned at about 3am a little drunk and both snored like two old men all night.

The weekend began with creeping around two sleeping boys, getting ready for my interview with Karen Smith. I can’t actually mention much about this interview as she signed the consent form stating you wanted nothing published online, and in my head that included the images taken too…so my apologies for that. All I can say is that when I met her in her studio near the Forbidden City, it was a complete haven in there…full of artworks, beautiful chair design classics, architecturally calming and simplistic layout, and of course Karen was fantastic to speak to and engage with…I really got a feel for her role in Beijing and China in the contemporary Chinese art domain, as well as some good curatorial perspectives. If anything is more formally published about this interview I will keep you informed and post it here. I always feel as though I can take on the world after an interview like that, that my PhD can and will get done, little by little, day by day. Most of the time it never feels like that though. After the two-hour academic dialogue, we discovered our bikes were surrounded and being leaned on…they thought RJW was great as we tried to retrieve them. Who knows what they were saying to us. We cycled north to try to find a space called ‘Arrow Factory’ on Jianchang Hutong which we never found…address noted but no contact details, so I’ll have to email them and see them in the week. Maybe they’re away for the National holiday like everyone else. We did come across a shop, bakery and butchers that sold all things English…mustard, beans, walkers crisps, cereals, biscuits, cheese…you name it, they had it. I just bought some oat nut bars as everything was super expensive, like £5 for cereal.

We went on to meet Nick by Houhai, a lake that we cycled by in the week. It was so busy there I got a little frustrating, as sometimes in this city it gets a little overwhelming with everyone always around you. I thought everyone had gone away too, how I was mistaken. It was so windy that afternoon and prime kite flying weather.

From here, we went on to meet Cory and his girlfriend Marta on Nanlougu Xiang for lunch, which was slowly getting later and later in the day…we ended up at a Mexican restaurant called ‘Amigo’ where we had nachos, tacos, burritos, stuffed chillies and numerous margaritas for those kids…

When I came back from the loo, I found all the boys with cowboy hats on which I think set the tone for the rest of the afternoon of silliness and laughter as we wandered round the shops. We saw a guy on a quad bike whilst walking his dog, and a random huge white duck walking down Guloudong Dajie with its owner…everyday brings random things. Everyone kind of scattered at about 5pm…Nick went home and RJW and I went to collect our bikes only to, after purchasing a new Diesel handbag as my other one has fallen apart (actually RJW got it for me as an early Christmas present, argh I have actually mentioned Christmas for the first time) and a gift for my brother, meet Cory and Marta by the Apple store in Sanlitun. We had another shopping wander where I bought some contemporary art BBC documentary DVDs to use in teaching here and back home and then sat down for dinner at ‘BananaFish’…sushi (some with banana in), grilled mackerel, grilled aubergine, asparagus and sweet potato, tuna…all fresh food, very simple. 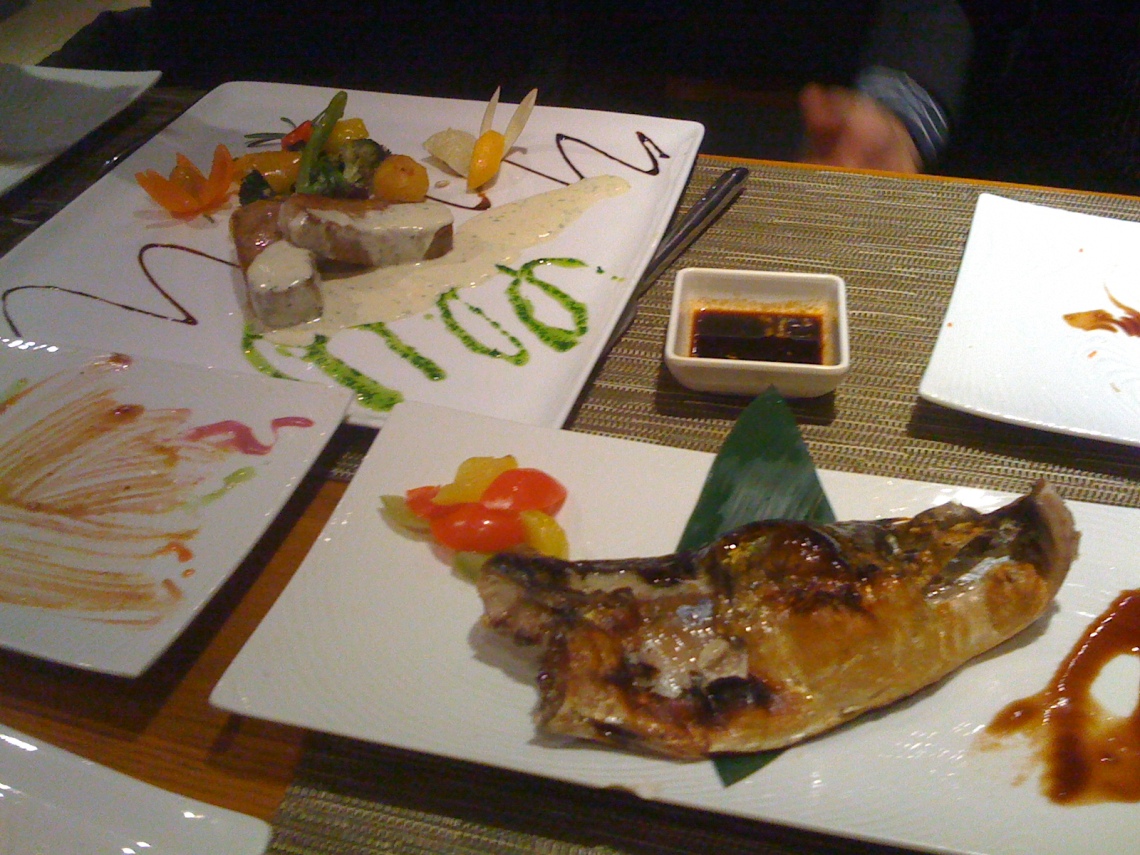 When chatting to Cory that evening, he informed us of how in Chinese zoos, you can pay to feed the animals, now I’m not talking lettuce to a rabbit…i’m talking live chickens or goats to big cats…to lions and tigers. No wonder when we were in Tianjin, Qian said that I wouldn’t be emotionally stable enough to go to the zoos here…that’s crazy. Seriously, who would want to pay to see that? More of Cory and Marta’s friends came before we left, one of which was a whiskey drinker…and which whiskey was his favourite? It was my favourite too, the 15-year-old Oban that my Grandpa drank…funny eh…we high fived and the conversation continued. Random. Oh and Cory and Marta showed us this phenomenon called ‘Asian Poses’…just have a browse of that webpage, it’s ummm interesting. After fish-fest, we moved onto a bar called ‘Second Floor’. RJW and I didn’t stay for long as we were both shattered, so after picking up the latest copy of ‘The Beijinger’ where I discovered a reggae night  for RJW (woop woop) at a place called ‘2 Kolegas’, we cycled back and slept, ready for a lazy Sunday.

I spent most of Sunday doing a quick Tesco shop where we found these toads…and yes they are live…I’ve only seen live fish before…today they had turtles and toads! At £2.30/500g…I think the Tesco out here even use the same font on their signage… 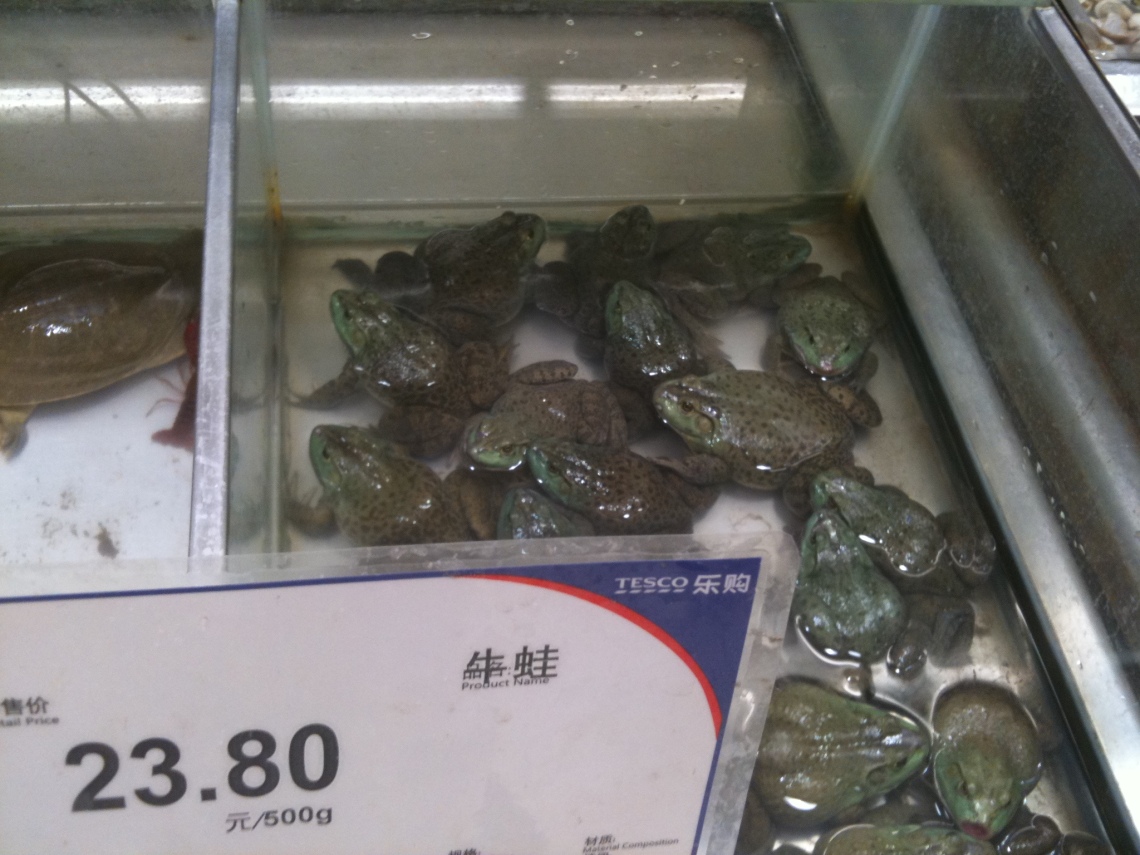 I also spent time scouting out jobs, calls for conference papers and funding…it’s often a Sunday thing I do in the UK. I came across some super relevant opportunities, but let’s see whether any of them actually come through. Part and parcel of being a creative is accepting the fact that 9 times out of 10 you are likely to be unsuccessful with applications…or is that statistic too high? It is a case of find out what happened, what went wrong and move on without thinking too much about it…no matter how much you wanted or needed that funding or exhibition. In the words of Jay-Z, “on to the next one”…