You can turn a corner in China and be surrounded by familiarity when, in reality, it’s just commercialism. The wonders of branding and money. The Louis Vuitton store in Shanghai, just down the road from AIVA, is a huge suitcase the size of a tower block that peers over the whole street…it just doesn’t make sense somehow. Beijing is the same. We arrived yesterday evening and got to our apartment in Chaoyang District, on the periphery, south-east of the city. It’s right next to a TESCO and the late night shopping experience was strangely familiar as they have TESCO value, yet most of the produce is different, obviously. Our apartment is on the top floor, the 25th floor and the building has no 4th floors of any kind as 4 is a bad number in China’s eyes. I think it indicates death. I didn’t see this is Shanghai as much though, so perhaps it is more of a northern China thing.

On Friday, RJW and I went to ‘Furniture China 2010’, a furniture fair on the outskirts of Shanghai, to feed RJW’s design mind. I think this might have been more of a trade show but there were a handful of good pieces in there…chair designs that is, which were largely based on design classics. There wasn’t anything overwhelmingly impressive or “new”. One thing we couldn’t get over was how cheap everything was…seriously 100RMB for a chair…that’s under 10GBP, 45RMB for a bed frame…right…if only importation tax wasn’t so high. The taxi journey back into the city took forever as it was crazy traffic. RJW and I fell asleep to the sound of Chinese pop music and awoke to the driver swearing in English as no cars were moving. Very random, I questioned where I was for a second. After the slow frustrating ride, we went for lunch at a place called Noodle Bull and I ate a nice dish of thin sesame noodles which came with fresh onion, carrot and tofu. A little stressed by time and running around, we then went and met Joshua at AIVA so we could head over to H-Space (ShanghART) in the Moganshan Road art district for the opening and preview of the group exhibition ‘Useful Life 2010’ (MadeIn, Yang Fudong and Yang Zhenzhong) where I got to meet the Director of the Gallery, as well as artists He An and Xu Zhen, neither of which could really understand English and it made me feel incredibly ignorant. I wish I knew more Mandarin. That’s on the list for 2011 and whilst i’m here! The exhibition had inventive air conditioning constructed out of huge ice blocks in wheeled tubs with big fans behind them – it worked well. The exhibition is a continuation of a show of the same name from 2000, where these three same artists reflected upon their impulsions, desires and dreams. Now, 10 years on, the art environment, artists’ creative concepts, ways of expression and even their identities have changed – what can and will they present in relation to this new context? A highlight to the show was Yang Fudong’s epic multi-screen film montage piece shown below.

Captivating through timed interactions and encounters, it has no spoken dialogue, merely slow choreographed moments with an instrumental soundtrack. Yang Zhenzhong also presented a series of photographs which showed the sublime happiness of a group of individuals…is this happiness real? Or is it a play on media’s power on happiness?

After this exhibition preview, we also managed to see Xu Zhen’s exhibition space which presented more raw art and artists…very far from what we had just seen. I was quite taken by one digital online piece which looked at the naming and archival process of computer folders. I can’t remember the name of the artist and I don’t have the press release with me, its back in Shanghai, but it had something…you can see me here reading the context, presented bilingually so I was lucky. 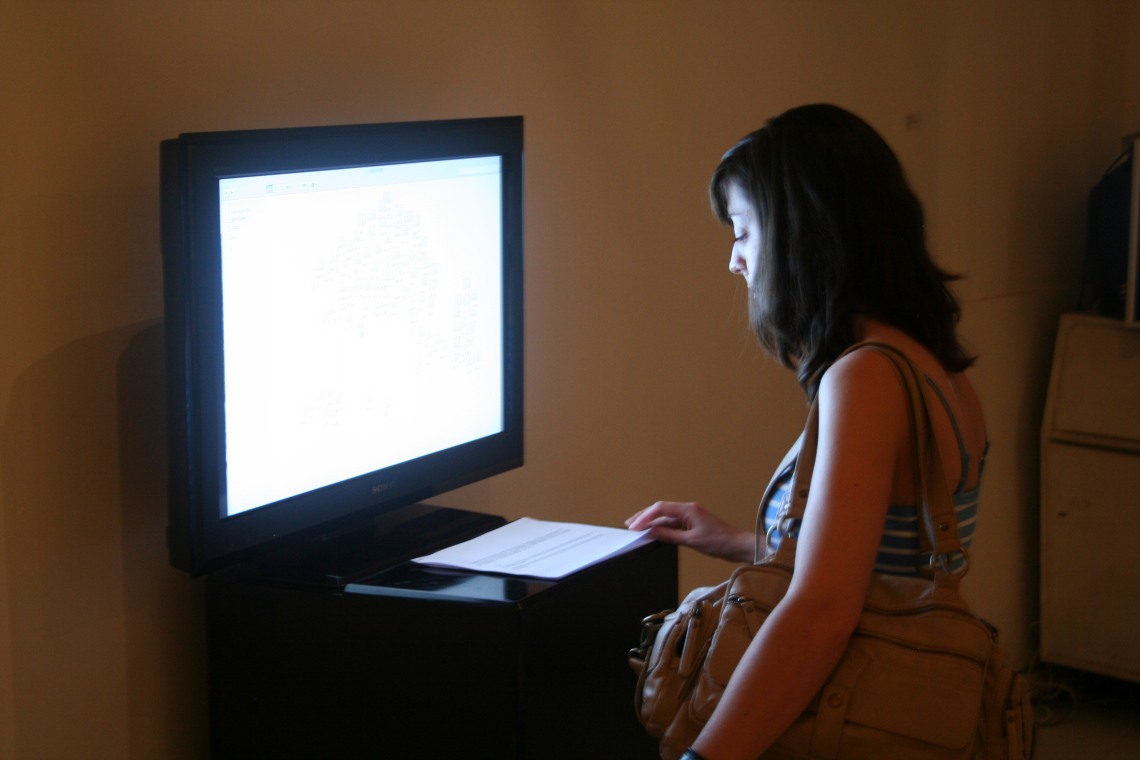 After the wander round a few show openings, which actually felt the same as going for a Saturday wander round the Chelsea galleries in New york, Joshua took us for dinner at one of Lisa’s favourite places called Lynn. Super contemporary with low lighting and booths, Joshua ordered a feast, and I mean a feast. One chilli-tastic dish is shown below, and it wasn’t as spicy as it looks.

This is also where I got recommended and discovered watermelon juice and I think I can drink it. Joshua made a deal with me that when I next see him in November in Beijing, if I can by then order dinner correctly by speaking Mandarin he would pay, if I can’t and he has to order then I have to pay. So RJW and I are on it, never one to turn down a challenge, come on it’s me…so time to get learning and fast. Post-it notes ahoy! RJW has no fear with Mandarin. For some reason we decided to walk home after that meal, I thought it was 20 minutes or so…I think after an hour tired feet and tired minds meant we degraded into stupidity, but again, beautiful Shanghai nights.

Saturday began with an interview and very honest opinions given by Colin Chinnery, Director of the ShContemporary Art Fair. I will put a more comprehensive outline of it when I have transcribed the notes. He was a very interested self-trained arts professional who had worked in so many fields including being an artist.

The afternoon consisted of rushing around from taxi to taxi, dropping off luggage we didn’t yet need at AIVA and attempting to meet Davide Quadrio on time for an interview at Minsheng Art Museum. The latter fell through as we got so delayed and Davide had to prepare for the launch of the new archival project ‘Materials of the Future: Documenting Contemporary Chinese Art from 1980-1990′ and a new book ‘Contemporary Chinese Art: Primary Documents’ by Wu Hung. RJW and I took the chance for a little time out before the afternoon unfolded in a cafe by the gallery We ate cheesecake and drank the sweetest, milk based drinks we’ve ever had. They love lots of sugar when things are sweet here. We also overheard Wu Hung in conversation with two others, talking of how the new book was the first book on contemporary Chinese art to have more text than pictures. RJW and I then had to rush back to AIVA as it was the first introductory session for the new students that I will be teaching in October when we are back in Shanghai. A little daunting, there were about 20 new students, and I’m not sure whether any of them understood what I said when I had to give an impromptu hello and few sentences. It is going to be an interesting process.

RJW, Joshua and I then returned to Minsheng Art Museum for the said launch. There were many of the contemporary Chinese art scene elite there, along with familiar names and faces…all in discussion and conversation. RJW managed to grab me a copy of the new book before it sold out. Yet to read but it smells fantastic – fresh print, you can’t beat it. I finally managed to speak to Davide Quadrio quickly in the offices of the museum, who again like Colin, a very honest man about his career and viewpoints. Again, I’ll be more specific about findings when I get round to transcribing the interview. There are already a few common threads coming through.

RJW and I went for a little wander after an art filled few days. It has been intense. We found Minsheng’s more offsite venue, Mao Livehouse (a club) with a Dickies sponsored event, fruit sellers that took advantage of a western buyer, films for less than a lottery ticket, various random edible treats including a soya sauce soaked egg that looked like wood, and a very local eatery. Not having any clue what was what, we went with the point at someone else’s food that looks good method and it worked, courtesy of RJW. We got 4 meat in some sort of gravy dumplings each, yummy…and a lot of looks. I’ll fill you in on Beijing beginnings next time… 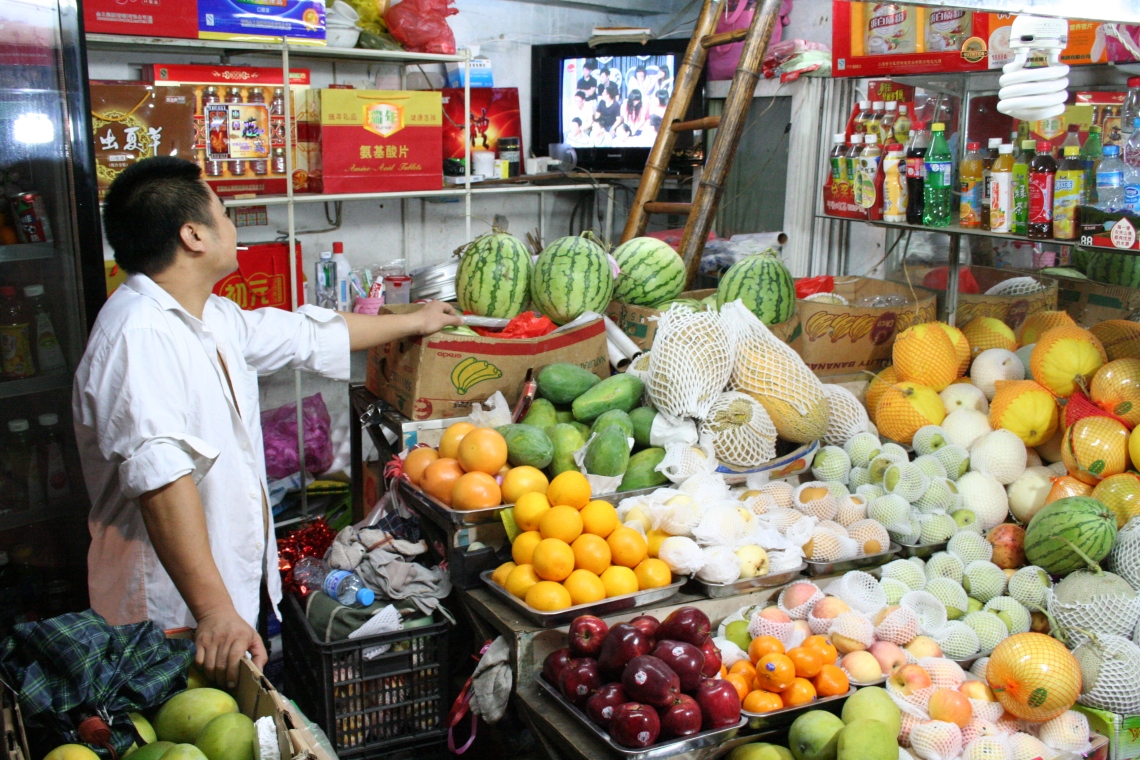 “Life must be understood backwards, but it must be lived forwards.” (Quoted by RJW and it makes sense today)