This week has been a week of many different kinds of what i’ll call “surprises”, hence the intensity of the selected Pantone colour below. Full of sunshine, brightness and hope, it’s name “super lemon”, also links to couple of odd bitter happenings and moments that have occurred this week that you just can’t control sometimes, they jump out of the blue and scare you.

At the beginning of the week, I attended the two-day BIAD Summer School called ‘Promoting your Research’, a programme for doctoral students and researchers, and faculty staff. There must have only been a handful of PhD students there, and the rest staff, which was good as it meant meeting some new academics from very various disciplines, most armed with a glossy new iPad too. I started writing this post on my iPhone as I made my way to Paris this weekend (I’ll talk about this emotional whirlwind trip later on), and it’s the first time I’ve done it. Seriously, typing with one fingertip doesn’t get you very far…so I waited until I got back to type the rest on my laptop.

Day one of the Summer School began with Professor Paul Wells talking about practice-led research in relation to his own research in the animation and scriptwriting domain. He was a truely inspirational speaker, with clear passion and drive. He spoke of the language and intentionality of the researcher, where its terms and conditions ought to be contested, clarified through a range of tensions and definitions. It is essential to create a language of expression different to the research’s core approaches. Where there is…

“No theory without practice. No practice without theory. No progress without history.”

Wells stated practice-led research addresses ‘practice’ without conducting it, engaging with a range of ‘practice’ outlooks and contexts. He broke down four specific methods of research, which I believe are of great reference to methodological constructs. They are:

“Research is curosity. It only becomes knowledge until you critically engage with it, before then it is information…all ‘practice’ is a site of knowledge and can produce alternative realities to test the assumption of pure knowledge.”

The second speaker of the day was Simon Raybould who looked at ways to make presentations more memorable and effective, highlighting the influential physical, intellectual and contextual factors. He immediately tells us all never to use bullet points…and references threes presentation techniques which I will be putting into practice:

He spent some of the session speaking of ways in which to calm your nerves, saying organisation through lists helps, breathing techniques, experimentation with your peripheral vision and anchoring. The last one I found intriguing where you train your body and mind by “anchoring” something good to the situation. Raybould’s method was to touch his wedding ring as this reminded him of the happiness and security of home life. On top of all this helpful information he recommended his website the ‘Presentation Skills Blog’ which I am yet to investigate properly.

Day two of the Summer School started with a brief lecture by Dr. Caroline Archer, who spoke of ‘Type Writing’, how researching, writing and presenting your writing are linked. I felt this talk was a little basic for the level we were all at, but I did like finding out the definitions of words such as “widow” and “orphan”, in relations to the formatting of text on a page. Alison Graham then followed, talking of what is and what isn’t a research poster. A research poster presents, in a graphical format, an aspect of your research such as a chapter, case study or paper. It is an invitation for others to approach, discuss and engage with your research. The photo below shows two examples which I think are conceptually and visually successful, however, they are usually a lot more scientific based and crammed with information on various accessible levels. Apparently, viewers will only give 5 minutes maximum attention to your poster if drawn in. I believe less is more, where questioning and ambiguity breeds intrigue. She did state three keys factors of impact, structure and coherence. I think a good design and creative mind helps too. 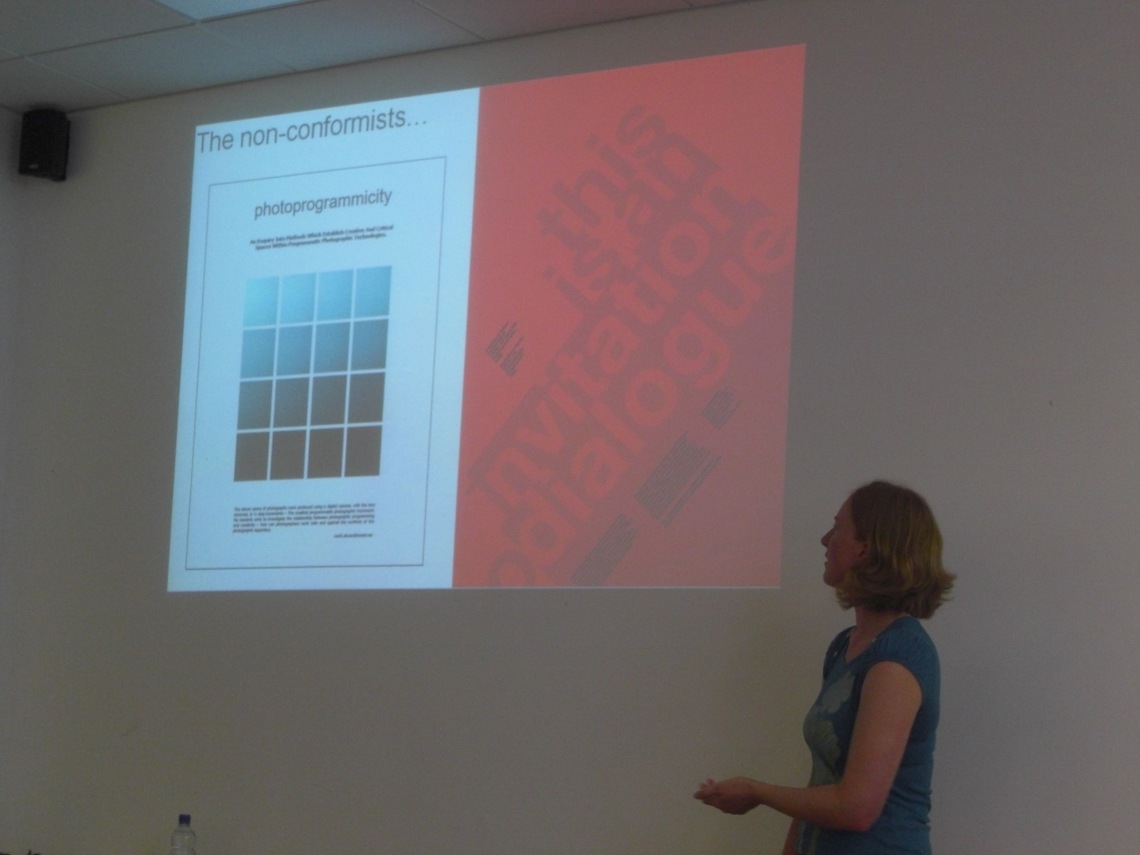 The final speaker Jennifer M. Jones, jumped in with an overwhelmingly graphically interactive presentation constructed on Prezi about Social Media strategies, something which I am very familiar with due to work and research. I really feel that these methods aid and very directly develop my research sometimes. Its also a good way to keep up with what’s going exactly this moment, now. These two days got me inspired and motivated about my research, tuned back in to what I was doing, preparing me a little for my time in China ahead, but what happened in the next few days I was not expecting.

So Paris – why did I go? Well, it was a very last minute decision made after RJW unexpectedly went into hospital on Tuesday night, two days before he was due to cycle from London to Paris for the charity The Big Issue Foundation. Having seen him be so ill, working and pushing through each hour to recover, and having driven him down to London at 4am on a very bleak Thursday morning to commence the first leg of his journey, the 70 miles from Twickenham to Portsmouth, I had to see him cross the finish line under the Eiffel Tower. How he managed to cycle that day on barely any sleep I don’t know! I couldn’t even get off the M25 with out needing a service station mega-nap! So, on Friday afternoon after work, day two for RJW on his bike ride and now in France, I started the first leg of my London to Paris journey and headed to Bow, London, where I was staying over at my friends new flat. During the post-dinner evening wander (we ate baked beetroot and trout which was amazing) tiredness began to kick in, but I’m sure not on the same scale as to what RJW was feeling.

Awake at 5.30am the next day, I travelled on to get the Eurostar, and the morning was a real struggle. On the bus journey to London St. Pancreas, the 205 from Bow Road, I noticed everyone reading…the bus driver at traffic lights, the bus passenger in transit, the park-goer relaxing in the sun…yes, at 6am! It was a strange kind of peace before the city kicked into action. All this reading happening in a time when the online retailer Amazon claims e-books are outselling hardbacks in the US (Telegraph 20th July 2010). I hope not, but I fear it’s happening. There’s nothing like getting a brand new book, looking at how its bound and designed, the paper type used and the smell of fresh print…”book sniffing”…or maybe that’s just me…

Apparently, I was in Paris for 36 unforgettable and life-changing hours…ummmm how did that happen? Apart from instantly realise how lucky I was to be in such a beautiful city (which put an instant contented smile on my face as I walked by the Grand Palais in the afternoon summer sun, New York you are still my number one) I spent a few of precious hours in the Palais de Tokyo and the Musée a’Art moderne de la Ville de Paris. 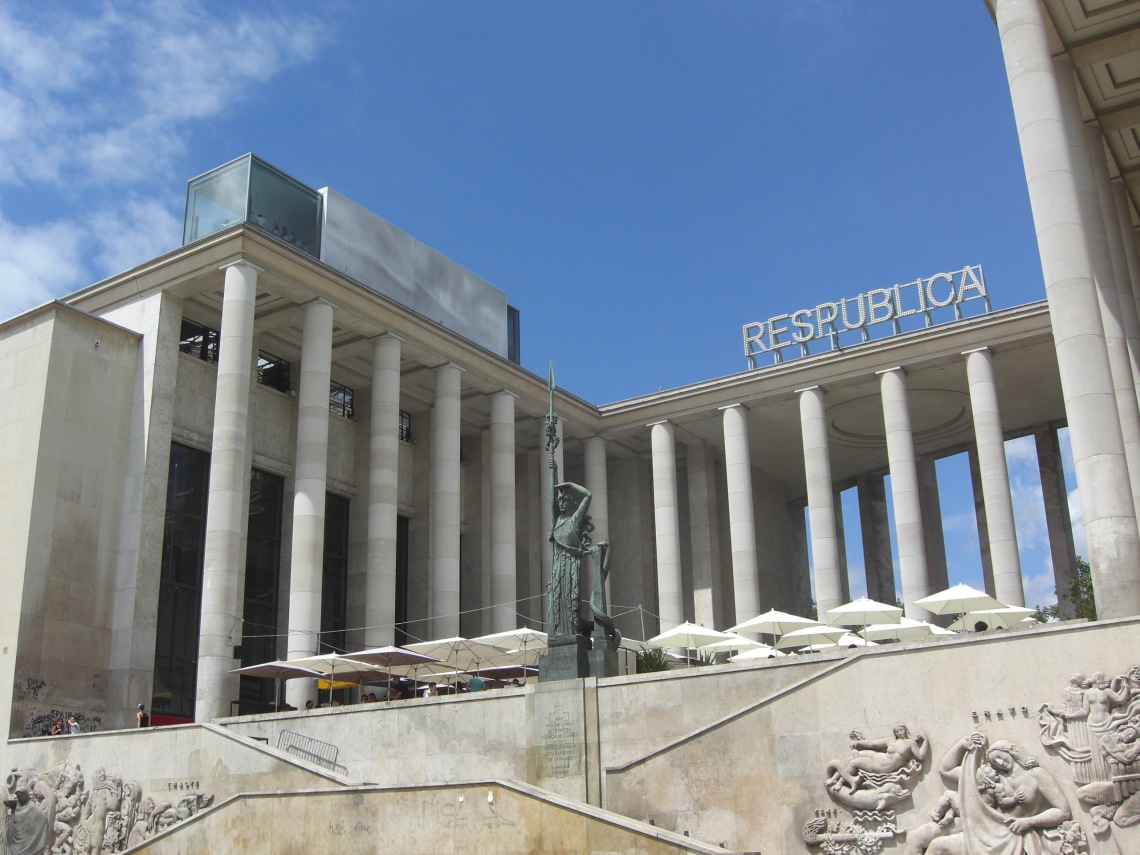 Firstly, yes that is their meeting and board room on the roof in a small glass cube overlooking the Seine and the Eiffel Tower. I hope everyone is ok with heights who works there. I was immediately impressed by the fact that art students are given free entry, something which other European institutions should consider. It made me feel like my research and efforts were respected, like I was directly giving back. If UK economics keep on heading the way they do, where today it has been announced that the UK Film Council is about to be abolished (BBC 26th July 2010), perhaps introducing paid entry to government run museums is a compulsory option. It is an interesting argument to be had and I’m sure is being discussed.

At the Palais de Tokyo and MAM I got completely immersed in the large group exhibition ‘Dynasty’ which presents an overview of the young French art scene, including French artists living abroad and foreign artists living in France. Using many techniques and stylistic approaches including film and structural sculpture, the 80 “propositions” as they were called, infuse and interact with the exhibition space, revealing the drive and diversity of a new generation of artists and their preoccupations, using contexts of the future of man-machine systems to political and social realism. Some examples are shown below by video artist Chen Yang and the breeze block sculpture “Tripode” (2010) by Vincent Ganivet. 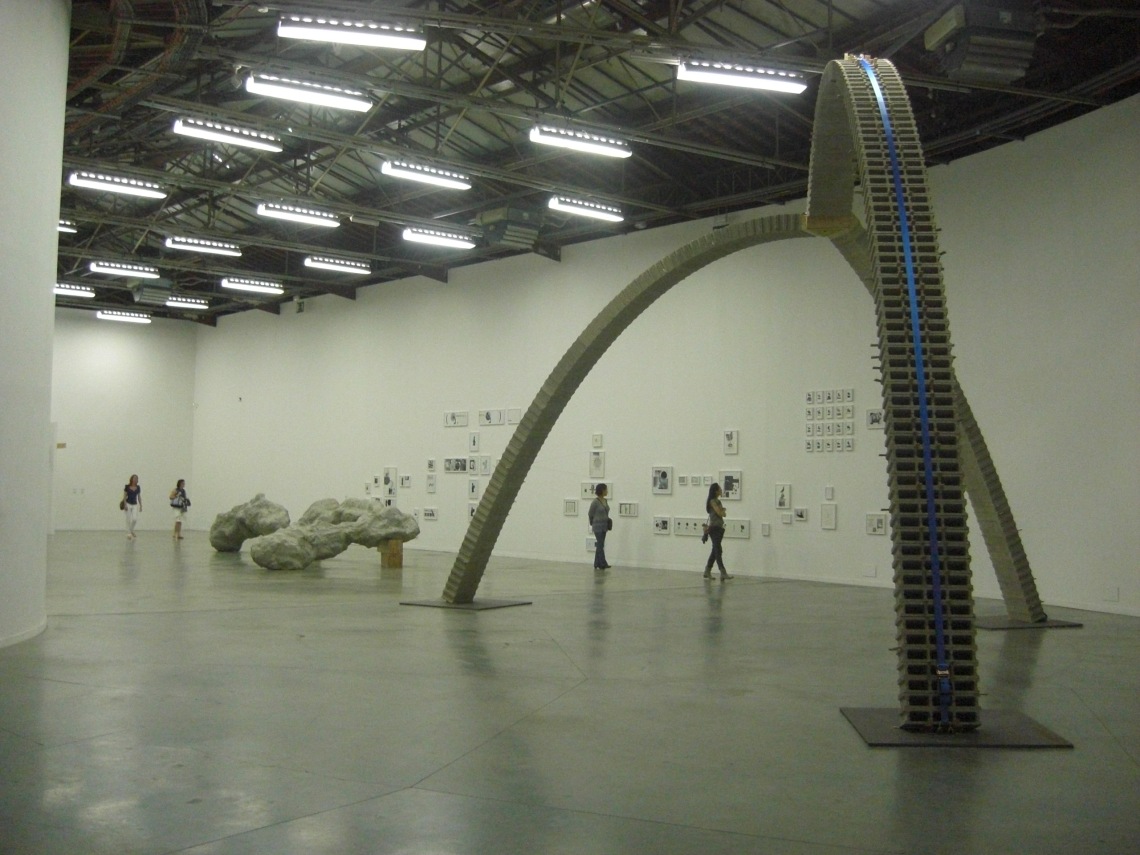 Some works were incredibly raw, still in the process of being conceptualised. Others were truely refined, with a cocky sense of confidence and a pinch of self-righteousness. A complete mixture and cacophany of what the French art scene stood for today. It was an engaging exhibition, differing greatly to what the contemporary Chinese art scene represents now, which I referenced in my head in a comparative sense. It did make me think that these art scenes where literally, geographically and conceptually worlds apart, and to display them together could introduce some interesting dialogues. After this art fix for the day, I headed to the Eiffel Tower to help the organisers of the London to Paris bike ride, Tall Stories, set up for the big finale! Meeting all these inspirational characters, including a Big Issue vendor called Adrian who is now a photographer,  seeing RJW and every single other participant finish the three-day ride, gave you such an immensely undescribable, emotional, silencing feeling. Thinking about it now brings back that feeling and makes me stop.

I just thought I’d mention this artwork that we found on the final day (before watching the Tour de France finish) whilst heading to the Gare de Nord to drop off our luggage. We came across this wall vinyl decal artwork by artists Thomas Geffrier and Samon Takahashi called “À L’APPROCHE”. Where you see RJW touching the wall is the edge of the image. It is a complete illusion and a clever use of photography. I can’t seem to find anymore information online about it though.

Paris was an emotional journey which made me realise that if you “look out for hope” no matter what has just happened, if you are determined and positive as well as committed you can put your mind to anything and do it. Watching, motivating and supporting RJW’s cycle from London to Paris made me believe anything and everything is possible, and how he and all these other cyclists really have changed and impacted other peoples lives courtesy of raising money (nearly £55k so far, the target is £80k) for The Big Issue. Everyone deserves a chance right? It just makes me question what I’m doing right now, when there is so much going on in the world that needs saving, helping and changing.